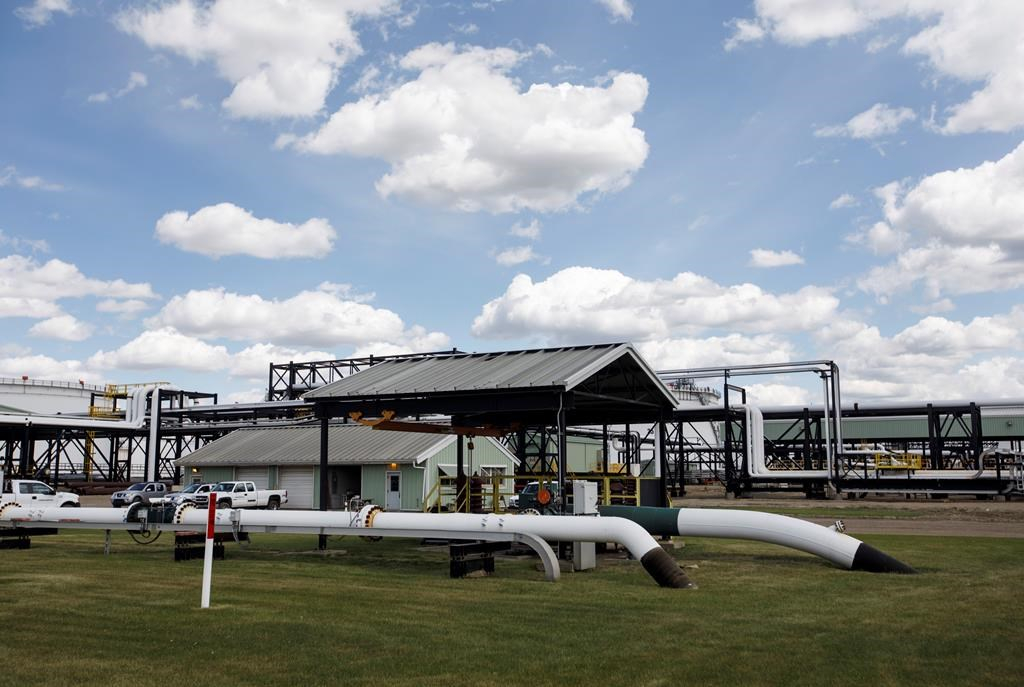 Kilometre 0 of the Trans Mountain pipeline system at Kinder Morgan terminal in Edmonton is shown on Tuesday, June 5, 2018. File photo by The Canadian Press/Jason Franson
Previous story
Next story

A report that says the Trans Mountain pipeline system has earned net income of $29 million in the 19 months since it was purchased by Ottawa relies on faulty accounting, according to a vocal critic of the project.

The oil conduit running from Edmonton to the Vancouver area had operating revenues of $728 million, mainly from user tolls, since it was purchased in the fall of 2018 from Kinder Morgan Canada for about $4.4 billion, according to an online analysis from the Office of the Parliamentary Budget Officer posted Wednesday.

The report, based on numbers from Canada Development Investment Corp. — which owns the pipeline on the government's behalf — notes operating expenses of $366 million, financing costs of $223 million and a $172-million depletion and depreciation expense on the pipeline assets.

Those were offset in part by a $61-million tax recovery thanks to a decrease in Alberta's corporate tax rate as well as lower income taxes for the period ended March 31.

"An increase in construction costs or changes in the price of oil could affect profitability but for the first months up to March 2020, the pipeline seems to have been profitable," said Parliamentary Budget Officer Yves Giroux in an interview.

In a report last November, the Cleveland-based Institute for Energy Economics and Financial Analysis charged that Trans Mountain is receiving hundreds of millions of dollars in hidden direct and indirect federal and provincial government subsidies.

It listed the Alberta tax cut as a subsidy even though it applies to all businesses and said the project also benefits from lower-than-market interest rates given its high level of risk.

The Department of Finance, however, responded at the time that the government does not consider any part of its investment in the pipeline to be a subsidy.

"This (report) is a very narrow focus and does not include the massive subsidies that have been offered to the project, direct and indirect subsidies," said IEEFA financial analyst Kathy Hipple on Wednesday.

In February, Trans Mountain announced a revised construction cost estimate for its expansion project, bumping it up by about 70 per cent from $7.4 billion to $12.6 billion.

A report that says the Trans Mountain pipeline system has earned net income of $29 million in the 19 months since it was purchased by Ottawa relies on faulty accounting, according to a vocal critic of the project.

In spite of the increased cost and the dramatic downturn in oil prices this year due to the pandemic fuelled economic downturn, the pipeline has not written down its goodwill, although oil producers have recognized billions in such writedowns, Hipple said.

"This is astonishing to me," she said.

But Giroux defended the numbers, noting that pipeline economics are different than oil production economics.

"The issue of oil prices could affect future revenue but the tolls are being determined by the Canadian Energy Regulator so tolls are not as dependent on the price of oil itself," he said.

"They're dependent on the volume, so as long as Trans Mountain has secured contracts to fill the majority of its expanded capacity, revenues should not be too much at risk."

The PBO added the CDIC has revised the sensitivity analysis it uses to determine goodwill impairments.

It previously provided estimates for the impact of a 10 per cent increase in construction costs or a one-year delay in construction, along with higher interest rates.