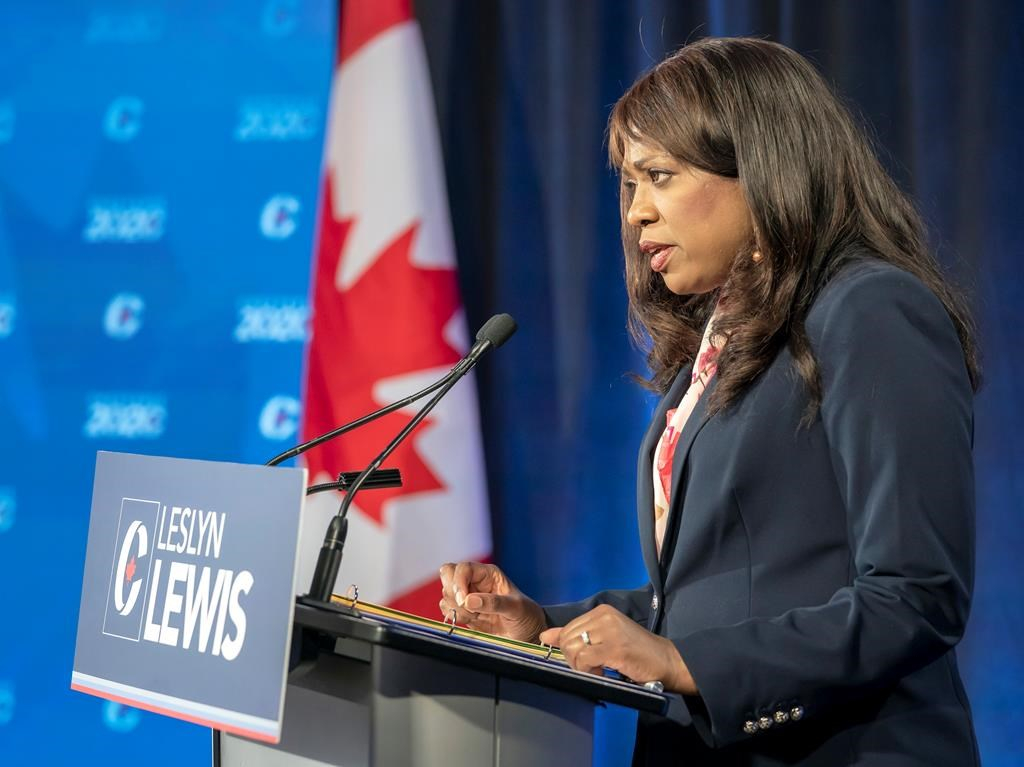 Conservative Party of Canada leadership candidate Leslyn Lewis makes her opening statement at the start of the French leadership debate in Toronto on Wednesday, June 17, 2020. File photo by The Canadian Press/Frank Gunn
Previous story
Next story

A new media organization's plan to host all four Conservative leadership candidates for a debate Wednesday was thrown into disarray when two of the contenders dropped out.

Leslyn Lewis announced hours before the Toronto event her doctor had ordered her to stay away because she is battling an ear infection and has a fever, though she has tested negative for COVID-19.

Shortly after, Peter MacKay declared he wouldn't go either, saying it wouldn't be fair if only three of the four candidates were onstage, and called for the event to be rescheduled.

The event was organized by the newly formed Independent Press Gallery of Canada, run by Candice Malcolm, a conservative columnist and analyst.

They decided to go forward with back-to-back "fireside chats" with the two remaining candidates, Erin O'Toole and Derek Sloan.

Lewis is ill and organizers wish her well, Malcolm said, but MacKay, who lives in Toronto made a choice.

"Leadership is about resiliency, courage and trust and voters can judge for themselves what they think of Peter MacKay's last minute decision to renege on his commitment and abandon this event," she said.

In his statement Wednesday, MacKay said he had been in debate prep when he learned Lewis couldn't make it.

"I was looking forward to taking part in tonight's debate to articulate my positive vision for the figure of the Conservative party and because of the role the Independent Press Gallery is taking in promoting free and fair speech," he said.

Lewis said missing a chance to participate in a debate hosted by the organization was a disappointment.

"I want to thank the Independent Press Gallery for their understanding, and I look forward to continuing to connect with voters from my home over the next little while I recover and am able to meet with people in public once again," she wrote.

A new media organization's plan to host all four Conservative leadership candidates for a debate on Wednesday, July 29, 2020, was thrown into disarray when two of the contenders dropped out.

The debate comes as Conservative party members are filling out their ballots and sending them back by mail to party headquarters. The deadline for them to be returned is Aug. 21, and a winner is to be announced shortly after.

Lewis has been making steady gains in the race since she entered as a relative newcomer earlier this year.

Many party members have been posting photos of their marked ballots on social media, and while those are just a fraction of the 269,000 people eligible to vote, it has become common to see her name marked in second place on the ranked ballot the party uses.

While MacKay has aimed his campaign at the centrist voters within the party, Lewis, O'Toole and Sloan are competing for voters from more right-wing side of the party.

For all three, a key objective for Wednesday had been to make the case for a first-choice ranking on the ballot by contrasting themselves with their rivals in front of an audience largely expected to be long-time grassroots party members.

Instead, moderator Andrew Lawton did one-on-one interviews with Sloan and O'Toole individually.

He pressed them on a range of issues including whether more "conservative" judges need to be appointed, why free-market conservatives still support government regulations of some agricultural commodities, their approaches to immigration and party and national unity.

The Conservative party did host two official leadership debates in June and all four candidates appeared at those, which were broadcast by the party and multiple national news organizations.

The one organizing Wednesday's event grew out of the last federal election.

Lawton, along with Malcolm and several others, is part of the True North Centre for Public Policy.

The centre, a registered charity, describes itself as a non-governmental, non-partisan organization conducting research and investigative journalism.

During the 2019 election, True North and Rebel Media were denied access to the official leaders' debates on the grounds they were advocacy groups, not media outlets.

They went to court to fight for accreditation and won. The experience, Lawton said Wednesday, prompted the creation of the new organization as a home for independent media.

To be a member of the new gallery, journalists must sign a declaration they will not accept any government funding, and sign onto a statement of journalistic ethics and principles.

What kind of relationship Conservatives have with Canada's right-wing media outlets has long been under scrutiny.

In the 2017 leadership race and after, many stopped doing interviews with the Rebel after several controversies involving reporters for the outlet appearing to promote racist theories and ideas.

In this campaign, Sloan and Lewis have done one-on-one interviews with the Rebel, and both they and O'Toole have sat down with True North.

During the event Wednesday, Sloan said his campaign is now just largely ignoring media requests from mainstream outlets as they don't help his efforts to reach conservatives.

In mid-May, True North had published a piece attacking MacKay for refusing to sit down with its reporters for an interview, accusing him of being afraid to face their reporters.

MacKay has granted interviews to other conservative outlets, his campaign says. He has also skipped out on other leadership debates, including two hosted by groups of Conservative riding associations in both B.C. and Ontario.

He cited scheduling conflicts in both cases.