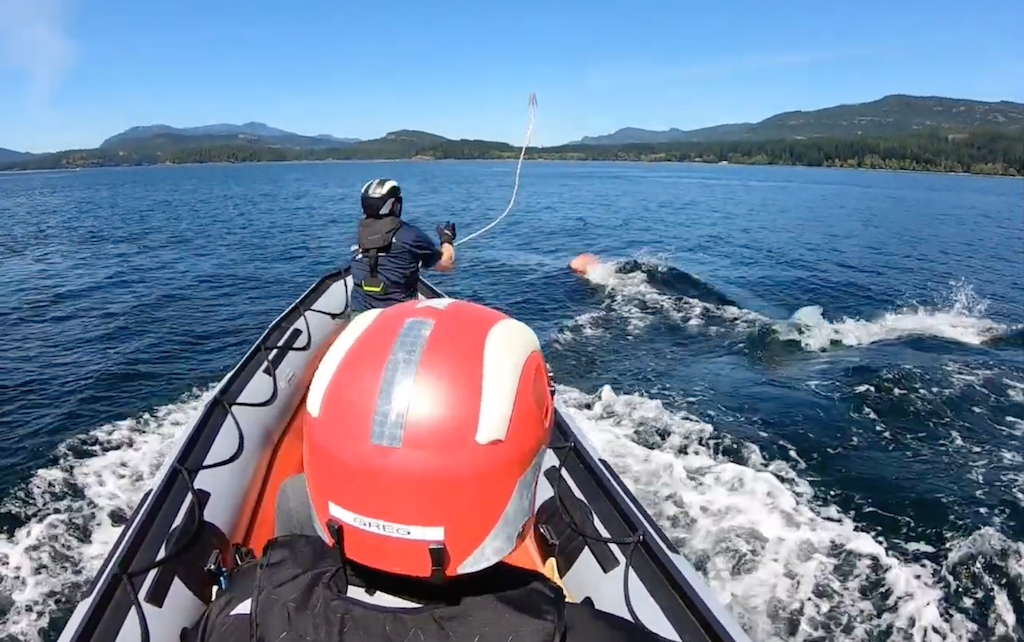 “It’s been a real roller-coaster,” said Paul Cottrell, Pacific marine mammals co-ordinator for the Department of Fisheries and Oceans (DFO), on Wednesday.

Three humpback whales caught up in fishing gear have been reported off the east and north coasts of Vancouver Island to DFO’s marine rescue hotline since Saturday.

Its water rescue team is small, but it is scouring the inside passage off east Vancouver Island daily to help the whales, Cottrell said.

They removed some gear off one whale named X-Ray, and attached a satellite-tracking buoy to the mammal. But the equipment is not sending signals correctly, Cottrell said.

But the DFO team and its rescue network have never dealt with so many whales in distress at once, Cottrell said.

“This is exceptional,” he said. “Three is a record for us. We're doing the best we can, and we have a great broad team of people helping.”

“It’s been a real roller-coaster,” said Paul Cottrell, DFO marine mammals co-ordinator on the struggle to save three distressed humpback whales entangled in fishing gear off the coast of B.C.

One of those teams pitching in is the Marine Mammal Response Network, a coalition of citizens and research, conservation and outreach groups along the coast.

The network is on high alert to try locating the whales in hopes they can be rescued, Cottrell said.

DFO or Canadian Coast Guard flights in the region are also scanning for the whales.

But time is crucial when saving whales wrapped in gear, which can expose them to infection and make swimming and eating difficult.

Cottrell is urging the public, particularly boaters or commercial fishers, who see marine mammals in distress to call the DFO's Marine Mammal Incident Reporting Hotline at 1-800-465-4336.

“There's a lot of eyes and ears out there,” he said.

“It’s so important that if people see an entangled whale that they know to call us, and we can get there as soon as possible.”

But, it’s that critical boaters who spot an entangled whale don’t try to help by removing gear, Cottrell stressed.

Tristan Ray-Wilks, a director at CETUS Research and Conservation and Society, agreed with Cottrell, saying well-meaning but misguided attempts by the public to help whales can make things worse.

Not only is it dangerous, but removing floats or gear can further endanger the animal by making harder to spot and identify what is wrong, said Ray-Wilks.

It can also make a rescue by professionals more difficult or even impossible.

Ray-Wilks was on the water in the area and assisted DFO when the first report came in about an entangled whale off Quadra Island.

They located Checkmate, but it appears someone had cut away or partially removed some of the gear on the surface of the water, he said.

Now a rope and a trap are tightly affixed to the humpback’s body.

And it will be a very difficult task to get loose because now the whale is less visible and rescuers can’t easily access the gear.

“The unfortunate thing with a lot of these entanglements is the public may want to help by cutting off (gear),” Ray-Wilks said.

“But by cutting off a float, you're almost sealing the animal’s fate, because now looking at it at the surface... there's no visible entanglement.”

Rescuers stayed with Checkmate as long as they could Saturday, but the whale has not been sighted since.

The ropes, floats and trap trailing behind and wrapped around X-Ray were more visible.

As a result, Cottrell was able to attach a satellite-tracking buoy and safely cut away a lot of the gear.

However, none of the reported whales have been located again since Sunday, Cottrell said, before heading out on the water again Wednesday.

The third unidentified humpback, caught in a fishing net, will be even harder to find because it’s farther north off B.C.’s less-populated central coast, he said.

The number of whale entanglements in recreational and commercial fishing gears is skyrocketing, as whale numbers returning to the region grow, said Jackie Hildering, director for the Marine Education and Research Society (MERS).

The risk to whales is so high that 50 per cent of humpbacks observed of B.C.’s coast have scarring from being entangled in fishing gear, said Hildering.

That data doesn’t give any indication of the number of whales that have died as a result of being caught in gear because their carcasses will often sink, said Hildering.

The region’s humpbacks are named based on their distinctive patterns or marks, she said.

It’s important for observers to try to note or take photos of the markers or patterns on an entangled humpback's fluke, dorsal fin, or belly so they might be more easily identified.

“That way, there’s a better chance of making informed decisions about where to look for them,” said Hildering.

Both Checkmate and X-Ray are juvenile humpbacks known to frequent the inside passage around Campbell River, the Discovery Islands and up to the north end of Vancouver Island, she said.

X-Ray was last seen near Kelsey Bay with an adult humpback named Slits on Sunday.

The best chance for all the whales is for people to call in detailed reports about any sightings but to not approach them to help, said Hildering, adding humpbacks roam hundreds of kilometres and B.C. waters were extensive.

“Those who are on the water are crucial, essential, because entanglement is a such a threat,” said Hildering. “But it’s essential they know what to do — and more importantly, what not to do.”