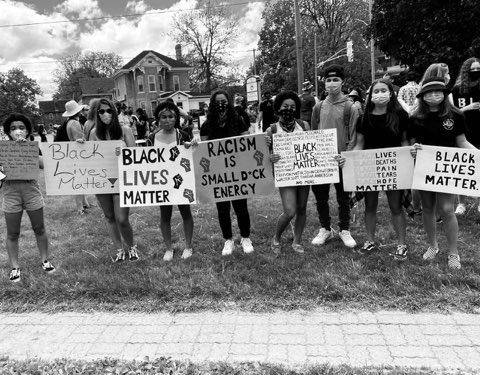 Morgan Reevie doesn’t want to return to the classroom come September, but it’s not the COVID-19 pandemic that worries the Grade 11 student.

She fears she will experience more anti-Black racism.

Reevie says it's something school administrators at I.E. Weldon Secondary School in Lindsay, a small town near Peterborough, Ont., have done little to confront.

“I don't want to go to school anymore,” she said. “I used to like school, but it makes me just want to stay home and do online schooling.”

Reevie said she will give the classroom another try, but that a lot of her friends of colour have decided to learn online instead.

The experiences of Reevie and other Black students at Weldon are a snapshot into a wider problem that racialized students say plays out in schools across the province.

Black students, especially boys, are much more likely to be pushed out of school or directed away from university in a process education experts say can begin in elementary school and involves teachers and administrators who underestimate or even fear them.

Reevie said that low-level discrimination from other students developed into something more serious in the wake of last year’s revelations that Prime Minister Justin Trudeau wore blackface and brownface in 2001 while he was a teacher, and earlier when he was still in high school.

A student who complained about the racist behaviour of some of her peers at an Ontario school says the inadequate response from administrators emboldened further offensive behaviour.

Soon after, several students took photos of themselves in the school hallway and applied blackface filters before sharing them on the social media app Snapchat. When this was brought to the school's attention by some Black students, they were told to get over it, Reevie said.

Three weeks later, the involved students were invited by the school to discuss the incident, but one of the main protagonists didn’t show up, Reevie said. The school did not reach out to those who brought the complaint again, and appeared to do nothing else about it, she added.

“They had a healing circle to try to talk about the racism, but it wasn't made mandatory for the students who were involved,” Reevie said.

The lack of consequences seemed to embolden that student and others, she said, and they started saying the N-word in the hallway, sharing more blackface photos, and saying ignorant and offensive things in relation to the death of George Floyd and the subsequent U.S. protests against police brutality in group chats during the COVID-19 lockdown.

“I think that's what led to him being ignorant and saying racist things again, because the first time, the school didn't make it mandatory for him to show up. They called him into the office and basically said, ‘Let's not do that again’ and sent him back to class,” she said.

The students in the original photo and the one who Reevie said did not attend the meeting all declined to comment for this story.

Reevie said the school did not act on these subsequent incidents either, despite the complaints she and other students raised.

In fact, she said Black students would get in trouble for standing up against the racism they experienced, with one being told they were creating a “hostile environment” by confronting another student in the hallway.

In response to emails laying out Reevie's complaints, Este said disciplinary matters are not public information, and he wouldn't speak about specific incidents or students. Asked to respond to the broader question of whether the school adequately addresses instances of racist behaviour by students, Este said concerns had been raised recently by several students and community members about Weldon and other schools in the Trillium Lakes District School Board.

“This is not only a school-based concern as we are aware that systemic racism exists in our community,” he said in an email.

“Any time school administration is made aware of any racist behaviour by students, it will be investigated and there will continue to be consequences based on our code of conduct,” he added. “I can assure you that student behaviour is addressed when we are made aware of it. We also do thorough investigations, which take time and do not just have a knee-jerk reaction to any type of inappropriate behaviour in the school, regardless of what it relates to.”

He said that because the school does not share information about consequences given to students “the perception may be that an issue has not been addressed.”

“Racism is not tolerated, and will not be tolerated, at our school,” he concluded. “If I am made aware of any racialized, stigmatizing behaviour by any of our students, it will be addressed immediately.”

Cossarin, the former long-time Weldon principal, also said the Trillium Lakes District School Board has a code of conduct that includes steps for progressive discipline and that racist behaviours are covered by the code.

Catherine Shedden, a spokesperson for the board, said she couldn't speak to the specific allegations, citing student privacy. But she said it is “strongly encouraged” for those involved in a dispute to participate in “restorative practices,” and that parents would be informed in any instance where an infraction may have occurred.

“We take any incidences of racist behaviour or words very seriously, and we are also in the process of making sure that there is some professional development occurring in the new school year addressing equity with our staff and providing resources for them to bring into the classroom,” Shedden said.

Reevie said the board had responded constructively in recent weeks, and that she had been invited to take part in a Ministry of Education video conference call on steps the province is taking to confront racism.