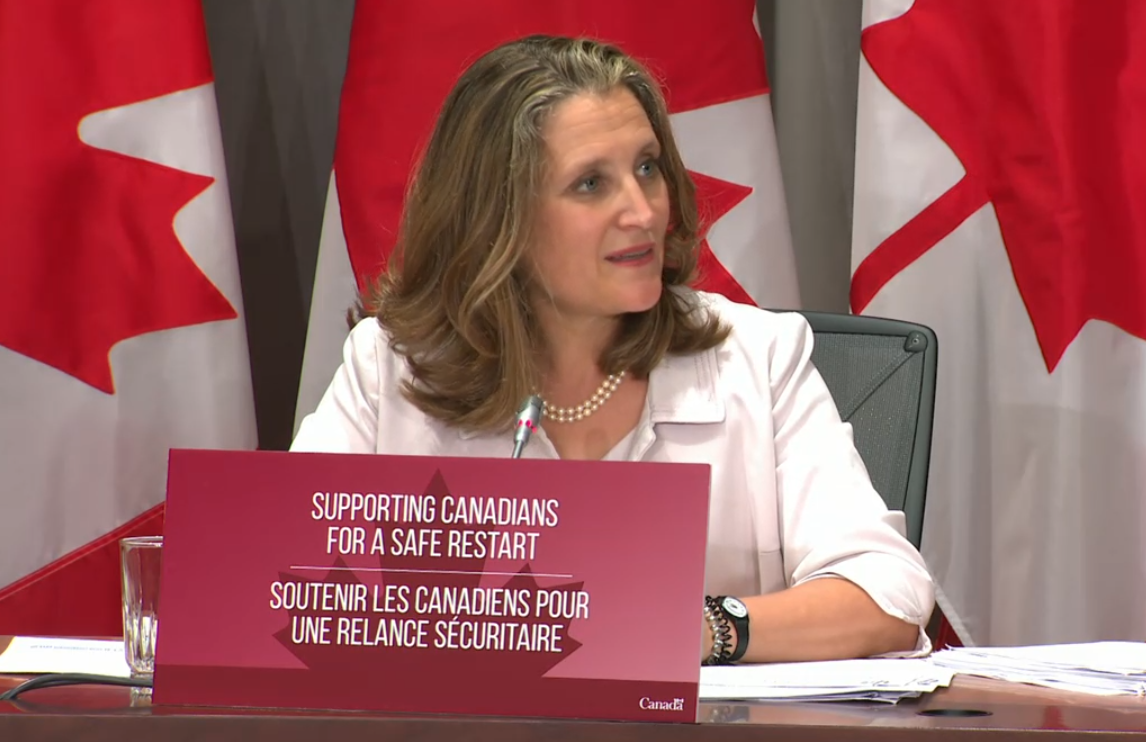 Finance Minister Chrystia Freeland announces changes to the federal government's relief program for workers who have lost work due to the COVID-19 pandemic on August 20, 2020. Screenshot of livestream.
Previous story
Next story

Ottawa told workers Thursday what will happen when their emergency benefits expire, but post-secondary students were left in the dark.

Both the federal worker and student relief programs created in the wake of the COVID-19 pandemic were due to expire at the end of August, but the Liberal government said it would extend the $2,000-a-month Canada Emergency Response Benefit (CERB) for four weeks before transitioning eligible workers to one of three new employment insurance (EI) schemes for another year starting Sept. 27.

Asked what would happen to the separate student benefit given the disproportionate impact the pandemic has had on youth unemployment, Employment Minister Carla Qualtrough confirmed it will expire at the end of the month.

She said students who have experienced job loss or reduced earnings because of COVID-19 can access CERB for the next month and pointed out the government was creating tens of thousands of jobs for young people, referring to changes to its summer jobs program announced in April.

“We're working really closely on student measures. We have $8 billion in play right now in our student package. Super proud of that,” Qualtrough said at a news conference, referring to the cost of the expiring program.

“But we know it's tough for students and we're going to keep working for them and with them,” she added, without providing further details.

The Canada Emergency Student Benefit (CESB) was added to Ottawa’s relief response in April and started flowing in May, trailing behind the CERB lifeline it created in response to the shutdown of large swathes of the economy.

Students have complained the amount is not enough to cover living expenses after many lost their prime summer earnings opportunities to the pandemic, which has shut down much of public life.

Canada will shift workers hit by job loss due to the COVID-19 pandemic from emergency benefits onto new recovery relief plans, but will let a separate payment for students to expire

Geneviève Charest, a spokesperson for the Canadian Federation of Students, said that when they asked the government several months ago about extending CESB, they were told returning students would have access to additional grants and loans, which she said would be insufficient.

“Many students will have to take on even more debt this year in order to pursue their studies,” Charest said, noting that international students are locked out of CESB and the grants and loans, making their situation even more precarious. 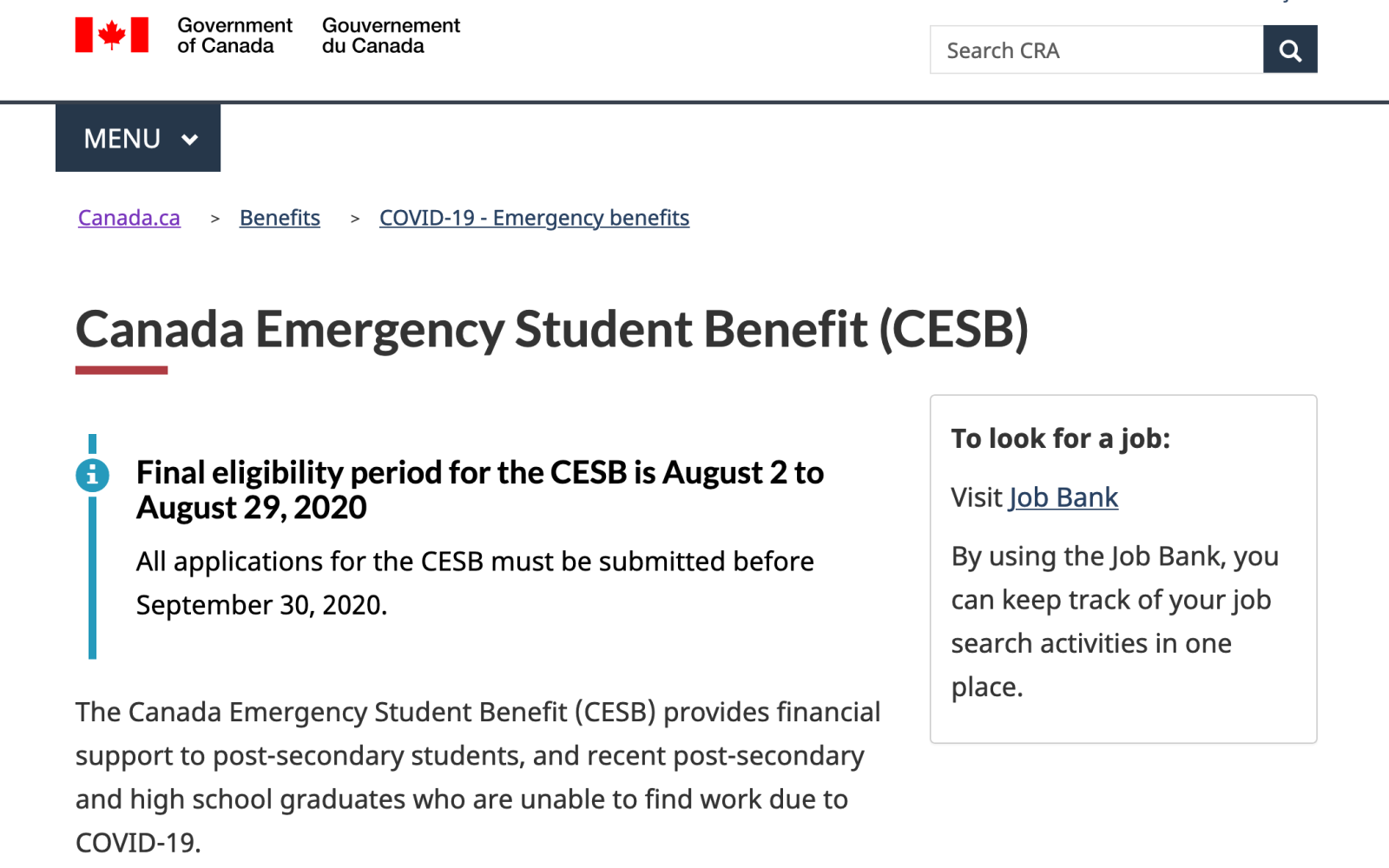 A screenshot of the landing page for the federal government's Canada Emergency Student Benefit website.

From emergency to recovery

The three new recovery benefits Ottawa unveiled Thursday are expected to cost $22 billion. The extension of CERB adds another $8 billion to the price tag, while additional EI costs are pegged at $7 billion, for a total of $37 billion.

“We are very clearly, and with a lot of notice to Canadians and to our counterparts at the other side of the House, laying out what we believe is the right thing to do for Canadians,” Freeland said.

The government is planning to introduce legislation to enact the measures, which will not happen until late in September since the government prorogued Parliament earlier this week.

The Opposition Conservatives said the news showed that Prime Minister Justin Trudeau did not have a plan to get Canadians back to work or to restart the economy.

“Shuffling Canadians between programs is not a plan,” MPs Dan Albas and Pierre Poilievre, the party’s employment and finance critics, said in a statement.

The three new schemes, which will be in place for one year, are a primary $400-a-week Canada Recovery Benefit for those still unable to find work due to the pandemic, and related $500-a-week sickness and caregiver benefits for those who miss work because they’ve caught the virus or must care for someone who has. Applications will open in October.

The new programs will also support those not eligible for regular EI, including the self-employed and those working in the gig economy.

Labour and business groups both tentatively cheered the EI changes, with Unifor noting it will reduce barriers to qualify, and increase the minimum benefit.

“Today’s changes are a relief for many workers in the short term, but EI has been so badly broken for so long that a full overhaul of the system is still absolutely critical,” said the union’s national president Jerry Dias.

“These temporary changes, critical now, have to guide more comprehensive improvements to EI that will benefit workers for generations to come,” he said.

The Canadian Chamber of Commerce also said the changes were positive, but much more was needed to restore the country’s economic health.

“While we support the need to assist families and individuals through the current crisis, the Canadian Chamber believes our priority must be getting Canadians safely back to work and ensuring the country’s long-term prosperity,” said Trevin Stratton, the chamber’s chief economist and vice-president of policy.

In a briefing provided to reporters ahead of the official announcement, government officials used the hypothetical example of a day camp counsellor who usually clocks some 900 hours of work from mid-June to the end of September, which makes her eligible for employment insurance.

With the pandemic leading to her hours being cut to 200 hours, she would not qualify for regular EI benefits.

Under the new plan, because this seasonal worker notched more than 120 hours of work, she can now qualify for EI regular benefits of a minimum of $400 per week for at least 26 weeks, the officials said.

The minimum duration of EI benefits was 14 weeks previously, while the maximum remains capped at 45 weeks.

Workers were required to have worked between 420 and 700 hours in pre-pandemic times, and would receive a benefit rate of 55 per cent of their average weekly earnings, up to a maximum of $573 per week in 2020.

In a bid to encourage people to return to work, the government will also cancel a cap of $1,000 a month on allowable earned income and replace it with a reduction of 50 cents of recovery benefit for every dollar earned.

Any overpayment will be clawed back when recipients file their annual income tax return, the officials said.

Editor’s note: This article was updated at 5:35 p.m. on August 20, 2020 to include comments from Freeland and Qualtrough and representatives from the opposition Conservatives, the Canadian Federation of Students, Unifor, and the Canadian Chamber of Commerce.