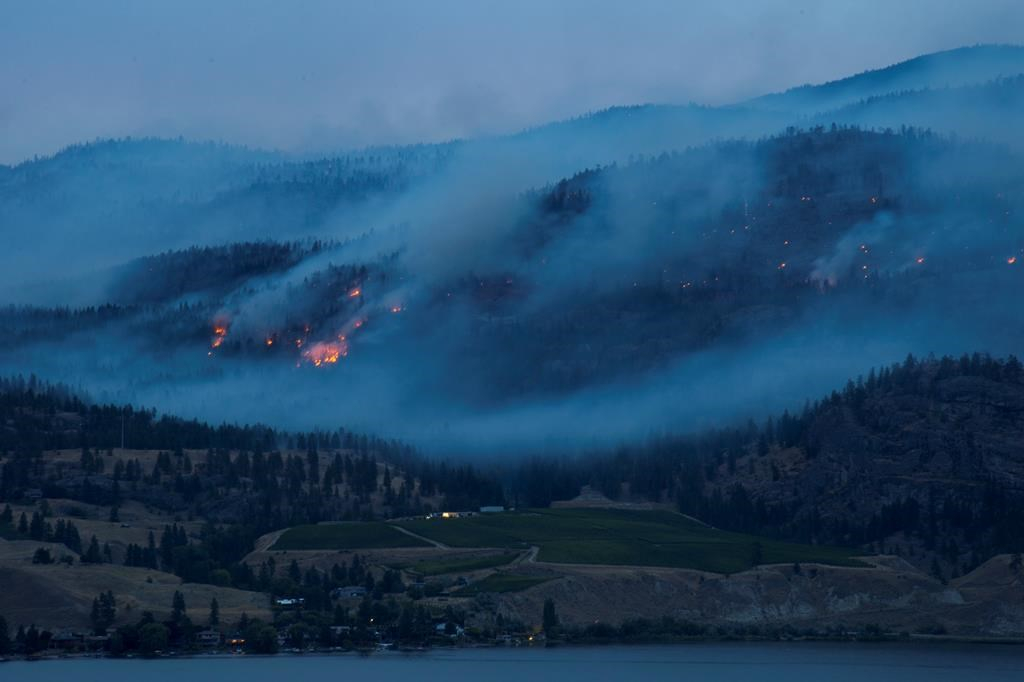 Flames and smoke are seen from the Christie Mountain wildfire along Skaha Lake near Penticton, B.C. on Thurs., Aug. 20, 2020. Wildfires in the area have forced several thousand people to be on evacuation alert. Photo by The Canadian Press/Jonathan Hayward
Previous story
Next story

Residents who live near a massive wildfire in British Columbia's south Okanagan were asked to prepare in advance Thursday, as strong winds forecasted for Friday threatened efforts to contain it.

The 20-square kilometre wildfire already destroyed one home and forced residents on 300 other properties to leave this week, while another 3,700 properties near Penticton remain on alert.

"If we get strong winds then our lines will be challenged for sure," Mitch Pence of the B.C. Wildfire Service told a news conference Thursday.

The so-called Christie Mountain fire is among a surge of wildfires that have flared this week, ending what had been a quiet wildfire season.

The BC Wildfire Service says of the 543 fires recorded since April in British Columbia, more than one quarter have been sparked in the past seven days.

The service's website shows many of the 154 fires this week were caused by lightning, and almost three dozen are listed as out of control.

Cooler temperatures and light winds helped a team of firefighters make what the wildfire service called "great progress" building a guard on the flank of the fire closest to homes near Penticton.

The fire broke out in a gully Tuesday and whipped up the side of the mountain thanks to a "perfect mix" of weather and topography, fire information officer Nicole Bonnett said Thursday.

About 100 ground crew and 13 helicopters worked to contain it Thursday but the difficult rocky and sloped terrain has created challenges for ground crews, while poor visibility Wednesday limited their ability to fight it by air.

"It is burning in some pretty nasty terrain, it's pretty rocky, pretty steep. I believe the area is fairly well known for rock climbing, which gives you an idea of how steep it is," Bonnett said.

Residents who live near a massive wildfire in British Columbia's south Okanagan were asked to prepare in advance Thursday, as strong winds forecasted for Friday threatened efforts to contain it.

The area closest to homes had reduced to a low smoulder, but the winds could push the blaze closer to property, she said.

Although evacuees are typically asked to register with emergency services once they leave home, Penticton officials asked those in the alert zone to register online or by phone now so that they could start identifying those who would need accommodations, transportation and access to medication if the alert is upgraded to an order.

The cause of that fire is listed as under investigation, while two other fires caused by lightning continue to create problems.

B.C.'s deputy provincial health officer Dr. Reka Gustafson said Thursday health officials have been planning for a few months for the potential that people would be forced from their homes by fire during the pandemic. She said the usual precautions apply.

"So, to make sure that those activities include the prevention measures that we need to have, such as hand hygiene and appropriate separation."

Gustafson said that to her knowledge, no one who was ordered to leave their home because of the Penticton wildfire was sick or self-isolating because of COVID-19.

Ten properties were ordered evacuated Wednesday night in southeastern B.C. as a wildfire near Canal Flats chewed through four square kilometres of bush, while crews began seizing control of a fire burning close to the southern Interior community of Beaverdell.

They had made good progress establishing control lines by Thursday afternoon and classified the 17.5-hectare fire as "held," meaning that sufficient suppression action had been taken so the fire was not likely to spread.

Environment Canada has issued an air quality statement warning of smoky skies over the south Okanagan and Boundary regions.

It advises people with asthma or anyone with a chronic condition to stop or reduce activity levels if wildfire smoke makes breathing uncomfortable.

The weather office called for a 60 per cent chance of showers with a risk of thunderstorms in the Penticton region Friday afternoon.