Montreal-area kids back in school, parents and teachers nervous about it 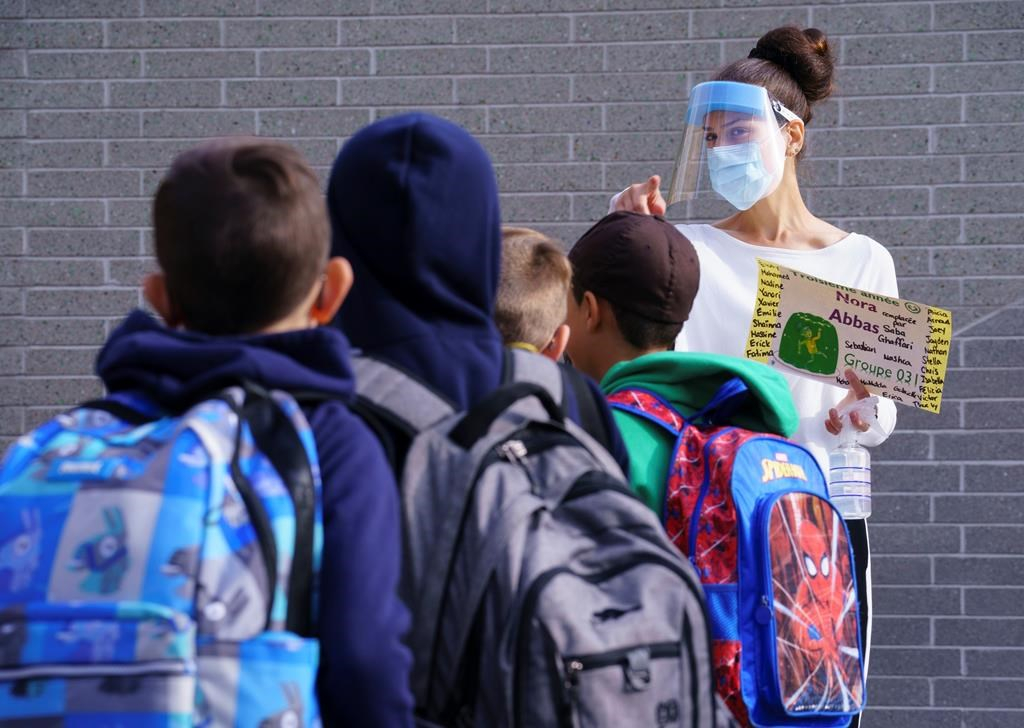 A teacher wearing protective equipment greets her students in the school yard at the Philippe-Labarre Elementary School in Montreal, on Thursday, August 27, 2020. Photo by The Canadian Press/Paul Chiasson
Previous story
Next story

As tens of thousands of Montreal-area children returned to class Thursday for the first time since the emergence of COVID-19, government officials spent the day trying to reassure parents and teachers following reports of a few infections connected to schools.

Outside Philippe-Labarre elementary school in the city's east end, many parents expressed mixed feelings about the return to class. There were happy cries of welcome as children were reunited with mask-wearing teachers, who directed them to walk under an arch made of balloons and into separate lineups.

"I think we all have a little bit of fear of what's unknown, but I don't freak out about it," said Cora Bridgeo, who has children starting first and third grade. "I have confidence in the government. I have confidence in our school system, they put a lot of measures in place."

The back-to-school period will test the government's pandemic plan, which has faced criticism from some doctors and parents' groups.

Already on Thursday morning, officials announced three employees at three separate east-end schools in Montreal had tested positive for COVID-19. Valerie Biron, a spokeswoman for the east-end school board, Centre de services scolaires de la Pointe-de-l'Ile, said the infected personnel were not in contact with students and immediately went into self-isolation.

The three staff members got tested on their own initiative, Biron said, "because they had either been in contact outside the school with an infected person or because they were experiencing symptoms." Biron said the board is asking employees of the three schools to get tested if they think they could have been infected.

A large teacher's union said Thursday there was a fourth case involving a staff member at a school on Montreal's north shore. Later in the day, a private high school south of Montreal sent an entire class home after learning a child's parent had tested positive for COVID-19.

"I don't want people to think that every time there is going to be a case, particularly a case that is not in school, but who is a parent, we will stop education," Arruda, director of national health, said.

Back at Philippe-Labarre, officials said kids can expect lots of hand-washing, some mask-wearing and hallways and schoolyards sectioned off with tape to prevent extra mingling. Each roomful of kids will be kept in a separate bubble and masks will be required in hallways and in common areas for children in Grade 5 and up.

Quebec Education Minister Jean-Francois Roberge told reporters on Thursday, August 27, 2020, most teachers and students are excited to be back at school.

But Robert Gendron, a spokesman for Montreal's largest French-language school board, said in many ways things won't change.

"There will be a teacher with the same number of kids in the class," he said in an interview outside the school. "They will attend all the classes that they regularly attend. We will be able to transport the kids on the bus at the same level we're always doing."

The government has faced criticism from groups who say the plan doesn't go far enough and doesn't include a distance-learning option for parents who prefer to keep their children home.

More than 150 doctors and scientists also published an open letter this week urging Francois Legault's government to require social distancing within classrooms, mask-wearing for all students, and to oblige schools to screen children for symptoms of COVID-19.

Their voices have been added to those of parents' groups, who have expressed concerns over large class sizes, poor school ventilation systems and a lack of online options.

But at Philippe-Labarre, several parents said they felt it was important for their children to regain a school routine, and expressed confidence in the government's plan despite their worries about COVID-19.

Bridgeo said the isolation brought on by the pandemic had been hard for her children, and said she felt it was important for them to see their friends and classmates. She also praised the school for its efforts to reassure and communicate with parents.

Her daughter, Eva, said she was excited to be back at school to see her friends and teachers. She said she was ready to follow safety rules, such as "wear a mask, put gel on your hands, distance."

Hicham Mekkaoui, standing in line with his six and 10-year-old children, seemed less sure.

"We're a little stressed this morning because it's not easy coming back to school during a pandemic, but we have no choice, we have to respect public health," he said. Mekkaoui said he would have felt more comfortable with more physical distancing in the classroom, but he believes the teachers will do their best.

Legault's government has said the plan was developed with health and education experts, who agree that attending school is the best thing for children's well-being. Government officials have noted that elementary schools outside Montreal opened in May without a large spike in cases.

Quebec Education Minister Jean-Francois Roberge told reporters Thursday most teachers and students are excited to be back at school.

"What I'm told is that it's not yet perfect everywhere of course — because it's new, because we're adapting — but that it's going well," Roberge said.

For the time being, the education department has banned team sports, among other after school activities, saying students need to remain in their classroom bubbles. But the province said it plans to review those restrictions in a few weeks.

Teachers' unions have also raised concerns that the pandemic will exacerbate an existing teacher shortage at a time when more resources are needed to deal with the pandemic.

A spokesman for one union said many teachers have retired early or have been exempted due to medical conditions, leaving Montreal's largest school district missing hundreds of staff members as the year starts up.

Gendron said that as of Thursday morning, 75 of the school district's 69,000 students had requested an exemption due to a medical condition. He said 379 of 9,000 teachers have also requested to stay home. It was too early, however, to confirm how many parents have chosen to opt for home-schooling, he said.