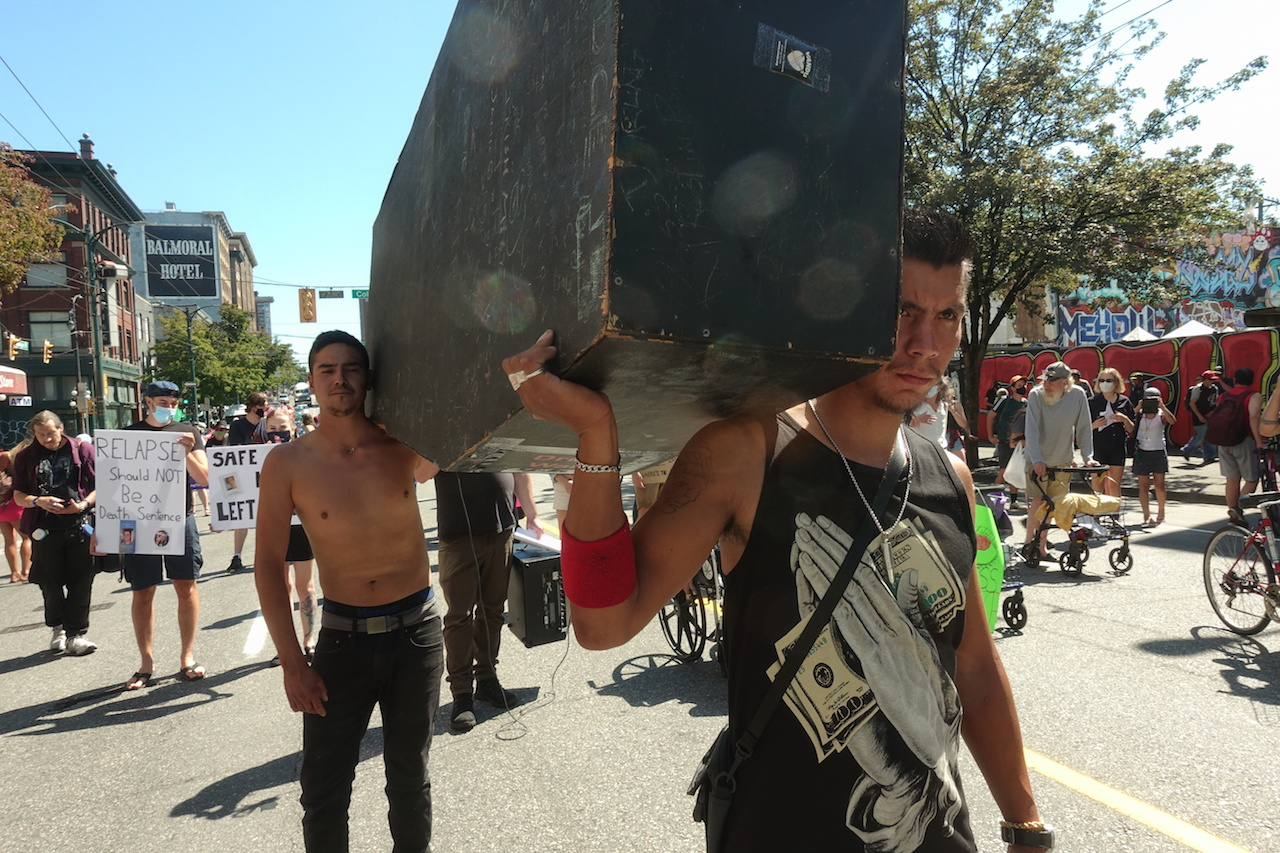 Young men carry a coffin to show the lives lost to overdoses from toxic street drugs at a memorial march organized by the Vancouver Area Network of Drug Users (VANDU) that called for safe supply and decriminalization. Photo Nathaniel Canuel.
Previous story
Next story

The B.C. government should take its own steps to decriminalize illicit drug use to help stem surging overdose deaths instead of calling on the federal government to do it, say disillusioned advocates.

Fatal overdoses due to toxic street drugs continue to mount during the pandemic, with 175 dead in July, according to data last week from the BC Coroners Service.

But Horgan’s call on Ottawa is a “shell game” to distract the public from what the province could be doing to decriminalize simple possession, said peer advocate and broadcaster Garth Mullins.

Instead, she recommended B.C. take its own steps on the issue as one means to address the overdose public health emergency.

“Anytime the Premier of B.C. opens his mouth to call for (federal) decriminalization, it comes with a lot of subterfuge,” Mullins said.

“If he's saying he's pro decriminalization, he's not, because he's not using his own powers to do it.”

The province could have acted on Henry’s recommendations last year, added Mullins, a member of the BC Association of People on Opioid Maintenance (BCAPOM).

“So, to see senior members of the provincial government walking out and wringing their hands about the overdose numbers when there are moves that they could make, and that they’ve known they could make for some time, and haven’t – that rings false,” Mullins said.

“You can only imagine how many people have died because someone was too afraid to call the ambulance because the cops might also show up,” peer advocate David Clarke on how criminalization of illicit drug use contributes to B.C.'s overdose deaths.

Henry’s decriminalization report, Stopping the Harm, provided a blueprint for provincial action, that could bypass the need for the federal government to make changes to the Controlled Drugs and Substances Act (CDSA), said lawyer Scott Bernstein, of the Canadian Drug Policy Coalition.

The province’s failure to act on Henry’s recommendations around decriminalization and the overdose crisis contrasts sharply with its willingness to follow her every advice in dealing with the pandemic, Bernstein said.

“We will follow Dr. Henry off of a cliff for one public health emergency, but somehow she's just not credible when she offers advice about the other one,” he said.

Given the high numbers of overdose deaths across the province, Henry recommended the government act quickly.

“Immediate provincial action is warranted, and I recommend that the Province of BC urgently move to decriminalize people who possess controlled substances for personal use,” Henry stated.

The provincial government has lacked the courage to take bold action on the issue, Berstein said, adding public frustration is mounting as the province’s current response to the overdose crisis, only aggravated by the pandemic, is not working.

Bernstein thinks British Columbians are ready to abandon criminal enforcement as a means to address substance use issues.

“Our belief is that there is wider support within B.C. to decriminalize,” he said.

“The B.C. government appears to be very adamant in not making these changes and continuing to follow a criminal justice approach.”

“We've tried that for over 100 years and it's led us to disaster after disaster.”

The B.C. government will continue to urge Ottawa to use its powers to amend the federal drug act, the Ministry of Public Safety stated in an email to Canada’s National Observer.

“We believe this is the most effective way to tackle this crisis that continues to take so many lives,” the Ministry wrote, adding the B.C. government’s call echoes that made by Canadian police chiefs to Ottawa.

“Ultimately, decriminalization is up to the federal government as it is federal legislation,” the ministry added.

However, Farnworth sent letters to B.C.’s police departments in 2017 informing them simple possession charges were no longer a focus of the provincial government, the email added.

Also, In July the province also launched a special committee to examine and make recommendations around modernizing the B.C. Police Act.

“The special committee has been tasked with making recommendations on the role of police with respect to complex social issues, including addictions and harm reduction,” the ministry wrote. “So we will be looking at the best way to support vulnerable people and the police’s role in that.”

Criminalization of illicit drug use drives up the transmission of communicable disease such as HIV or Hepatitis C, stigmatizes those who use drugs, and increases drug related deaths.

All while having no effect at reducing drug use rates.

“You can only imagine how many people have died because someone was too afraid to call the ambulance because the cops might also show up,” said Clarke, who has participated in harm reduction in a number of Vancouver Island communities.

People arrested for simple possession or using illicit drugs are often dragged into a vicious cycle with the criminal justice system, Clark added.

Charges or incarceration for illicit drug use can impact an otherwise law-abiding person by creating barriers to employment or housing if they’re dependent on criminal record checks, he said.

And people with substance use issues on probation with conditions not to possess drugs constantly risk going back to jail and losing any progress made in establishing a new life over and over.

“Even with the best intentions, the system kind of works against you and keeps looping you back in,” Clarke said, noting the prohibition of liquor was abandoned by government.

If illicit drugs were treated the same as alcohol – a legal drug with a regulated, safe supply – stigma and fear would be reduced, and deaths from the toxic street supply would drop, Clarke said.

Island Health recorded 33 illicit drug overdose deaths in July, for a total of 165 deaths so far in 2020.

Across B.C, there have been 6,000 deaths since the province declared the overdose crisis a public health emergency in April of 2016, according to the B.C. coroner’s office.

Senior levels of government need to step up to provide safe supply and decriminalize drug use to stem the tide of overdose deaths, said Bernstein.

“Neither the federal government, nor the provincial government, are taking the reigns to say this is something we need to do given we’re in dual public health emergencies,” Bernstein said.

“People are dying. And we need to take some action.”

Ummm ... the Criminal Code is

Ummm ... the Criminal Code is a *federal* statute?