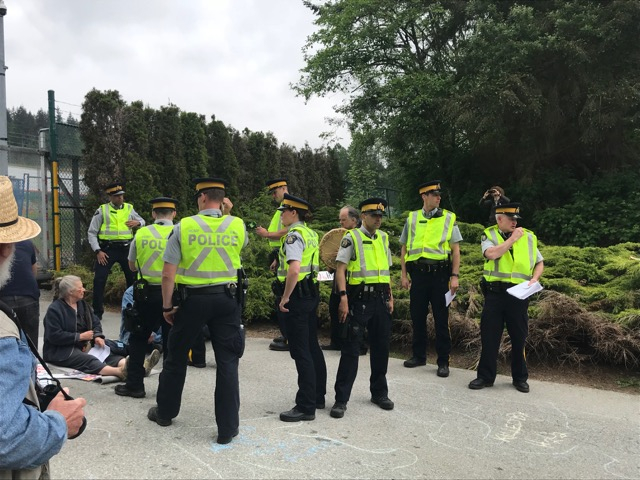 This photo shows Elan Gibson (seated), author, actor, activist and a spokeswoman for Burnaby Residents Opposing Kinder Morgan Expansion, on the day of her arrest at the Kinder Morgan tank farm gates on May 16, 2018. Photo by Susanne Jackson
Previous story
Next story

“Some of you may die, but it’s a sacrifice I’m willing to make.”
— Lord Farquaard in Shrek, the animated classic

Imagine living next door to an ammunition dump. Imagine going to bed knowing that the dump could blow at any moment, creating a fireball that consumes buildings outside its borders, including your home. Your children’s school is engulfed in flames and the only escape route from your neighbourhood has been blocked by a cloud of toxic smoke that makes escape impossible and death by inhalation likely.

Welcome to the lives of the folks who live and work on Burnaby Mountain, just below Simon Fraser University in B.C.’s Lower Mainland and close to the notorious storage tank farm at the end of the Trans Mountain (formerly Kinder Morgan) pipeline.

As faithful Canada's National Observer readers will know, there are many good reasons to oppose the expansion of this pipeline and its tank farm. The proposed expansion will mean a disastrous increase in greenhouse gas emissions, a death blow to hopes for reconciliation between Indigenous nations and Canada, and an end to hopes of Canada hitting our Paris Accord emission reduction targets. The increased tanker traffic through Vancouver Harbour demanded by the expanded pipeline will increase the risk of marine accidents, spilling toxic petroleum products into the harbour. (Full disclosure: I have been actively involved in opposing this project, and was arrested for civil disobedience at the tank farm gates in 2018.)

But for folks on Burnaby Mountain, the issue is also personal. The threat of a catastrophic boilover event occurring at the tank farm, sending a column of flaming oil and toxic chemicals high into the air and down onto nearby homes and schools is causing sleepless nights on the mountain. A boilover in a petroleum storage tank occurs when the contents have been set on fire and then burn down until the water accumulated at the bottom of the tank is turned to steam, creating a massive explosion. Boilovers have occurred around the world in tank farms like the one on Burnaby Mountain.

“I feel expendable,” said Emily Corenblith, who lives a short walk from the tank farm. “We’re in a sacrifice zone.”

Corenblith added that the sacrifices imposed on Indigenous peoples by fossil fuel infrastructure projects were much worse than those she and her neighbours endure. But still, “I feel like our well-being doesn’t matter.”

The pipeline and its Burnaby tank farm were a bad idea in 1953, when it was first built.

The notorious storage tank farm at the end of the Trans Mountain pipeline still scares residents.

The proposed expansion, hotly contested by Indigenous communities, environmentalists and threatened neighbours, is even worse. In addition to an increase in greenhouse gas emissions, the expanded pipeline increases the danger of oil leaks along its 1,150 kilometre route, threatening more than 1,300 watercourses. (For more detailed information about the proposed expansion and the Indigenous-led opposition, check out Protect the Inlet, at https://protecttheinlet.ca/ and Coast Protectors at https://www.coastprotectors.ca/)

Retired speech language pathologist Karl Perrin lives one kilometre up slope from the tank farm in UniverCity, the planned community that borders the campus. When Perrin and his wife Ann moved in, he says, “We didn’t have a clue the tank farm existed.”

Perrin worries that a fire at the tank farm could strand him and his wife, who lives with asthma and could experience life-threatening complications in a smoky environment, on the mountaintop along with more than 30,000 students, faculty, staff and other UniverCity residents. He worries that escape on the only road off the mountain would be blocked by fire and the plume of toxins and smoke it would create. As a 2016 study conducted for Simon Fraser University by PGL Environmental Consultants concludes: “... there is an increased risk to SFU from the (Trans Mountain Expansion Project).”

Roslyn Hart has lived near Burnaby Mountain for 40 years. While her home is a 20-minute walk from the tank farm, she says it is well within the “hazard zone,” a phrase used by several Burnaby Mountain residents concerned about fire among overcrowded fuel tanks and how it could reach into their neighborhood. Living so close to a possible explosion, she wryly notes, “creates a certain unease.”

Like Hart, author, actor and activist Elan Gibson says she lives within the 5.2-kilometre “hazard zone” surrounding the tank farm.

“I live on Capitol Hill,” she says, “and we get all the winds from Burnaby Mountain.” A member of BROKE, Burnaby Residents Opposing Kinder Morgan Expansion, Gibson says she used to love to hike the trails on Burnaby Mountain, but became alarmed when she started having nose bleeds, which she suspects may have been caused by gases leaking from the tank farm. Gibson’s concerns led to her committing civil disobedience at the gates to the tank farm in 2018 (the same series of civil disobedience actions at which I was arrested).

Chris Bowcock, chief of the Burnaby fire department, has weighed in on the project, and his 2015 report is dire.

The report warns that the proposed expansion of the tank farm will make it very difficult for his department to successfully fight any fire that starts within its proposed and crowded new layout of storage tanks. Bowcock says the proposed tank farm expansion would increase the risk of community impacts by 70 per cent.

The Concerned Professional Engineers of BC is worried, too. In a study on the group’s website, Gordon Dunnett writes: “KMC’s (Kinder Morgan, prior owner) structural engineer chose to increase the Burnaby Mountain Tank Farm hazardous material storage capacity while ignoring External Floating Roof Tank failures in seven earthquakes between 1964 and 2011 and five serious fires ignited during these earthquakes."

To global concerns about tank farm safety, add the increased danger that an earthquake could shake the tanks, make the contents slosh, deform the shape of the tanks and make an explosion or boilover event more likely, particularly with the older external floating roof tanks.

John Clague, a retired Simon Fraser University expert on seismic events, says the tank farm represents “an unacceptable risk” given how many fault lines run close to the Lower Mainland.

“The original 1953 tanks are old and were designed to a poor standard. Tanks like those have failed many times,” he said.

According to Daniel Tetrault, president of the Burnaby Teachers’ Association, whose members teach at public schools that are threatened by the tank farm expansion, “The safety of our members, of students and of school staff is threatened by this project. We are not reassured that this tank farm can be operated without unacceptable dangers to all of them.”

Tetrault may be right.

In December of 1982, for example, the Tacoa fire in Venezuela burned for three days, killing more than 150 people. Significantly, the facility was built on a steep slope that made fighting the fire more difficult, just as Chief Bowcock predicts will be the case in a tank farm fire on Burnaby Mountain.

TMX did not respond to questions and concerns raised by the Burnaby fire department and the Concerned Engineers. Instead, the company emailed an old press release that said, in part:

“The location and spacing for the new terminal tanks meet all relevant regulatory requirements and are consistent with environmental best practices of using existing infrastructure to minimize disturbances. The tank locations will result in set-backs greater than those established in Burnaby bylaws.”

So, I guess the worried folks on Burnaby Mountain should just go back to sleep and ignore their nightmares.

With files from Bob Hackett.

By Robert Hackett | Opinion | May 11th 2020
Coronavirus in Canada

That video is brilliant. Let

That video is brilliant. Let's send it to every MP we know ... and to Mr. Trudeau. Send it to his wife and his kids' school. To Mr. Kenney and all our relatives who live in Alberta and think we're all being mean to them.

An updated version of the

An updated version of the video is available here:

In the original, BB says that a vapour-cloud explosion couldn't happen at the Burnaby Mountain tank farm. Turns out that in fact it could (presumably with vapour from the diluent not the bitumen), and a caption has been added where he made that statement.