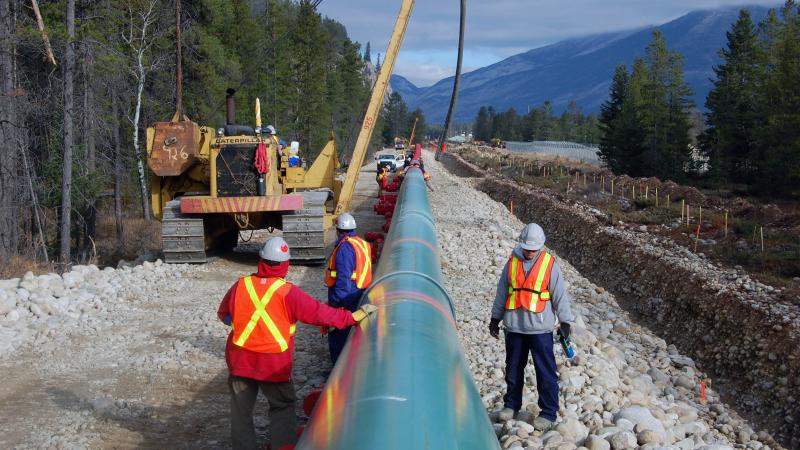 While the pandemic marches on, it's another workday at Burnaby Terminal, the oil storage "tank farm" that is being doubled in density as part of the Trans Mountain pipeline expansion project (TMX). Large vehicles rumble inside the compound and through the electronically controlled perimeter gate. The clatter of heavy machinery resounds through the nearby forest and neighbourhoods. Large signs warn obstructing access to this facility could result in arrest — the fate of hundreds of Indigenous-led land, water and climate protectors in 2018. A smaller sign, next to the guardhouse and gate, says, "Social distancing, where possible, while at (company) sites."

"Where possible." That's a big caveat. Maintaining a two-metre distance in construction sites is often not possible.

While thousands of B.C. businesses have closed, schools and libraries gather dust and millions of British Columbians are urged to stay at home — all for good reason — fossil fuel-related expansion projects continue as if they are "essential services." Both Trans Mountain and LNG Canada (a consortium of foreign corporations) boast they are meeting significant milestones on their respective projects.

TMX would convey toxic diluted bitumen from the Alberta oilsands to the Westridge harbour terminal in Burnaby. LNG Canada's Coastal GasLink (CGL) would bring liquefied "natural" gas from the fracking fields through (as is now notorious) Wet'suwet'en territory to the northern B.C. town of Kitimat.

Significant health concerns have been raised about both projects, as well as BC Hydro's Site C hydroelectric dam in the province’s north. Though publicly touted as "green" energy, it is partly intended to provide subsidized electricity to LNG Canada and carries enormous environmental costs of its own, from methane emissions to flooding of Treaty 8 Indigenous territories and some of Canada's richest farmland.

At the end of March, the Union of British Columbia Indian Chiefs (UBCIC) publicly called for a halt to all construction at the 1,600-worker Site C dam camp "due to the risk COVID-19 now poses to vulnerable workers and nearby Indigenous and non-Indigenous communities in northeast B.C.," followed by a similar call with respect to CGL pipeline construction. The UBCIC added "corporate exceptionalism" should not be a pandemic-response strategy: "The expansion of economic enterprises cannot be considered essential when it directly endangers the health and well-being of every one of us."

Similar appeals were made by city councillors in Fort St. John, the town nearest the Site C camp, and by Dr. David Bowering, former chief medical health officer for the Northern Health region — joined as recently as April 29 by the David Suzuki Foundation.

Henry and other provincial authorities have emphasized the precautions mandated specifically for industrial work sites, such as increased sanitation and physical distancing between employees, and procedures for detecting, isolating and removing workers who do become ill. BC Hydro claims to have reduced its workforce, but hundreds remain and residents and officials in vulnerable communities continue to question the adequacy and enforcement of provincial guidelines. Workers themselves have expressed deep concern for their families' and their own safety.

"The scary thing is that many of the camps are in northern B.C.," says Ben Parfitt, former environmental reporter and now a researcher with the Canadian Centre for Policy Alternatives. "There are few critical beds there. Small, isolated First Nation communities where people live in often crowded housing conditions and lack ready access to health care, can ill-afford to have the virus arrive. Both First Nation and non-First Nation leaders have raised concerns about the Site C workers' camp, where several people have come down with COVID-like symptoms."

"The definition of 'essential service' is symbolically important, and inherently political. It's an important clue as to the vested interests and policy mindset of political and corporate elites."

Validating such concerns, the Interior Health Authority warned of an outbreak at the Kearl Lake oilsands work camp near Fort McMurray, Alta., on April 18. The outbreak has expanded to northern B.C. via workers travelling between the two provinces.

Following a public-health order on April 23, the province is finally sending inspectors to work camps. But there is a legitimate concern about whether park rangers, mining inspectors or other B.C. public-service employees slated for this role are qualified to assess COVID-19-related health-protection procedures.

The risk from fossil fuel "essential services" is not confined to the northern region. Many residents see my hometown, Burnaby, as a fossil fuel sacrifice zone. The TMX project has long raised the spectre of pipeline ruptures, uncontrollable toxic tank-farm fires, salmon-bearing stream contamination, oil-tanker spills and damage to the livability of surrounding neighbourhoods.

To that brew, add the potential for incubating a coronavirus outbreak at Burnaby's two TMX terminals. As Elan Gibson, a spokeswoman for Burnaby Residents Opposing Kinder Morgan Expansion (BROKE), put it, the virus is often not symptomatic among its carriers, and workers at both the tank farm and the Westridge terminal "are going to and from their homes and into our communities each day."

The Indigenous-led group Mountain Protectors, working out of the Watch House built next to the tank farm in 2018, has collected "ample proof" TMX is not respecting the province's or its own "social distance and safety measures," according to Gibson. Photographs in the local newspaper appear to confirm this claim. Encouraged by BROKE, Burnaby Mayor Mike Hurley transmitted these concerns to Trans Mountain and B.C. government authorities.

Are such megaprojects worth adding public-health risks to their indisputable environmental costs?

The B.C. government apparently thinks so. On March 26, Public Safety Minister Mike Farnworth released a list of "essential services," defined as those "essential to preserving life, health, public safety and basic societal functioning … the services British Columbians rely on in their daily lives." While not mentioning specific companies or projects, the list identifies "critical infrastructure service providers," including "oil and natural gas."

The list was developed by Emergency Management BC (EMBC) in consultation with other government ministries and the Provincial Health Officer. In legal and operational terms, the designation apparently doesn't sharply differentiate essential from non-essential businesses, apart from those (like beauty salons and casinos) that have been ordered closed. All are required to adapt to health office guidelines; industrial work camps have a specific set of rules as well as qualified exemptions, for example, from liability for damage due to COVID-19 exposure, and from ceilings on crowd size in one site.

Rather, the list is intended to "encourage" designated businesses to remain open, and to provide a shared framework should further public-health measures be necessary, according to the EMBC's Joint Information Centre.

Nevertheless, the definition of "essential service" is symbolically important, and inherently political. It's an important clue as to the vested interests and policy mindset of political and corporate elites. Treating these three projects as "essential" to B.C.'s future implies a multifold gamble — that global gas and oil prices and demand will escalate sharply from their current historic lows, that the rest of the world will largely abandon efforts to contain greenhouse gas emissions, that taxpayers are willing to continue subsidizing gas and oil producers and lock Canada into exporting fossil fuels for decades, that we are willing to continue destroying farmland just as food-supply chains are becoming demonstrably more fragile and that Canada will continue to play an outsize role in exacerbating climate catastrophes that could make the coronavirus pandemic seem trivial.

None of the megaproject trio currently delivers services to British Columbians. (Trans Mountain did not respond to requests for comment on whether it is an essential service, and on what grounds.) Nor are their prospects of being a future economic engine particularly promising. In the case of TMX, independent analysts like economist Robyn Allan and veteran earth scientist David Hughes have argued compellingly there is no large Asian demand for Alberta's bitumen, TMX will not hugely increase its per-barrel price, relatively few permanent jobs will be created, competing delivery routes will be online soon and there is sufficient export capacity in Canada's existing pipelines.

Rather than fuelling economic growth, TMX could burden Canadians with $9 billion or more in rising construction and insurance costs — costs that have recently shifted Canadian public opinion against the project, according to recent polls.

Similar claims could be made about the dubious economic benefits and definite environmental costs of CGL, compounded by tax subsidies to a foreign consortium (LNG Canada) and the blatant violation of Indigenous rights and traditional territories.

The stakes are high enough to warrant critical attention from the province's news media — the institution that should be informing citizens about policies and events that affect them, acting as a watchdog on power and scanning the scene for threats to individual and community well-being. These are aspects of what media scholars Clifford Christians and his colleagues describe as the "monitorial" function of the press.

They identify three other ideal functions of the press in a democracy: facilitating a forum for public conversation, identifying and even advocating for necessary social change and collaborating with government and other institutions to support broadly acceptable social purposes.

Though under-recognized in conventional western journalism theory, that collaborative role is often practised by supporting charity campaigns or governments in times of emergency, like war — or pandemics. I tracked most daily news briefings with Henry and Health Minister Adrian Dix from March 30 until April 30. Journalists raised numerous pressing questions about the trajectory of the disease, the situation of vulnerable groups like the homeless and elderly, strategies for response and much else. They can take much credit for how well British Columbians generally responded to public-health advice.

But while five out of 224 questions I've recorded concern risks from the industrial work camps, nobody queried Henry's repeated references to construction projects and workers as "essential." Perhaps journalists are reluctant to push their monitorial role in a climate of emergency, and vis-a-vis a personable official whose calm professionalism and empathy has made her a folk hero in B.C. The demands of a fast-moving story and the distance of most work camps from B.C.'s southwestern metropolitan media may be factors.

But there's also evidence corporate news media implicitly accept the ideological premises underlying fossil fuel-oriented energy megaprojects. One recent example: an April 4 column by Vancouver Sun veteran Vaughn Palmer, concerning the pleas from northern B.C. to suspend Site C construction. Palmer devoted just three paragraphs to outlining those calls, and 18 to rebuttals by Premier Horgan, Dr. Henry and BC Hydro. Knowing the additional price tag of "another year's delay" in the massive river diversion associated with Site C, he concluded, would give the public "a more rounded picture of the stakes."

Corporate media pundits less often include the costs of business as usual as part of a "more rounded picture." Jay Ritchlin, a David Suzuki Foundation spokesman, suggests subsidies to the fossil fuel megaprojects could be used instead for transitioning to a new type of economy. The COVID-19 catastrophe requires us to reconsider what really is essential.