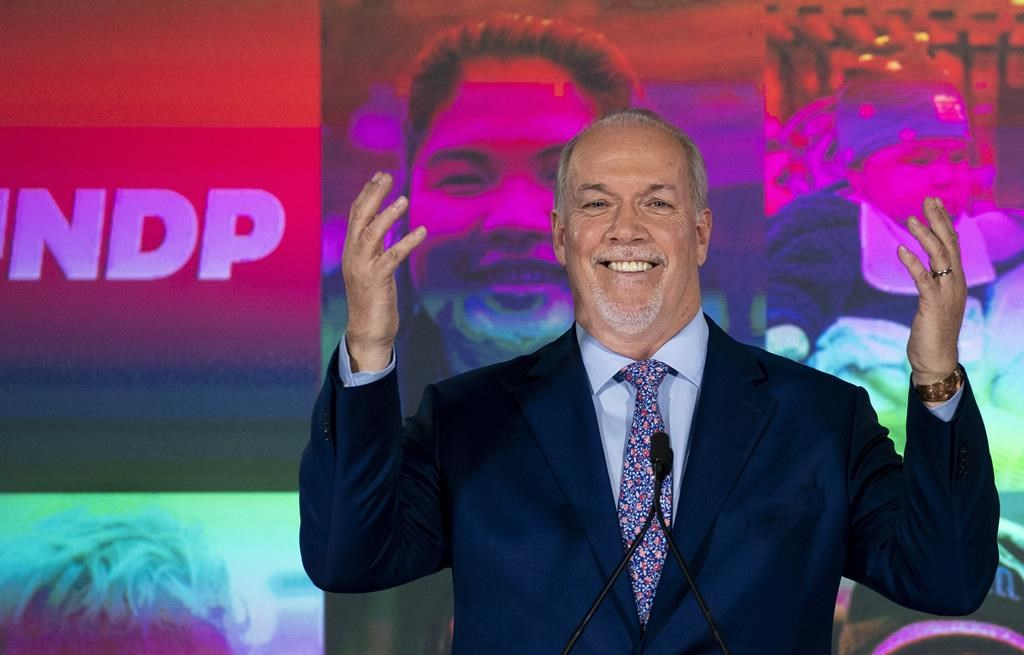 The New Democrats won a majority government in the British Columbia election on Saturday as voters rewarded John Horgan with a second term after he took a gamble on calling an election during the COVID-19 pandemic.

With more than 80 per cent of the polls reporting results, the NDP had won enough seats to form a majority government. The final count won't be available for three weeks due to the record number of ballots cast by mail, which have not been counted.

The New Democrats won 53 seats, the Liberals 27 seats and the Greens three. Four ridings were too close to call.

It has been an honour and a privilege for the past three and a half years to serve British Columbians, to make sure we can make life better for everyone. (1/7) #bcpoli #BCelxn2020 #BCElection2020 pic.twitter.com/Ili6DU9XFb

Horgan said the NDP would continue to steer the province through the pandemic while waiting for the final results from Elections BC.

“B.C. has voted and a majority has been called but there are many, many hundreds of thousands of votes yet to be counted," Horgan said.

"And while we wait for that final count to happen I want to assure people that I’m going to keep the focus right where it belongs – on helping people get through this pandemic, making sure that they have the services that they need.”

The NDP also had a firm grip on the popular vote throughout Saturday night, holding about 45 per cent to the Liberals 36 per cent and the Greens at 15.

Despite the gap, Liberal Leader Andrew Wilkinson did not concede defeat Saturday night.

"As the results stand tonight, the NDP are clearly ahead and appear to have the opportunity to form government," he said.

The New Democrats won a majority government in the British Columbia election on Saturday, October 24, 2020, as voters rewarded John Horgan with a second term after he took a gamble on calling an election during the COVID-19 pandemic.

"But with almost half a million ballots still to be counted, we don’t know what the final seat count will be. And we owe it to every vote — every voter — no matter how they expressed their intention, to await the final results.”

The snap election was historic on several counts. It was coloured by the pandemic, ended with Horgan becoming the first two-term NDP premier in B.C. history, and saw the Greens expand to the Lower Mainland for the first time.

The Liberals lost in key battleground districts in Metro Vancouver and some of their own strongholds.

Green Leader Sonia Furstenau said her party's expanded caucus will make itself heard in the legislature.

"We will do everything we can to hold them accountable," she said. "The NDP have shown while they will say the right thing they won't act on it unless they are forced."

Voters elected former MP Nathan Cullen despite the criticism he drew for mocking the nickname of an Indigenous candidate in a neighbouring riding. Former New Democrat MPs Fin Donnelly and Murray Rankin also won their seats for the NDP.

Liberal incumbents Mike de Jong, Ian Paton, Shirley Bond and Todd Stone were among those re-elected. However, voters dealt blows to several prominent Liberals including Jas Johal and Mary Polak. Jane Thornthwaite, who came under fire for making sexist comments about an NDP member of the legislature, also lost her seat.

Green incumbent Adam Olsen was re-elected and Jeremy Valeriote picked up the party's first seat outside Vancouver Island in West Vancouver-Sea to Sky, a riding previously held by the Liberals.

The seat of incumbent Laurie Throness in Chilliwack-Kent still hangs in the balance, as he jockeyed for the lead with his NDP challenger. Throness was officially listed as a Liberal on the ballot but he resigned from the party midway through the campaign to become an Independent after coming under fire for likening free birth control to eugenics.

Horgan dissolved his minority government a year before the province's fixed voting date and his decision to call a snap election emerged as a key issue in the middle of the COVID-19 pandemic.

Mail-in-ballot requests surged during the pandemic, with the latest figures from Elections BC showing more than 720,000 were sent out and nearly 498,000 returned.

Elections BC says it hopes to deliver the final results by Nov. 16, but the date isn't firm as it's unclear how much time will be needed to count the mail-in ballots.

Horgan was branded a political opportunist by Wilkinson and Furstenau for risking an election during the pandemic when they said people needed stability.

But Horgan said he called the election to give the province a chance at the certainty of a majority government in uncertain times.

At dissolution, the NDP and Liberals were tied with 41 seats in the legislature, while the Greens held two seats, there were two Independents and one seat was vacant.

The campaign featured promises for more affordable daycare and improvements to long-term care, as well as different ideas on ways to spur the economy after the pandemic subsides.

The NDP platform was largely built on the party's record and promises to continue what it started, including expanding $10-a-day child care and implementing a rent freeze until the end of next year. There was also a promise to provide a $1,000 recovery benefit for families with annual household incomes under $125,000.

The Liberals wanted to cancel the provincial sales tax for one year at a cost of $7 billion and eliminate the small business income tax to help with the economic recovery from COVID-19.

Furstenau argued for another minority government, telling voters not to give all the power to one party. She campaigned on the influence the Greens have had on policy, particularly on the government's transition to renewable energy in its Clean BC plan.

Horgan acknowledged that the campaign was unlike any other on Saturday.

“This has been an extraordinarily difficult election for many, many reasons, but it’s one that I believe had to happen,” said Horgan.

“I’m grateful for all British Columbians that we have put the election behind us and we can get back to focusing on the things that matter most to you.”

The last Mainstreet pre-election poll specifically among those who already voted (including advance in-person voting, I think?) was 55% NDP, 28% Liberal, and 16% Green.