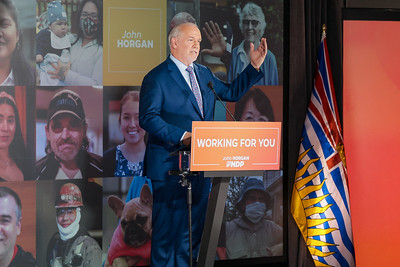 With close to a third of ballots still waiting to be counted, it’s hard to fully analyze B.C.’s 2020 election just yet. But there’s enough information in the 1.2 million votes that have been counted to be grateful for a few things.

Contrasting our election to the U.S. election campaign this past month, British Columbians live in a remarkably civil society. This is worth fighting for and defending against efforts to degrade it 100 per cent of the time. In this election, British Columbians did just that.

Misogyny, transphobia and homophobia were given a strong rebuke in ridings where this was the voting issue. This included North Vancouver-Seymour, where three-term MLA and former North Vancouver school trustee Jane Thornthwaite lost by a wide margin to a first-time NDP challenger, registered nurse Susie Chant.

There is probably no one in British Columbia who doesn’t know that Thornthwaite was recorded in a BC Liberal online roast for former North Shore MLA Ralph Sultan using degrading language to describe fellow NDP MLA Bowinn Ma. Before losing the seat by a wide margin Saturday night, North Vancouver-Seymour had voted solidly centre right since before you could buy a fax machine. In case you’re wondering, Ma was re-elected and had one of the largest NDP riding gains in the province.

Another battleground where civil society was on the ballot was Chilliwack-Kent, which, prior to the election, was held by MLA Laurie Throness, who subscribes to transphobic and homophobic views such as a belief in conversion therapy. On election night, ballots counted showed him losing by a slim margin. It may yet flip on mail-in ballots, but Throness was an incumbent with 53 per cent in the last election and the riding has never before gone NDP. It shouldn’t even be close.

Poor-bashing and stigmatizing were also shown the door by voters in several urban battlegrounds. High-profile candidates like former Vancouver mayor Sam Sullivan and former two-term Vancouver councillor George Affleck — both from the Non-Partisan Association, a right-wing civic party — relentlessly attacked the poor and drug users. Their election results were well below expectations. Hopefully, this puts an end to the tactic by both these serial politicians and others who might have thought grandstanding on misfortune helps at the ballot box.

This was also the first election in B.C.’s modern history that was contested without corporate or union donations and with strict limits on individual donations. Spending caps were also lower. Campaign finance reform is the kind of policy that is successful precisely because you don’t notice it. It can’t make a society more civil, but good campaign finance policy can ensure that elections are fairer and thus better reflect our aspirations, which is a great way to maintain a civil society.

While we wait for the mail-in and absentee ballots to be counted, a word to the new NDP majority government from my own experience in a three-term government: winning a strong majority can be the worst thing to happen to a party. This is especially true in two circumstances, both of which exist in this case.

First, though, let me be clear that the NDP candidates and campaign teams worked very hard to secure the votes they received, and they deserve credit for that work. At the same time, there is no question that their main opponent — the BC Liberals — ran a terrible campaign. It reminded me a lot of the epically bad NPA loss in the 2011 civic election when the opposing Vision Vancouver party swept every seat it contested. It is always a mistake to view this kind of crushing win as an untempered mandate to govern.

The other problem lies in assuming that voters support all your policies. I co-chaired Environment Minister George Heyman’s re-election bid, and I am also a staunch opponent of the NDP’s policies on LNG and Site C and a critic of their lack of significant action on drug and education policy reform. I don’t see a contradiction in my support but, rather, logic that if I support the majority of their policies and also want to change their minds on the ones I don’t support, I’m better off doing it on the team than shouting from the sidelines, at least for now. And that’s the rub.

A government should never assume the votes sent its way imply full endorsement of its platform. You should always govern as though you are on a knife’s edge. Premier John Horgan has made encouraging comments in this regard since Saturday night’s big win. If his caucus members follow his lead and demonstrate that ethos in their work over the next four years, most British Columbians won’t regret their vote this past month.

I know what this author means

I know what this author means by the "poor-bashing" conducted by several BC Liberal candidates, but it's hard to think up a different word for what the NDP did when they --

What is this if not poor-bashing -- just beating the fucking hell out of tenants?

You know what would have

You know what would have REALLY been a win for civil society? If the GreeNDP had implemented proportional representation. No more going to the polls early so that some power-greedy premier can grab himself a false majority.

To anyone assuming the Green

To anyone assuming the Green Party would have promoted public service and what's necessary, perhaps we'll have to see what they say in opposition to an NDP majority.

This is a first for Canada, possibly even for North America and its social democratic sibling parties.

Before anyone replies, obviously this isn't the first NDP majority, but it is the first with Greens among the other MLAs.

FPTP is still crap, NDP get

Agree with other commenters

Agree with other commenters that this would have been a true triumph, not just a relative one, if there had been proportional representation in effect in this election, instead of FPTP. Like the author, I support many of the NDP's initiatives and goals, but I think some of the best achievements have come because of the collaborative agreement with the Greens in the last term. It was the Greens who insisted on an end to big money donations from corporate and union interests, as a condition of supporting the NDP. This was absolutely vital, to remove unfair influence as much as is possible. I decry the decisions the NDP have made on Site C and LNG, which are a backhand to the hopes of all our children for a survivable future, and a renewable energy transition. Here again, the Greens had it right, and the NDP would have been wise to listen.

The NDP stated that they support proportional representation. They know that the referendum on this was flawed by misinformation and poor communication. They know that, when there was a much better effort at seeking citizen input and engagement on the issue, with a citizens' panel, that 58% of voters voted for PR, but were frustrated by the Liberals setting the bar for approval at 60%. They have just secured a strong mandate, as a party formerly on the record as supporting electoral reform and PR. If they now used their strong position to bring in PR on a 3 year pilot, with a vote after the fact to keep, modify, or switch back to FPTP, instead of asking people to vote for something they have no experience with, it would be entirely reasonable and rational, and would demonstrate that they are not just all about grabbing dictatorial power. The author correctly points out that there is a longer-term danger to having won this majority situation. In the longer run, Horgan would have nothing to fear if he brought in PR for the next election, as it would demonstrate moral courage, integrity, and prioritization of the public interest, over the personal and partisan interest.

If John Horgan is actually a courageous leader, he will let BC take the lead in Canada on electoral reform, and this time, bring it in in a way that can't be stymied by the private interests that have for so long pulled all the strings behind the curtains. Wouldn't it be awesome to see BC finally move toward PR, just as Premier Ford in Ontario is once again interfering in municipal elections, by bringing forward a plan to prevent municipalities in Ontario from bringing in PR? We can all see who's been pulling his strings, and what an empty slogan has been his claim that he is "for the people". He is clearly, "for the monied interests", as ever. Mr Horgan, show us you're better than that.

John Horgan has broken every

John Horgan has broken every major environmental promise he made in the last campaign: sustainable forestry (he's logged over a million acres of old growth since coming to power), no endangered species act (because that would involve a stop to old growth logging), Site C (his disingenuous commitment to a review implied he would listen to the science which said plainly that Site C would be a disaster), and his stance on LNG (talking climate change when his 2050 greenhouse gas emission goals will be blown by 160% with just one LNG project). Social justice on an international level means cutting our greenhouse gases drastically, as millions of people in poorer countries are becoming desperate refugees due to climate change caused by irresponsible policies like Horgan's LNG expansion and old growth logging (old growth holds vast carbon stores, released by logging). Being inside the tent means endorsing his disastrous environmental record. So what are you going to do to stop the logging of the last remnants of our iconic and rare old growth, and what are you going to do to stop B.C.'s climbing greenhouse gas emissions and what are you going to do about our almost 2000 species at risk in B.C.?