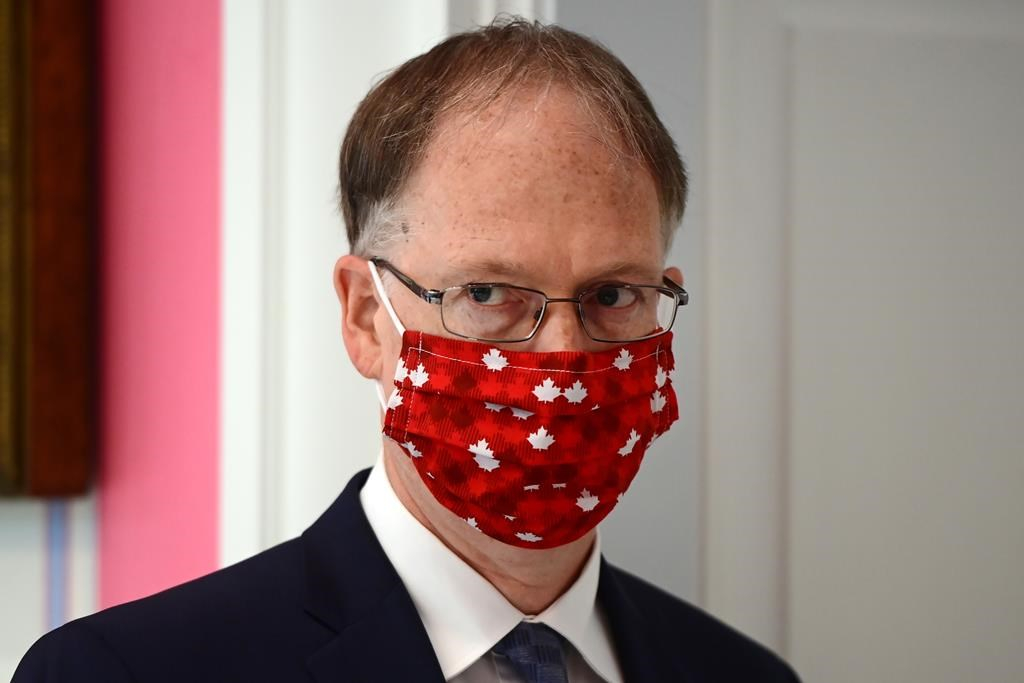 Clerk of the Privy Council Ian Shugart attends a swearing in ceremony at Rideau Hall in Ottawa on Tuesday, August 18, 2020. File photo by The Canadian Press/Sean Kilpatrick
Previous story

The country's top public servant is offering to testify about controversial redactions to some 5,000 pages of documents the government released on the WE Charity affair.

Ian Shugart, clerk of the Privy Council, made the offer Tuesday in a letter to the House of Commons finance committee.

The committee has been stalled for several weeks over a Conservative motion denouncing the redactions as a breach of committee members' privileges as MPs.

Liberal members of the committee have been filibustering the motion, arguing that public servants should be given a chance to explain why they blacked out portions of the documents before they're officially rebuked for doing so.

In his letter, Shugart says he and his colleagues would be pleased to appear at the committee to explain their decisions.

The committee had demanded that the documents be turned over without redactions and that it be left to the parliamentary law clerk, Philippe Dufresne, to decide whether anything needed to be blacked out to maintain personal privacy or cabinet confidences.

Nevertheless, when the documents were turned over to the committee in August, large chunks had already been blacked out.

In letters to the committee at the time, Shugart and other senior public servants explained the redactions were to maintain personal privacy and cabinet confidences and to delete portions of records that had nothing to do with the WE Charity affair. Indeed, Shugart argued that the unredacted records included cabinet confidences that would normally have been blacked out.

However, Dufresne told the committee that it was not up to the public servants to decide what to redact.

“The House and its committees are the appropriate authority to determine whether any reasons for withholding the documents should be accepted or not,” he wrote in a letter to the committee.

“One such measure is the committee’s decision to have my office make the necessary redactions to protect personal information and the public servants providing assistance in this matter.”

The country's top public servant is offering to testify about controversial redactions to some 5,000 pages of documents the government released on the WE Charity affair.

Shugart's offer to testify could potentially break the impasse that has paralyzed the finance committee for weeks now as Liberals filibuster opposition attempts to reopen investigations into the WE Charity affair.

The Commons ethics committee has also been stalled over the WE affair, which revolves around the government's decision to pay the charity $45.3 million to administer a student services grant program, despite Prime Minister Justin Trudeau's close family ties to the organization.

The ethics committee had been stuck for weeks on a Conservative motion calling for the release of all speaking fees paid to Trudeau, his wife, mother and brother over the past 12 years. That motion was scaled back Monday to apply only to the prime minister and his wife, Sophie Grégoire Trudeau, on the initiative of NDP member Charlie Angus.

Even so, a Bloc Québécois MP, who was filling in at the last minute for a colleague on the committee, accidentally voted with the Liberal members to defeat the amended motion. The Bloc blamed a translation problem for the foul-up.

A Bloc spokesman said Tuesday that the party is in discussion with the Commons clerk about the possibility of redoing the vote. If that is not possible, Julien Coulombe-Bonnafous said the party will try to introduce a similar — but not identical — motion on speaking fees next week.

"Considering that this is a mistake and there has been a technical problem, we are confident that all parties will work together," he said.

Angus is also hoping to reintroduce a similar motion.

Procedural rules generally prohibit a committee from voting a second time on the same matter so any new motion would have to be sufficiently different from the original and amended versions of the Conservative motion to pass muster.

What is needed is an inquiry

What is needed is an inquiry into these charities in general and WE in particular, something is rotten. Also, access to students seems to be open to any cult, this must change