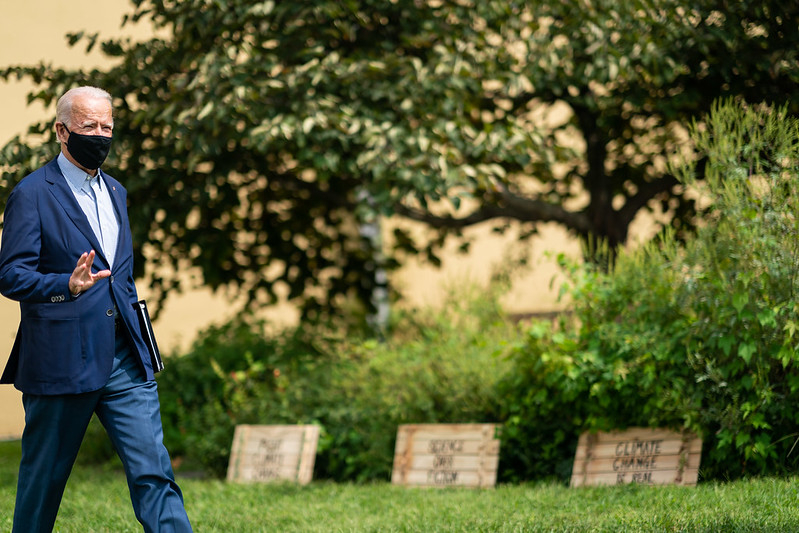 Remarks on the climate crisis in Wilmington, Del., on Sept. 14, 2020. Photo by Adam Schultz / Biden for President (CC BY-NC-SA 2.0)
Previous story
Next story

After five days of nail-biting, anxiety-inducing ballot counting in half a dozen key swing states, Joe Biden has been declared the winner of the 2020 presidential election. And while Biden’s victory will put an end to the notoriously anti-environment Trump era, it also comes with one burning question: Will the former vice-president — who made climate change a centrepiece of his campaign — be able to push the country onto a safer, and cooler, path?

“A Biden win is a first step to a better future,” said Ken Caldeira, a climate scientist at the Carnegie Institution, via email. “But we have a long road ahead of us.”

The stakes have never been higher. The United States is responsible for approximately 15 per cent of the carbon dioxide spewing into the atmosphere from the burning of fossil fuels. Without dramatic action to slash those emissions in the coming years, the globe is expected to face dangerous levels of warming, combined with heat waves, runaway floods and catastrophic wildfires. Scientists have recently been warned that another four more years of Trump could have terrible consequences: Michael Mann, an eminent climate scientist, portrayed it as “game over” for the climate.

That’s part of why Biden entered the general election with the most ambitious climate plan of any major presidential candidate — ever. The former vice-president promised to spend $2 trillion on clean energy, create a new civilian “climate conservation corps,” and completely eliminate emissions from the electricity sector by 2035. In a debate with Trump, he promised to “transition away from the oil industry,” a remark previously considered unthinkable for a presidential candidate. Climate activist groups, like the youth-led Sunrise movement, initially scorned his plans — then joined him on the campaign trail.

Those big plans seem to have energized voters. According to one NPR poll in September, a record 12 per cent of voters (and 22 per cent of Democrats) identified climate change as their number 1 issue in the presidential race — even in the midst of the COVID-19 crisis. Early analysis from the nonprofit Environmental Voter Project showed that more than 500,000 “environment-first” voters cast their ballots in 2020 for the first time. Even on the morning of election day, some groups were already calling it “the first climate election.”

Now comes the hard part. The House of Representatives remains firmly in Democratic hands. But Democrats lost crucial Senate races in Maine, Montana and Iowa, likely leaving Biden with a divided Congress. With a Republican-controlled Senate, the new president will have to fight to get any legislation through — let alone a proposal to overhaul the country’s energy policy. And attempts to regulate carbon emissions through executive action could be foiled by the new, highly conservative Supreme Court.

That means Biden will probably focus first on undoing the damage of the Trump era. (Trump has repeatedly called human-induced warming a Chinese “hoax,” and suggested that supporters of the Green New Deal were going to “take out” America’s cows.) In 2017, Trump vowed to pull the U.S. out of the landmark Paris Agreement, a move that, due to a combination of complex rules and random chance, was officially completed this week; Biden has said he will rejoin the agreement immediately after his inauguration in January. Trump dismantled at least 70 Obama-era environmental rules intended to keep fossil fuels in the ground and dangerous toxins out of American air and water; Biden has pledged to reverse as many of those actions as he can.

Other climate-friendly initiatives — funding for renewable energy, or for building more efficient homes — will have to be wedged into spending bills, or otherwise snuck into legislation that could get through a Republican-led Senate. Biden might have an advantage in this, however: With 36 years in the Senate, he has more congressional experience than any other president.

“A Biden win is a first step to a better future. But we have a long road ahead of us,” said Ken Caldeira, a climate scientist at the Carnegie Institution. #climatechange

To be sure, the results of the election weren’t exactly what activists and advocates were hoping for. The next four years are more likely to feature incremental action than the sweeping dreams of the Green New Deal, and — much as in the Trump era — progress may be led by left-leaning states and big corporations willing to cut carbon.

At the same time, the problem of climate change is becoming too big to ignore. In the past few months alone, there have been so many hurricanes that meteorologists started naming them after Greek letters. In September and October, fires over California, Oregon and Colorado turned the skies a sickly, Blade Runner orange. As even ordinary Americans become tuned in to the issue, a victory for a presidential candidate who recognizes the scale of the problem looks like a necessary first step — that will still leave many wanting more.

“What we do in the next years and decades will affect the Earth for tens of thousands of years, if not longer,” said Caldeira, the climate scientist. Biden, he added, “needs to show us that there is a reason for hope.”

By Emily Holden | News, US News | November 4th 2020
Reports from the Race to a Safer World