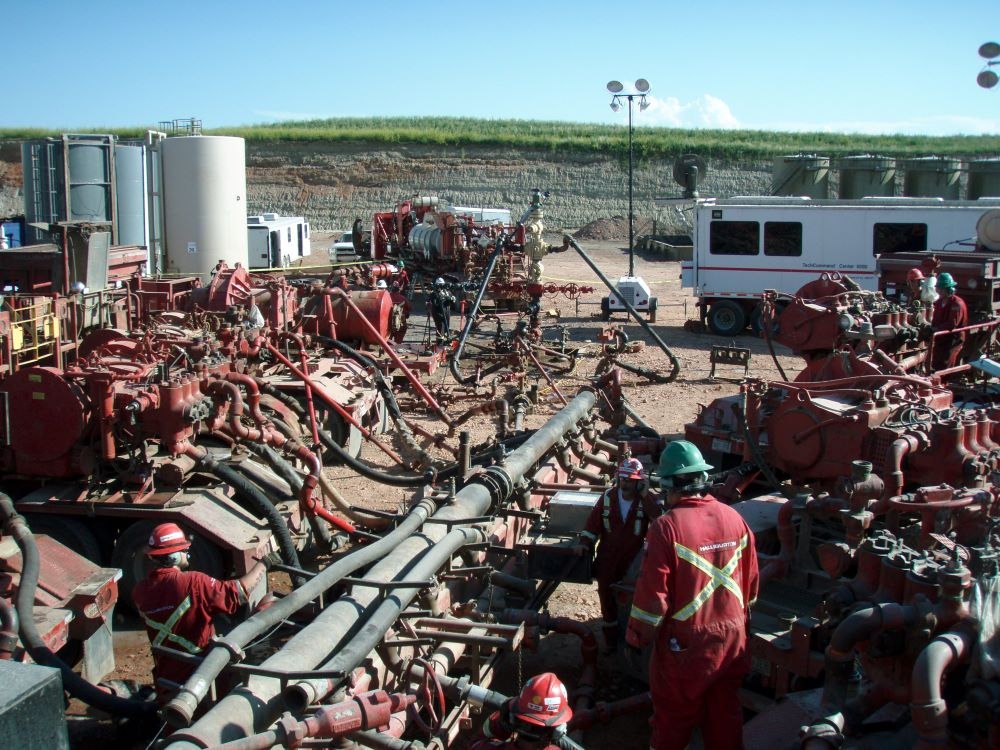 An example of a fracking operation at the Bakken Formation in North Dakota. Photo by Joshua Doubek
Previous story
Next story

In the media of English-speaking Canada, one sees the arguments, pro and con, for building pipelines to export the fossil fuels of Alberta, Saskatchewan and even northern B.C. You may read that the Wet'suwet'en, First Nation “Coast Defenders” and environmentalists are opposed to the Trans Mountain pipeline and to Coastal GasLink.

But did you know that another major natural gas project is being promoted in Quebec right now? Just as in Hugh MacLennan's novel Two Solitudes, only a tiny minority of citizens are aware of the battles and the problems in the “other solitude.”

In a nutshell, this project — a joint multibillion-dollar venture between Gazoduq and GNL Quebec — would entail natural gas, extracted from fracking in northern B.C. and Alberta, being piped through existing pipelines all the way to eastern Ontario.

From there, a 750-kilometre pipeline — the Gazoduq project — would be built to the shores of the Saguenay River, where a liquefaction plant — the proposed Énergie Saguenay Project — would cool the natural gas to -162 C and then ship it in LNG tankers to Europe and Asia.

Currently, BAPE (Quebec's environmental agency) is holding hearings on the liquefaction plant only. Because of conflicting jurisdictions, the interprovincial pipeline part of the project, plus the shipping on seaways, are under federal jurisdiction. This means hearings have already been held under the scrutiny of its federal counterpart, the Assessment Agency of Canada.

Last November, our local environmental committee in the Saint-Hyacinthe area expressed its opinion on the pipeline part of the project. Despite the fact that the project leaders from Gazoduq and GNL Quebec are trying to play one government against the other, this is ONE single project; pollution, GHG (greenhouse gases) and climate change know no boundaries!

For example, project proponents want us to believe that the liquefaction plant (the one under the scrutiny of BAPE) would be carbon neutral after the construction phase; in order to achieve this, it would use millions of kilowatts an hour of Quebec’s hydroelectric power. Many people have pointed out that our clean hydropower should be used to promote innovative carbon-free technologies, not to do some greenwashing of a fossil fuel that many serious researchers claim is as dirty as coal. In order to be carbon neutral in Quebec, we are asked to ignore the GHG produced from fracking in Alberta, leaks in pipelines, the clean hydroelectric energy required for transportation, the clean energy required to liquefy the gas and combustion in foreign countries.

Here, the opposition to the Gazoduq project is strong. In September 2019, half a million people marched through the streets of Montreal to denounce climate change, fossil fuels and Gazoduq. To date, BAPE has received an unprecedented 3,000 briefs on this subject; the vast majority of these expressed either outright opposition or asked pointed questions about the so-called environmental benefits of the project.

On top of the environmental problems, many have questioned its economic viability. The prices for petroleum and gas are at an all-time low. Forty economists have expressed doubts about the project, unless it were to be heavily subsidized by governments. We would object strenuously if the government of Quebec should buy an economically lame-duck pipeline just like the federal government's purchase of the Trans Mountain pipeline. And to cap it all, investor Warren Buffett (Berkshire Hathaway) has decided to withdraw his US$3-billion investment in this project.

Slicing this mega-project into numerous tiny, isolated pieces doesn't make it more environmentally friendly. We see through this public relations baloney. The solution to climate change must be global in scope. The message from the Intergovernmental Panel on Climate Change is clear: If we want our planet to remain habitable for our grandchildren, 80 per cent of fossil fuels must remain in the ground.

"We must use the reset potential of the COVID-19 pandemic to find novel ways to put our economy back on its wheels," Gérard Montpetit writes. #Quebec #fracking #climatechange

No matter which side of the “two solitudes” you are from, the fight against fossil fuels, such as “Projet Gazoduq” is similar to the fight against Trans Mountain or Coastal GasLink or Keystone XL. In all cases, the purpose of these pipelines is to bring more fossil fuels to the marketplace, which means that all are in direct contradiction of our commitments to the Paris Accord.

We must use the reset potential of the COVID-19 pandemic to find novel ways to put our economy back on its wheels. And that means helping the workers from the oilpatch find new jobs in renewable energies. In this, all people on both sides of the “Two Solitudes” must be united for the common good!

There is also the adverse

There is also the adverse impact of increased marine traffic on the endangered St-Lawrence Estuary beluga whales to consider.