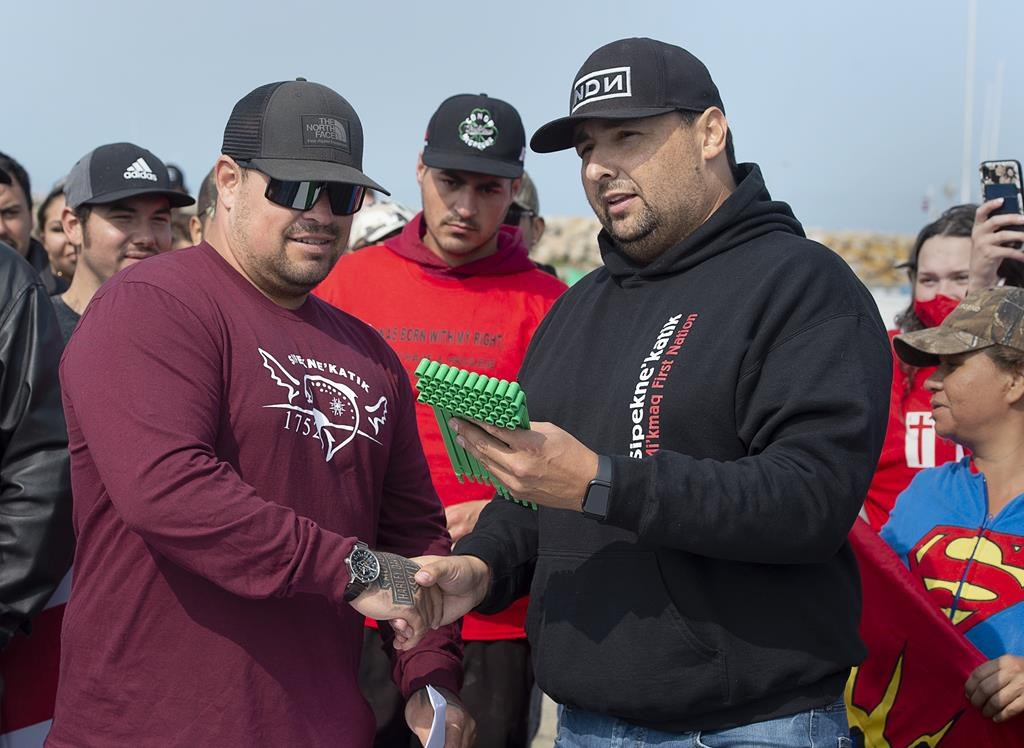 Mike Sack presents the first lobster license and trap tags to Randy Sack on the wharf in Saulnierville, N.S., as they launch their own self-regulated fishery on Thursday, Sept. 17, 2020. File photo by The Canadian Press/Andrew Vaughan
Previous story
Next story

A Mi'kmaq First Nation that encountered violence after it opened a self-regulated lobster fishery says it will launch a series of lawsuits against non-Indigenous fishers for alleged damages incurred by its members.

The band also intends to file a constitutional challenge against a provincial law that has prevented the band from selling its lobster catch, Ron Pink, the lawyer for Sipekne’katik First Nation, said Thursday.

"We're pursuing injuries to individuals and disruption to their fishing by certain individuals," Pink told a news conference at the band office. "We'll have lawsuits against all those who interfere with our fishery."

The lawsuits, he said, will also target fish buyers and other businesses that refused to deal with the Mi'kmaq community after it launched its lobster fishery in St. Marys Bay from a wharf in Saulnierville, N.S.

Pink said the band plans to launch multiple complaints before the RCMP's civilian review commission regarding the federal police force's response to violence against band members. "We are not going to allow this discrimination and bullying tactics by the federal government and their agencies against us," Pink said. "We're not going to put up with it any more."

The lawsuits result from months of tension surrounding the band's decision to launch a self-regulated lobster fishery in September outside the federally run fishing season. Pink and Indigenous fishers say a 1999 Supreme Court of Canada decision affirmed the Mi'kmaq treaty right to fish for a "moderate livelihood" when and where they want.

That decision was later clarified by the court, whose members said the federal government could regulate the Mi'kmaq treaty right for conservation and other limited purposes. Non-Indigenous fishers say the self-regulated fishery violates the Supreme Court decision and should be closed.

Ruth Inniss, adviser with the Maritime Fishermen's Union, says Pink's allegations and threats are unhelpful at a time when her group and others are trying to cool tensions and to negotiate with Mi'kmaq fishers.

"We need to come together and find solutions to this together," she said. "These allegations aren't helpful. Dialogue is helpful. There have been altercations on both sides."

Sipekne’katik Chief Mike Sack, however, says he believes the lawsuits will help protect his members from the intimidation tactics they've had to endure over the past two months. Those include the destruction of a lobster pound and the burning of a Sipekne’katik band member's van.

A #Mi'kmaq First Nation says it will launch a series of lawsuits against non-Indigenous fishers for alleged damages incurred by its members during a lobster dispute. #cdnpoli #NovaScotia #mikmaqrights #lobsterdispute

Sack said the band will sue captains of commercial fishing boats for assault, battery and harassment. "They're going to be held accountable here, one way or another," the chief said.

Court action is already working, he said, referring to a Nova Scotia Supreme Court order prohibiting anyone from "threatening, coercing, harassing or intimidating'' band members or people doing business with them. "The injunction is working very well," Sack said Thursday. "It's keeping a lot of people away (from the Indigenous fishers)."

Pink said the first lawsuits will be filed in December. The constitutional challenge against the province, he said, will be a separate action that will target Nova Scotia's system for granting fish-buying licences.

Premier Stephen McNeil has argued that the federal government must first define a "moderate livelihood" fishery before the province can allow buyers to legally purchase lobster from one.

Sack's band will not participate in the federally regulated fishing season that begins in late November, citing safety issues. But the band, he said, intends to keep the boats that are part of its self-regulated fishery at the wharf in Saulnierville.