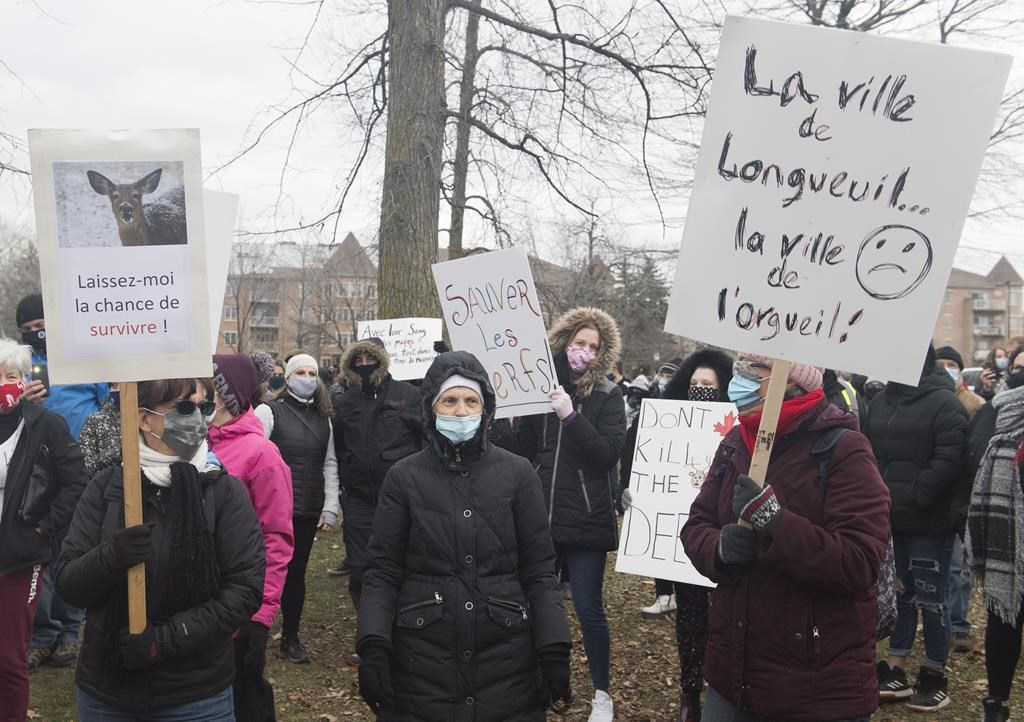 People take part in a demonstration to protest the culling of a number of white-tailed deer in Michel-Chartrand park in Longueuil, Que., on Saturday, November 14, 2020. Photo by The Canadian Press/Graham Hughe
Previous story
Next story

Protesters gathered in a city south of Montreal on Saturday to urge their elected officials to reconsider a plan to cull half the deer in a local park in a bid to control overpopulation.

About 100 people, some wearing deer antler headbands, waved handmade signs as they made their case for officials to spare the beloved animals that are a common sight along the wooded trails of Longueuil's Michel-Chartrand park.

Many in the crowd urged Longueuil city officials to take up a zoo on its offer to give the animals a new home instead of killing them and donating the meat to a food bank.

Local resident Koleighna Wilbur said the deer are beloved by those in the area, and seeing them provides a much-needed bright spot during a tough year marked by the COVID-19 pandemic.

"You walk in the beautiful trails here, they come right up out of the woods, they’re not afraid of you, they don’t do any harm, and they bring everyone so much happiness," she said.

"We had nothing to do all summer, this was our saving grace."

City officials said there are roughly twice as many deer living in Michel-Chartrand Park as there should be, and the 30 or so animals are threatening the area's biodiversity and increasing the risk of accidents.

But their plan to capture and euthanize half the herd has been met with opposition, including a petition with more than 32,000 signatures and at least one threat against the city's mayor that is being investigated by police.

That anger has been further galvanized in the last few days after an animal rescue company and a zoo came forward to offer to trap, sedate, and transport the animals to a new home.

The city has warned the stress of moving the animals could kill some of them. They also warn that moving them could displace the problem elsewhere, or even introduce diseases to a new area.

But many in the crowd believe the risk of moving the animals is better than giving them no chance at all.

Protesters gathered in a city south of Montreal on Nov. 14, 2020, to urge their elected officials to reconsider a plan to cull half the deer in a local park in a bid to control overpopulation. #deer #cull #Quebecpoli #Longueuil #MichelChartrandPark

Eric Dussault, the head of the animal rescue company that has offered to move the animals, believes it can be done safely.

He said the cases of deer dying from stress involve wild animals moving to an unsecured location. These animals, he said, are already used to humans and will be heavily sedated during transport and taken to a controlled area where they'll be cared for and kept apart from other animals to be sure no illnesses are passed on.

He believes the city has a responsibility to save the deer, especially since it contributed to the growth of the herd by feeding them in previous winters.

"To say we're going to kill deer in the middle of the city who are used to humans, and it’s us who created the problem, I think it’s our responsibility somewhere to give them a better life, to take them somewhere they can be safe," he said.

The City of Longueuil acknowledged that it fed the deer in past winters in the hopes of stopping them from wandering onto roads and getting killed. It reduced the feeding in 2015 and stopped it in 2017 as knowledge of best practices evolved, the city said in an email.

As of Friday, the city indicated that it planned to continue with its plan to euthanize, rather than move, the animals.

This report by The Canadian Press was first published Nov. 14, 2020

Amazing how some people care

Amazing how some people care more about wild, out of control. not endangered animals (deer, raccoons, gulls) than children, refugees, and other people in need. On the other hand, why would the city not take up the offer to move the deer, at no cost to the city? All a tempest in a teapot?