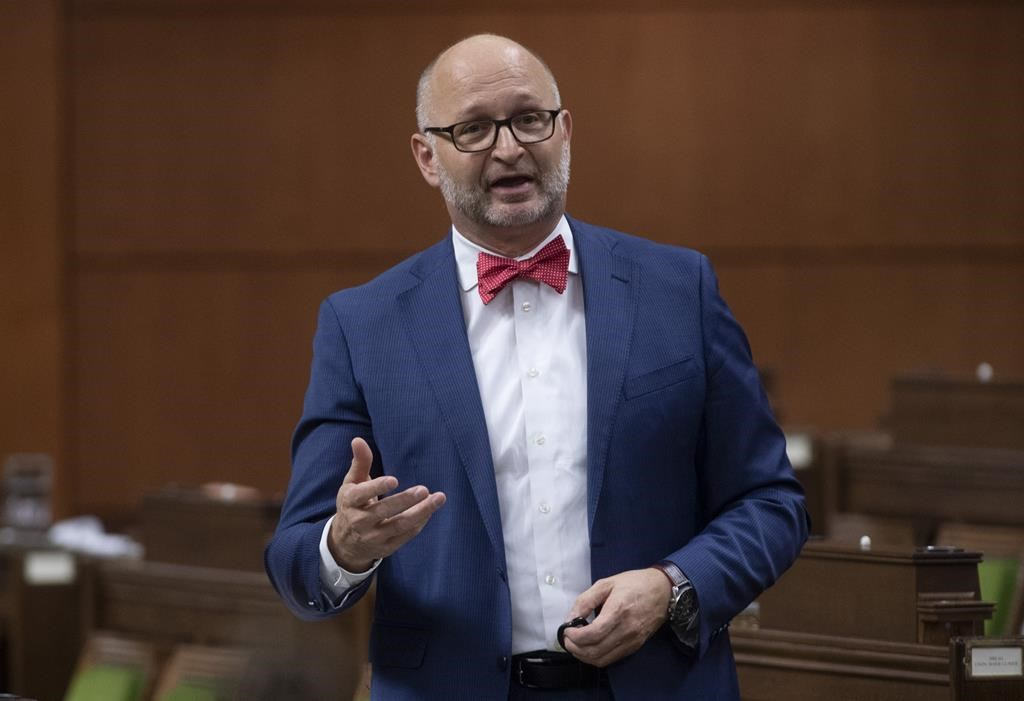 Justice Minister David Lametti responds to a question during question period in the House of Commons on Thursday, Oct. 22, 2020 in Ottawa. THE CANADIAN PRESS/Adrian Wyld
Previous story
Next story

TORONTO — Canada’s process for appointing federal judges is unconstitutional because it is open to partisan political interference, a new lawsuit claims.

The unproven application was filed in Federal Court by Democracy Watch, a non-profit advocating for democratic reform and government accountability.

In its court filing, Democracy Watch asserts the Canadian system gives too much discretionary power to the justice minister, who appoints all Federal Court and Superior Court judges. The application notes the cabinet position is itself a political appointment.

Currently, provincial advisory committees — members are chosen by the minister — submit a list of candidates to the minister. The minister, who has a dual role as attorney general, in turn puts the lists to cabinet as well as to members of Parliament from the governing party, the filing states.

Ultimately, the appointment decision falls to the minister "based, at least in part, on the opinions of these politicians from, and members of, the ruling party and hand-picked AG appointees," the application states.

"The AG’s discretionary and ultimately political role in the appointments system creates and perpetuates actual bias or the reasonable apprehension of bias."

However, Duff Conacher, with Democracy Watch, said there are similarities here.

"Like the U.S. judicial appointments system, Canada’s federal system is too open to political influence and control to ensure that appointments are based on merit, and that the judiciary is actually independent and impartial," Conacher, the group’s co-founder, said.

The lawsuit, yet to be tested, asks Federal Court to declare the system violates the Constitution and infringes fair trial and other rights. It also wants the court to offer direction on how to fix the alleged problem.

The government would not comment given the lawsuit is before the courts but a spokeswoman for Attorney General David Lametti defended the current system as non-partisan and merit-based.

The appointment decision takes in several factors, such as the needs of the court, the diversity of the bench and a candidate’s expertise, Rachel Rappaport said.

“Our government is proud of the more than 400 outstanding jurists, women and men, who we have appointed to the bench, and the transparent and accountable appointments process we put into place in 2016," Rappaport said in a statement.

According to the lawsuit, the minister’s control of who gets to sit on the bench creates a "politicized and partisan system."

The problem, the filing states, starts with the attorney general’s outsized role in appointing six of the seven members of provincial advisory councils, which recommend suitable candidates. The recommended list is forwarded for input to cabinet and various MPs from the government’s party among others.

Ultimately, the suit claims, the attorney general’s appointment choice is based at least in part on his hand-picked advisory panel and the opinions of the politicians and members of the governing party.

A key problem is the resulting "woeful" under-representation on the bench of women, visible minorities and Indigenous people, Democracy Watch alleges. This in turn risks harm to the disproportionately high numbers of Black and Indigenous people who face charges, it claims.

"Judicial independence is a foundational principle of fundamental justice," the suit states. "The control exercised by the AG, ultimately a political appointee and member of the federal cabinet, over the appointments system violates that independence guarantee."

I vote in elections in Canada

I vote in elections in Canada. In doing so, I contribute to the election of people to positions of responsibility in governance, which includes making judicial appointments. That's the job that I have deferred to people who have accepted that responsibility. I don't have time to review every proposed piece of legislation and every proposed appointment. The people who have launched the suit fail to understand that their very action is political in nature. They seem very much like what is happening currently in the US where someone is trying to use the courts to undo what the electorate has defined.

Yes, but....then we go into revising the electoral system to have better "proportional" representation...
How will that affect the appointment of various Ministerial positions - Justice among them. Would it not be more suitable to have a large selection of members of the judicial system select and elect new judges to the High Court? Just a thought.