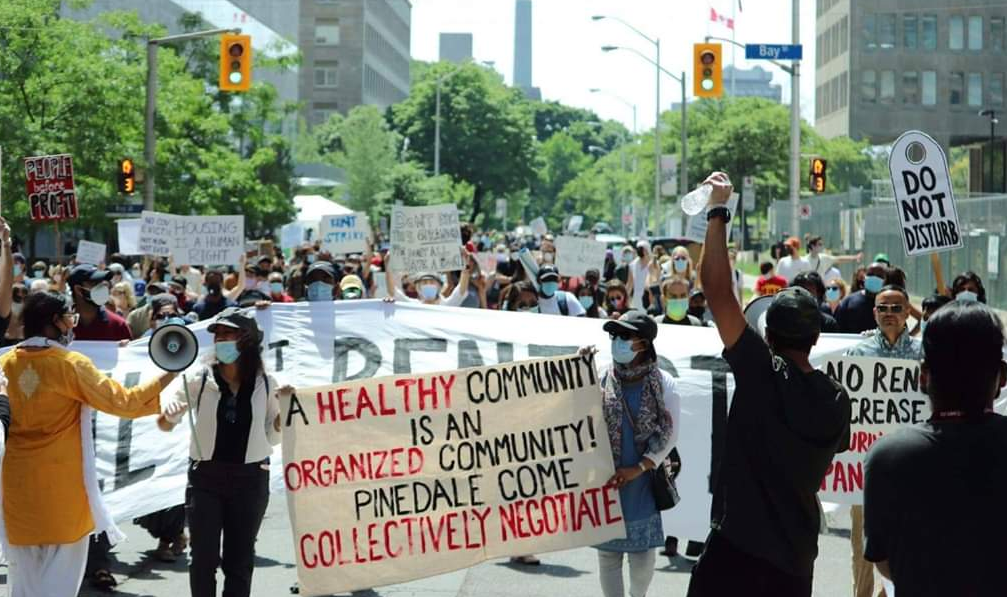 Tenants and advocates march from Queen's Park to the Landlord and Tenant Board earlier this year to protest evictions during the COVID-19 pandemic. Photo courtesy of Keep Your Rent
Previous story
Next story

Some 7,000 people are facing eviction hearings in Ontario this winter, and tenant advocates are urging solidarity among neighbours and across Toronto to keep people in their homes.

The Landlord and Tenant Board (LTB) is “in a full-throttle blitz to clear its backlog,” said Kenneth Hale, the director of legal services at the Advocacy Centre for Tenants Ontario (ACTO), noting there is a particular focus on processing eviction applications for non-payment.

While Premier Doug Ford promised earlier this year that no one would be evicted during the pandemic, his government lifted a moratorium on hearings back in August, and the LTB has since kicked back into gear despite higher COVID-19 caseloads than in the first wave.

“The government thinks that it’s more important that investors get paid than low-income people are protected from viral infection,” Hale said.

In response, the Keep Your Rent advocacy group is inviting those facing the tribunal to share details — they’ve collected more than a hundred of these so far — in order to better prepare them to fight.

“We are telling them that they need to be communicating with their neighbours, they need to realize that they are part of a bigger struggle, that they are not alone in being behind on rent during COVID,” said MaryAnn Icaro, who got active with Keep Your Rent early in the pandemic and has been observing hearings in the recent uptick.

“What we've been seeing, especially for these tenants that we are not in contact with, that are not organizing, that are isolated, they are finding themselves with standard orders,” she said, which typically give a tenant less than two weeks to pay their arrears.

After eight months of pandemic-related income loss, that could amount to thousands of dollars.

“Tenants have minutes to plead their case to these judges,” she said.

In one recent online hearing, she said neighbours and other supporters intervened by going down the hall to notify a tenant who had, in fact, paid their arrears and didn’t know they still needed to attend or that the landlord would not mention the payment.

A spokesperson for Tribunals Ontario, of which the LTB is a part, did not respond to a request for comment.

The Ford government has introduced legislation this year, Bill 184, which makes it easier for tenants to be evicted, including by waiving a requirement for another LTB hearing if a tenant agrees to a rent arrears plan and then misses a payment.

“These politicians will not save us, they’ve orchestrated this crisis,” Icaro said, noting that Keep Your Rent is instead focused on improving tenants’ negotiating position with their landlords.

This is what tenants in properties owned by corporate landlord MetCap Living plan to do this Saturday when they show up at the real estate company’s headquarters seeking a meeting with CEO Brent Merrill.

Tenants who have withheld rent since April plan to say they are willing to pay if Merrill agrees not to seek to evict those who can’t, Icaro said.

She also pointed out that tenants in various locations across the city, including in the Crescent Town neighbourhood near the Victoria Park subway station, have made it clear to their landlord that they will block any efforts by sheriffs to enforce evictions.

That may stave off the immediate threat, but ACTO’s Hale said a deeper reckoning with the housing crisis and troubles at the tenancy tribunal looms.

“Community efforts to fend off the sheriff are not going to be successful in the long run,” he said. “We need a justice system that works for everyone, including low-income people.”