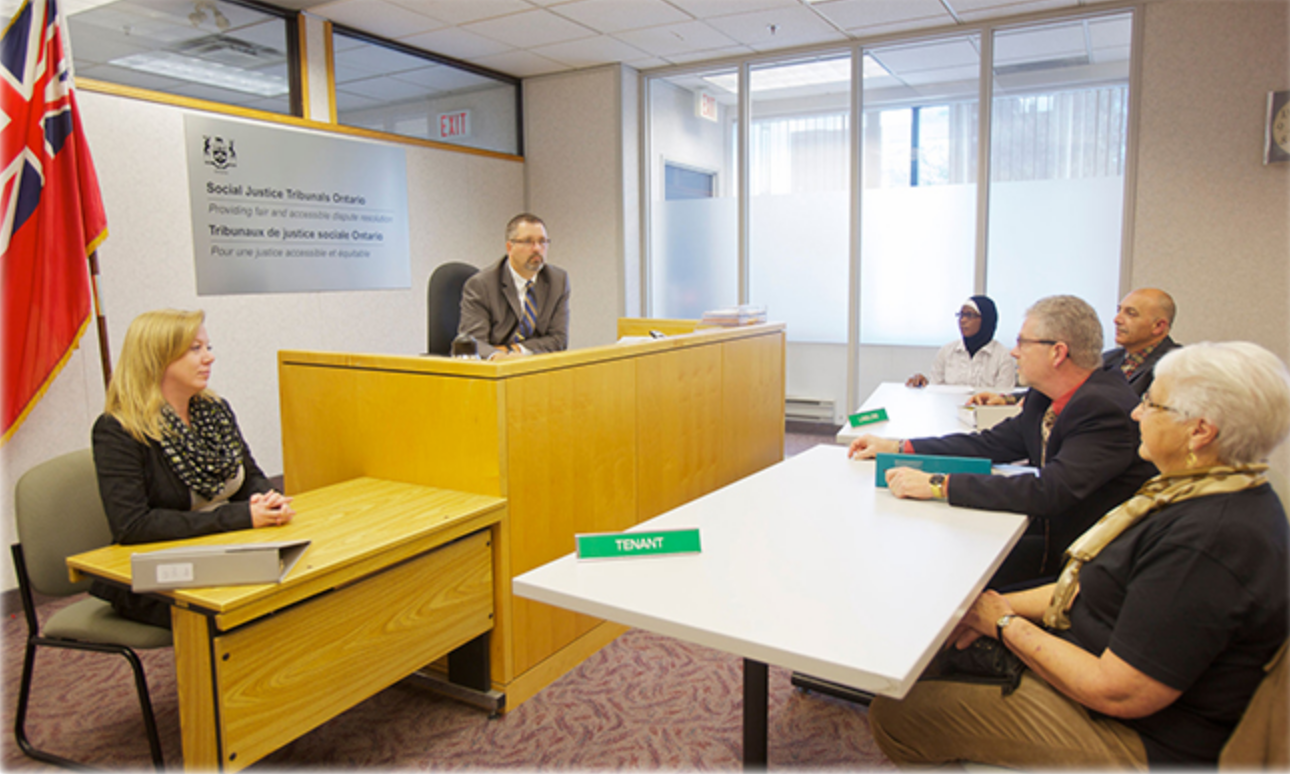 A hearing of the Landlord and Tenant Board. Photo via Tribunals Ontario 2017-18 annual report
Previous story
Next story

Almost 6,000 applications to evict tenants have been received by Ontario’s Landlord and Tenant Board since the start of April, adding to a backlog of cases the understaffed tribunal is now starting to schedule for hearings.

The number of applications filed each month have roughly halved since the Ford government declared a state of emergency March 17, but the board had until this week only heard the most urgent eviction cases where health and safety were at risk.

Now that the tenancy board is restarting regular operations, critics fear a wave of evictions could put the most vulnerable out on the street during the pandemic.

Younger renters — the single largest tenant demographic in Ontario — are among the most vulnerable because many are employed in precarious or part-time jobs that have disappeared because of the COVID-19 pandemic and related shutdowns.

The Landlord and Tenant Board processed 4,540 L1 applications between May 1 and July 31 this year, Tribunals Ontario spokesperson Rebecca Ganesathas told National Observer on Thursday.

An L1 application is a request for approval to evict a tenant for non-payment of rent and to collect rent the tenant owes.

She said processing means the application was received and assigned a file number, not that an eviction hearing had been scheduled or taken place.

Tribunals Ontario had previously said 1,405 applications were received in April, compared to the roughly 3,500 a month the board typically received before the pandemic.

Ontario's tenancy board has received almost 6,000 applications to evict tenants since the start of April, adding to a backlog of cases the understaffed tribunal this week resumed processing amid the COVID-19 public health crisis

The Ford government introduced an amended tenancy law last month that critics say will make it easier for landlords to evict tenants hit by job loss or other pandemic-related troubles.

Meanwhile, the ranks of adjudicators have thinned under Ford’s watch.

Tribunal Watch Ontario warned in May that the Landlord and Tenant Board, which makes close to 80,000 decisions a year, had shrunk from 53 members just before the election victory of Ford’s Progressive Conservatives to 40 in April.

“We fear that the quality of adjudications may decrease as the number of cases increase,” said Bahar Shadpour, a spokesperson for the Advocacy Centre for Tenants Ontario (ACTO). “We hope that tenants are given a fair chance to fully explain their circumstances and have them fully considered.”

She said the centre was part of an advisory group to discuss issues at the tenancy board that was disbanded just before the 2018 election and not brought back despite repeated requests.

Shadpour added that cuts to Legal Aid funding would also make it harder for tenants to navigate the quasi-legal system.

“There will definitely be more tenants going unrepresented because of cuts to Legal Aid funding and staff losses,” she said.

An ACTO snapshot from six major cities in Ontario in November last year found that less than three per cent of tenants brought legal representation to tenancy board hearings, compared to 80 per cent of landlords.

ACTO was later hit by a 10 per cent cut to funding for its tenant duty counsel program, which provides legal advice and representation.