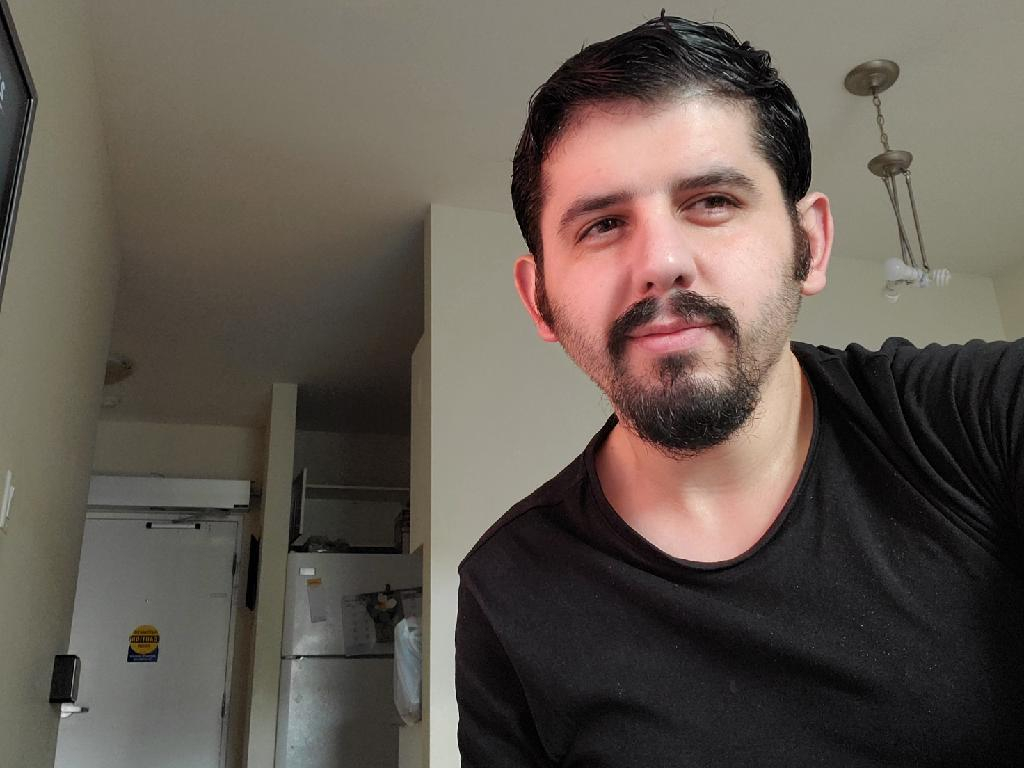 Hisham Alasbachi in his apartment, from which he fears he could be evicted. Photo supplied
Previous story
Next story

Hisham Alasbachi was preparing to fight his landlord’s effort to evict him when the COVID-19 pandemic shut down Ontario’s Landlord and Tenant Board.

Now that Premier Doug Ford’s government has won court approval for the tenancy board to dig into its eviction backlog, the 33-year-old former refugee from Syria is expecting to be among the first to be called up.

“I am expecting it any day and especially under the new law I am expecting them to come to my home and tell me you have to go out directly without anything,” he said in a phone interview.

“It’s really frustrating,” said Alasbachi, who uses a wheelchair and if evicted would have to find a fully accessible alternative. “I don’t know what to do.”

Alasbachi, who is also an executive member of the York South-Weston Tenants’ Union, said he knew of at least three tenants in his high-rise apartment building who have fallen behind on rent since the pandemic, and have in the past week been served with eviction papers.

“It is not just me, all my neighbours are all afraid, they don't know what to do, and they are saying they will be homeless,” he said.

The Ford government introduced an amended tenancy law last month that critics say will make it easier for landlords to evict tenants hit by job loss or other pandemic-related troubles.

It does not explicitly allow for hearings to be waived as Alasbachi says, unless a tenant signs a rent arrears repayment plan and later misses a payment. Tenant groups are urging renters not to sign such agreements amid the pandemic.

But Alasbachi is already on the firing line. He's one of at least 700 households that lawyers for the province’s attorney general told court on Friday had unenforced eviction orders pending against them, according to a lawyer for a tenant group seeking an immediate pause to evictions.

Benjamin Ries is acting on behalf of the Advocacy Centre for Tenants Ontario, which on Sunday heard that its push to pause the immediate resumption of eviction hearings had failed.

A judge has rejected a call for a stay on the resumption of eviction hearings at Ontario's Landlord and Tenant Board, meaning those cancelled due to COVID-19 can resume and new applications can be scheduled

That appeal related to court approval on July 6 of a request from the province’s attorney general to amend a moratorium on evictions put in place in the early days of COVID-19.

The government had asked for restrictions to lift soon after the state of emergency was lifted rather than when courts resume regular operations (as decreed in March) in an ex parte application, meaning tenants and tenant right groups were not privy to the motion or invited to argue its merits.

Ries argues that the government neglected to present a full and fair representation of the circumstances.

“The very next day, on July 7th, the attorney general introduced Bill 195, which in our view changed what the state of emergency even means,” Ries said, referring to the government’s omnibus law to allow for the reopening of the province’s economy.

“It allowed the state of emergency to end on July 24th, while giving the government the power to continue exercising a number of emergency powers for many months to follow,” he said.

Justice Myers of the Ontario Superior Court of Justice on Sunday ruled it was not for the courts to decide whether evictions should resume.

“They want to argue about whether evictions should be allowed in Ontario at this time,” Justice Myers wrote in the ruling about both tenant and landlord groups.

“Their concerns, as raised before me, are not properly directed at the Chief Justice’s order re-opening court enforcement services,” Justice Myers said. “Rather, there may be individual concerns for individual eviction proceedings and there may be systemic concerns that are properly addressed with the government.”

And so, less than a month after Bill 195 was introduced, eviction hearings are set to begin again.

Ries said a court ruling on the issue would be better than leaving it to government or the Landlord and Tenant Board to decide, since the same health risks apply to everyone affected, and that not all tenants facing eviction have the tools to navigate the legal system in a way that would force their changed circumstances due to COVID-19 to be addressed.

“And there is no guarantee of what the Landlord and Tenant Board would do in those individual cases anyway,” he said.

Chiara Padovani is another of the organizers of the York South-Weston Tenants’ Union, which includes tenant associations for 13 high-rise buildings, as well as other tenants in the area in the west end of Toronto.

“We’re preparing for a wave of evictions,” she said, adding that efforts to inform tenants of their rights and recent changes to tenancy law had also been made more difficult because of the pandemic.

She said the pandemic had also made organizing harder, with door-to-door work shifting to phone banks and virtual and outdoor meetings that she estimates thousands of residents are unable to access due to technological or other constraints.

“We’re telling our members not to sign anything,” she said. “Because they could be signing away their right to an eviction hearing, which is the last recourse for many tenants.”

Doug Ford despite taking reasonable action around the pandemic, there is a lot that he has not done. Doug talks the talk, but has not taken appropriate action in many areas. Doug could take more aggressive action in this area for tenants, but is more concerned with his buddies than the people of Ontario. Like LTC, a lot of talk and ZERO action. Conservative governments just don't work for Canadians.

Under the circustances, Landlords are shooting themselves in the foot. Granted - they have financial obligations as well as tenants do. Generally speaking though, they have more options for financial supports than do their tenants.

If wholesale eviction do occur in Ontario (and other jurisdictions) the obvious questions are: where do the evicted go? And more importantly, who in Ontario (or elswhere) can now afford to take on one of the suddenly available dwelling units left vacant? Does the sound of collapsing real estate values penetrate Queen's Park - along with the sight of the homeless milling about on street corners?

And, in the wings, lurk the vulture capitalists like the Blackstone group - waiting to add to their bulging portfolio of properties they have snapped up - world-wide. What are THEY going to do with them, now that the real estate market is imploding?

The world's so-called leaders seem helpless to gather their wits and solve this problem. If Covid doesn't kill their nations, homelessness will.

Landlords love evictions, because once the apartment is vacated, they are free to charge whatever rent the market will bear.
One wonders why an ex-parte application was allowed in the first place. My understanding has been that ex-parte motions are generally allowed only in urgent matters. I fail to understand how corporate landlords squeezing blood to get their pound of flesh amounts to urgency -- except on the part of tenants.
Lots of things have changed in law and its procedures since I worked in the field; however, it also used to be that unless an order arising from ex-parte motion had been consented to by the respondent in the motion, was subject to reversal.
The judge perhaps misunderstands what (s)he's been asked to do?
Access of poor people to justice (or to the judicial system) is a joke. I could write a book.

Real estate market imploding? July was a bonanza month for the real estate industry in Toronto; there, overall real estate prices were up 17% over the same month last year. I.e., investment "consultants" are still recommending residential property as a good investment.
It's not just the aptly termed "vulture capitalists" like Blackstone or "wealthy foreigners" who profit from the rent-evict-increase the rent cycle, before even *considering* the capital gains on their "investments" ... but the likes of doctors, lawyers, accountants, elected representatives of provincial and municipal mayors and councillors, who own buildings of various sizes, which they don't, haven't ever, and never intend to occupy: why would they: they have much better digs for their own use. Paid for from the profits of their scavenging and bottom-feeding on the real estate market.
That, m'dears, is a big part of why houses in Toronto are unaffordable absent an inheritance.
Apartment blocks are a different matter, where the Blackstone and wealthy foreign investors scenario prevails.
If anyone knows anything about the extent of public pension plans' real estate investments, that might be interesting information, too.