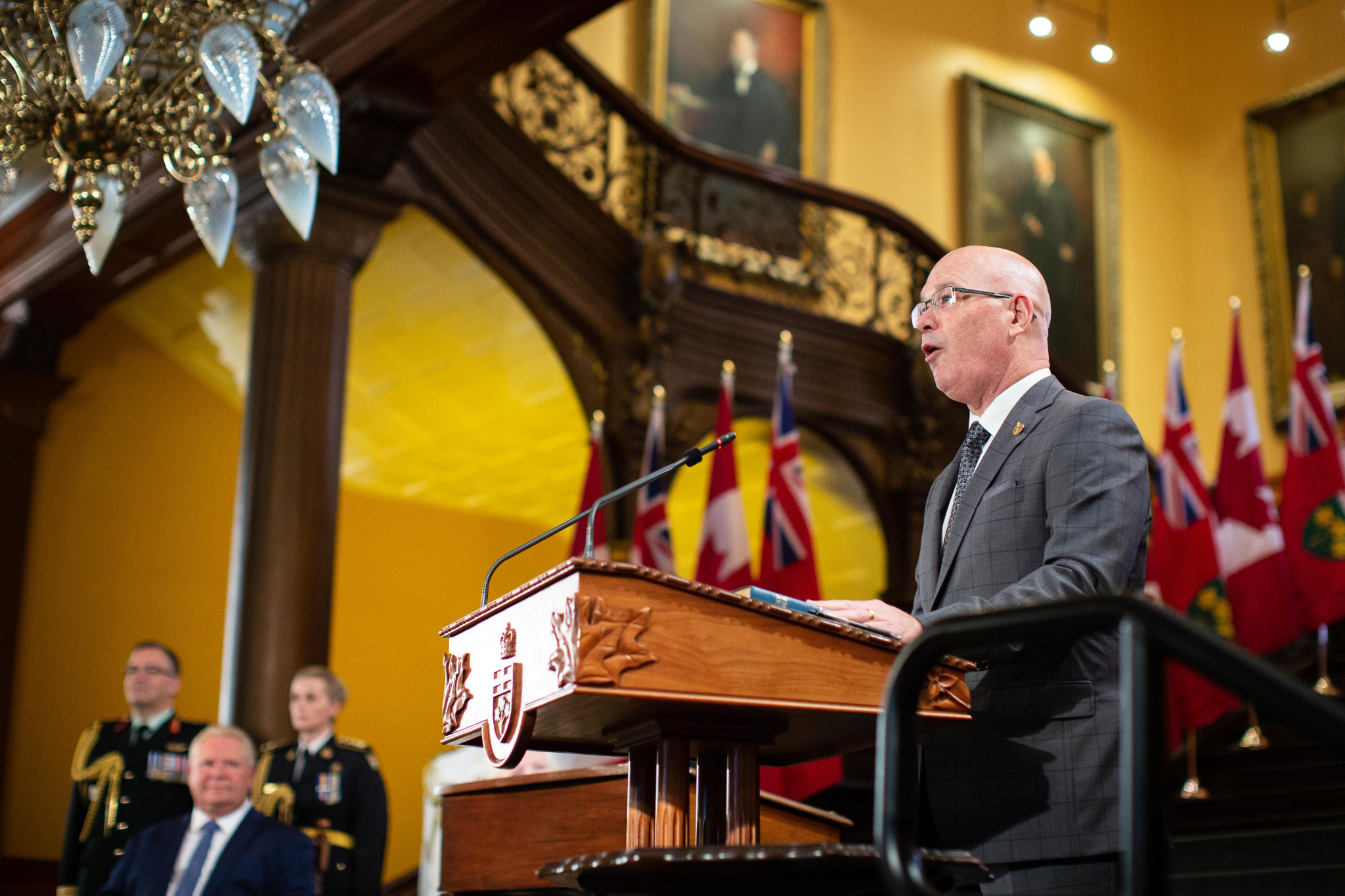 Ontario Municipal Affairs Minister Steve Clark, pictured in 2018, accused the Greenbelt Council of failing to deliver a plan to expand the protected area. Seven members of the council resigned over the weekend. File photo by Alex Tétreault
Previous story
Next story

In the wake of the resignation of seven Greenbelt Council members on the weekend, Ontario Municipal Affairs Minister Steve Clark announced that the province would invest $30 million over five years to create and restore wetlands.

In its first year, Ontario would spend $6 million to partner with conservation group Ducks Unlimited Canada on projects around the Great Lakes, Clark said Monday.

In response to a question about whether he would have announced the funding Monday if the mass exodus from the Greenbelt Council hadn’t happened over the weekend, Clark told reporters the investment had been in the works for “several weeks.”

“Our government has been clear that we are committed to preserving the Greenbelt and protecting our watersheds,” he said.

The announcement came following scathing remarks from the departing council members ⁠— including chair David Crombie, a former Progressive Conservative MP and Toronto mayor ⁠— who said in a flood of resignation letters that they were quitting in objection to proposed legislation that would gut the powers of conservation authorities. If passed, the changes would gut conservation authorities’ ability to protect crucial waterways and wetlands, some of which run through the Greenbelt, the members said.

Tim Gray, the executive director of the green non-profit Environmental Defence, said the $30-million investment does not make up for the damage that would be caused if the government passes the changes to conservation authorities.

“Wetlands are important, and restoration of damaged wetlands is laudable,” he said in a statement.

“However, the best way to have more wetlands is to remove (the legislation), which, if passed, will allow for the destruction of the most valuable wetlands Ontario has left.”

On Monday, Clark also said the departing Greenbelt Council members had “failed” to deliver on a request to come up with a plan to add new lands to the Greenbelt, a swath of protected lands surrounding the Greater Toronto Area.

“I have to tell you that I have been frustrated over the last several months,” Clark said, adding that he wished the outgoing members well.

Ontario Municipal Affairs Minister Steve Clark said the government would forge ahead with changes to conservation authorities, which have sparked backlash from fellow Conservatives and mass resignations from the province's Greenbelt Council. #onpoli

“I’m going to turn the page and work with the existing members who remain, and some new members.”

Ontario NDP climate critic Peter Tabuns said it didn’t make sense for Clark to allege that the Greenbelt Council members ⁠— government-appointed experts tasked with advising the province on how best to preserve the area ⁠— weren’t interested in making it better. (The Progressive Conservatives signalled plans to expand the Greenbelt last month in its 2020 budget, but didn’t include specifics.)

“These are people who are committed to the Greenbelt,” Tabuns said, calling the assertion “not credible.”

“It is unbelievably concerning to see how irresponsible the (Progressive Conservatives) are when it comes to protecting our environment,” the MPPs said.

In Ontario, 36 conservation authorities oversee watershed systems. Using a system designed in the wake of fatal flooding from hurricane Hazel in 1954, the agencies manage flood control and water quality, granting and denying permits for construction in areas near waterways.

The changes to the rules governing conservation authorities were included in omnibus Bill 229, which is meant to enact measures from the government’s budget. The proposed legislation is being debated this week at Queen’s Park, and is likely to pass since the Progressive Conservatives hold a majority.

The Tories have faced backlash on the changes from a growing list of municipalities, environmental groups and the conservation authorities themselves. The Greenbelt Council also raised concerns. But the Tories doubled down on Friday, adding a new set of amendments that would force conservation authorities to approve developments and allow developers to pay a fee in exchange for destroying endangered species habitat.

“They backed up a big truck and dumped a whole bunch of amendments that made it worse … I felt that I had to resign,” he said.

Ontario Green Party Leader Mike Schreiner said in a statement Monday that it’s “far cheaper” to protect existing wetlands than pay $30 million to restore damaged ones. He also pointed to growing opposition to Bill 229 ⁠— including from Toronto and Region Conservation Authority chair Jennifer Innis, a longtime Conservative who said in an open letter Sunday that the government’s direction “no longer aligns” with her values.

Letter from Conservative Chair of TRCA’s Board of Directors Jennifer Innis. "If you are not worried, you are not paying attention..... I appeal to everyone reading this letter to contact the Premier and your local MPP immediately to ask them to remove Schedule 6 from Bill 229.” pic.twitter.com/Lsa4mo5u92

“Ford’s attack on the rules and regulations that protect the people and places we love in Ontario must stop,” Schreiner said.

“The price of his actions are too high.”

I cant believe there are no

I cant believe there are no comments on this wicked wicked piece of legislation. Perhaps, like me, others are speechless at the boneheaded stupidity of pay to slay as a policy for the future. Wicked greedy stupid men and women. You will be despised and condemned by future gens ( if there are any) as an example of capitalism endstage madness.

Greenbelt Council resignations are clear evidence of long term frustration with the current Government's anti-environmental actions. The Greenbelt has been under attack since its inception - variously described as a "noose around the neck of the GTA", and other "anti-development" pejoratives, it has become the flash point for environmentalists to rise up in wrath at the hubris and greed of the PC government's reckless approach to climate disaster and land exploitation.

As anyone knows, who even cursorily follows the fraught issue of the Conservation Authorities and the systematic despoliation of Canada's Boreal zone, Ontario has a lengthy history of colonial settler destruction and profiteering from the bonanza of "cheap/free" land. Throughout our existence the Ontario land mass and it's contents has been treated as an endless source of wealth with no regard to the irreversible damages wrought upon it. NO immigrant European arrived on these shores with a determination to act as a steward of this land, The earliest arrivals regarded life here as an existential struggle for survival - an endless battle against nature required to extract the wealth denied them by the entrenched caste system they fled.

As a result, that attitude is the bedrock of New World capitalism. Canadian companies have employed and exported the ruthless practice of ripping ecosystems to shreds, erasing indigenous rights/claims to land sovereignty, leaving in their wake scars that in the now immortal phrase, "can be seen from space".

The Hon. Mr. Clark claims to have been trying to expand the Greenbelt. I'd like to know the detail s of that endeavor. He, if he is up to the job, must know better than most how grim are the forces of exploitation by municipalities and developers arrayed against the mere notion of Conservation, of "useless" natural land that produces no measurable wealth.

This knee jerk belief system is what governs the PC party; always has and most likely always will unless Ontarians rebel.