Crackdown on Indigenous land protests in 2020 infringes on liberties and activism: experts 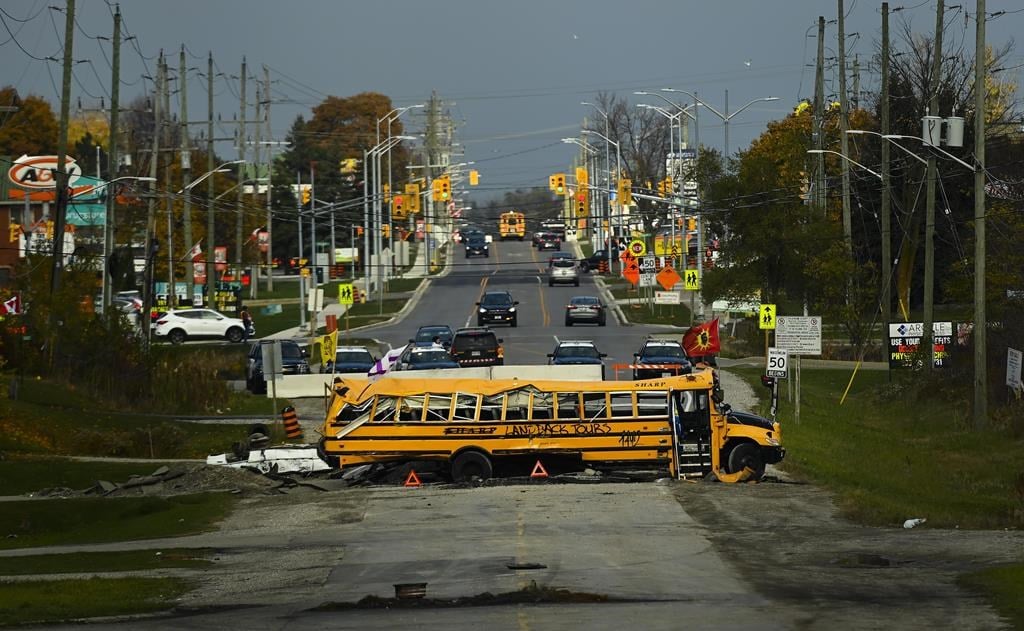 A school bus blocks the roadway which is near a construction site at the centre of an Indigenous land dispute in Caledonia, Ont., on Thursday, October 29, 2020. File photo by The Canadian Press/Nathan Denette
Previous story
Next story

Months after a group of Haudenosaunee people set up camp on a construction site near Caledonia, Ont., an provincial court granted Haldimand County an order permanently forbidding people from “interfering” with any public road.

A lawyer for the county argued that the injunction was the “only remedy” to keep roads open in the event of future blockades over disputed land.

“I kind of jokingly -- but not jokingly – say, if you get a flat tire and are impeding traffic with that flat tire in any kind of way, you are now breaching that injunction,” Skyler Williams, a spokesman for the 1492 Land Back Lane camp, said in a recent phone interview.

The Haudenosaunee protesters argue the site of the housing development is on unceded land. Williams and more than 30 others who call themselves "land defenders" refused to obey the court order and are now facing charges.

The county’s move to effectively ban protest indefinitely is part of a broader trend as governments at various levels crack down on Indigenous-led land protests. Some provinces have introduced legislation that experts warn infringes on civil liberties and could have a chilling effect on future activism.

After blockades in solidarity with Wetsu’we’ten hereditary leaders opposing a pipeline through their territory near Smithers, B.C., shut down railways and roads last winter, Alberta’s governing United Conservative Party introduced a bill outlawing disruptions to “critical infrastructure,” broadly defined to include highways, railways and pipelines.

The bill, which became law in June, carries fines up to $25,000 and six months in jail for each day of an alleged violation. Manitoba’s Progressive Conservative government has said it plans to introduce similar legislation next year, with the fine print under wraps until then.

“These bills are meant to, I think, head off these movements at the pass by issuing blanket criminalization of any kind of action actions or interventions to infrastructure,” she said by phone.

Pasternak said she agrees with critics in Alberta’s legal community who argue the Critical Infrastructure Defence Act violates Charter rights. It also has an amplified effect on Indigenous people who have special constitutional rights to the land, she said.

The law fits with Canada’s historic attempts to restrict Indigenous people's mobility, Pasternak said, pointing to the pass system that required people to present documentation in order to leave reserves.

“Now, you see what's been the history and the legacy of Canadian colonialism being applied to the Canadian population more generally,” she said.

Cara Zwibel with the Canadian Civil Liberties Association said laws like Alberta’s that target Indigenous protesters show “intolerance for the fact that democracy can be messy,” and stoke divisions between Indigenous communities and non-Indigenous neighbours who aren’t informed about the history behind the conflicts.

There are ripple effects when governments target one group of people with such legislation, she added.

“If one group doesn't have the right to protest then no one really does,” Zwibel said in an interview.

Zwibel said the non-profit may join a constitutional challenge of Alberta’s law filed by the Alberta Union of Provincial Employees, depending on the outcome of a January hearing on the government’s request that the claim be struck.

The statement of claim from the union filed in June argues that the Act “will have a chilling effect on legitimate and peaceful protests, demonstrations, strikes and leafleting, activities essential to a healthy democracy.”

A statement from a spokesman for Alberta’s justice minister denied that the infrastructure law targets people by race, and said it does not restrict protected rights to freedom of expression and assembly.

“Albertans understand the difference between legitimate protest and criminal acts designed to shut down the economy,” Blaise Boehmer’s statement said.

There is also a court challenge underway appealing the permanent injunction orders against the 1492 Land Back Lane camp in Ontario.

Haldimand County Mayor Ken Hewitt said he doesn't want to take away the right to protest, but he's considering the "rights of those that can't traverse across these streets," and people waiting to move into the housing development.

"I'd say that everybody has the right to protest, but when that line is crossed, where the protest now infringes on those that are innocent, how far can you go," Hewitt said in an interview.

Pasternak said the Haldimand court challenge will likely be closely watched, saying a win for the protesters would create “more legal uncertainty for infrastructure projects” – in which case, a law like Alberta’s would offer governments and companies a shortcut around similar constitutional challenges.

The federal Liberals’ recent move to bring the UN Declaration on the Rights of Indigenous People into law may also gives Indigenous people more legal options in future cases, Pasternak said, though the exact application of the law in Canada is still unclear.

Hayden King, executive director of the Yellowhead Institute, said the recent trend of “disciplinary, oppressive response” to land defence movements signals the end of a recent period of dialogue between Indigenous and Canadian governments, and it shows the limits of reconciliation in those relationships.

Despite increasingly “draconian” responses to conflicts over land in several provinces, King said that young Indigenous activists and leaders appear eager to keep the movements alive.

This report by The Canadian Press was first published on Dec. 10, 2020.