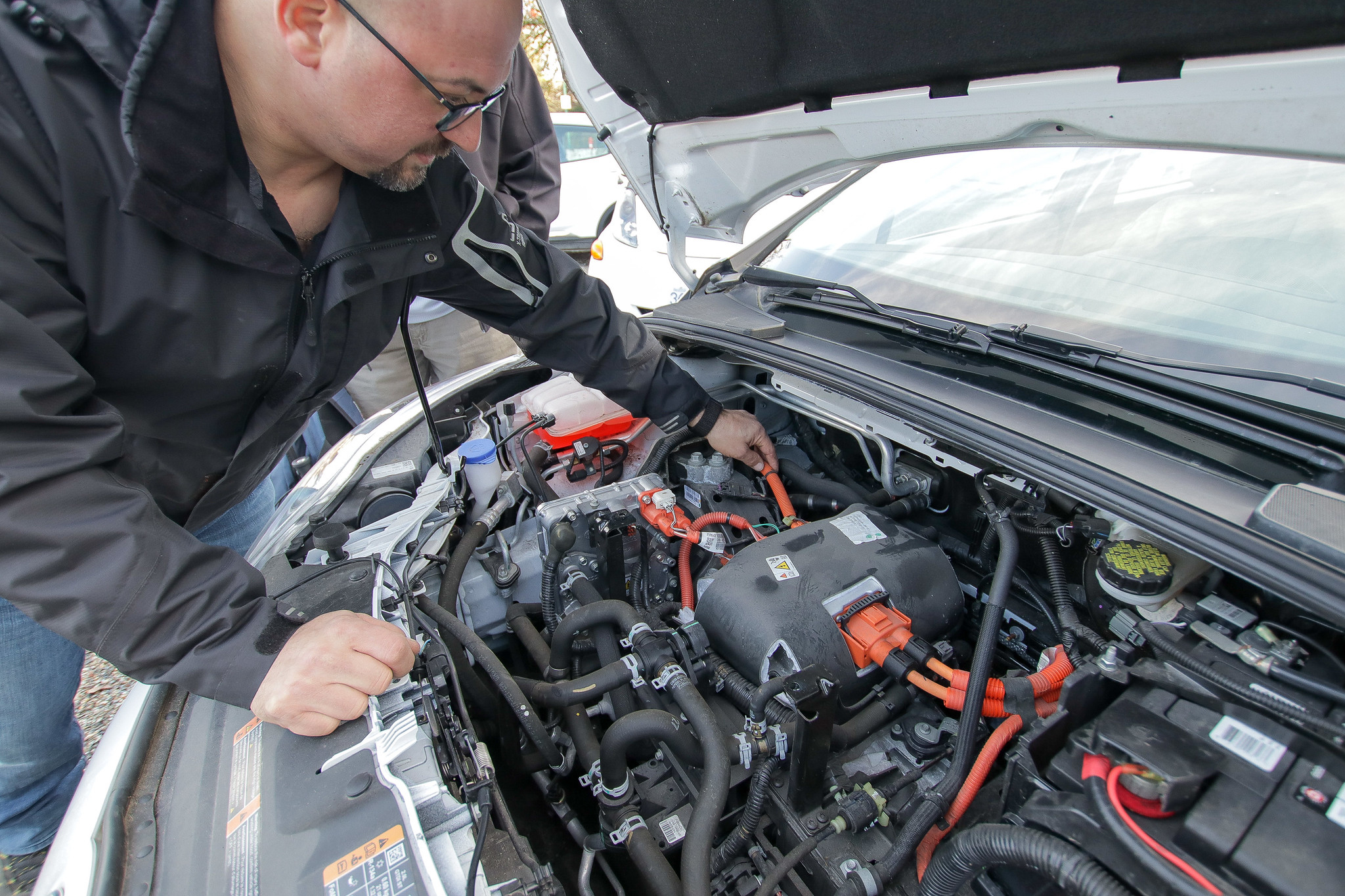 A man checks out the high-voltage orange wires on an electric vehicle in British Columbia. Photo from B.C. government
Previous story
Next story

Automakers expect the Biden administration will open the door to closer North American co-operation on emissions rules, which, in turn, will juice sales of electric cars.

That goal is worthy, autoworkers say — as long as it also includes an industrial strategy that is fair and inclusive for Canadian workers, potentially including rules surrounding domestic content or environmental and labour conditions attached to imports.

Canada will be discussing with the U.S. several paths forward, Wilkinson told Reuters on Thursday, including the possibility of banning “the sale of internal combustion engines” that power vehicles that burn fossil fuels like gasoline or diesel, or a sales mandate for a certain percentage of new cars sold to be zero-emission.

The minister’s home province of British Columbia, as well as Quebec, has laws in place that require automakers to meet certain thresholds of electric vehicle (EV) sales. Quebec will ban sales of new gasoline-powered light-duty vehicles by 2035, while B.C. will ban them by 2040.

The federal government itself has set a zero-emission vehicles “target” of 10 per cent light-duty vehicle sales per year by 2025, rising to 100 per cent by 2040.

GAC, an industry group representing the Canadian subsidiaries of Toyota, Volkswagen and other large foreign auto firms, expects “a renewed focus on both climate change and vehicle electrification” with the Biden administration in power, said Adams.

“You may well see all three countries in the North American region working more closely together,” Adams predicted.

“Greenhouse gas emissions regulations will be more similar in North America, which will ultimately drive more EV sales, as stringent standards significantly narrow the options for compliance — meaning that more EVs will need to be brought to the market for manufacturers to be compliant.”

Carbon pollution from the transportation sector makes up a quarter of all of Canada’s emissions, and globally, road transport accounts for over a tenth of greenhouse gases.

The federal government’s new climate plan discusses a desire to “facilitate a global transition to zero-emission vehicles in line with the goals of the Paris Agreement.”

The climate plan indicated that Canada would join a new international effort called the Zero Emission Vehicle Transition Council, made of members that “collectively account for around half of all new vehicle sales globally.”

The organization put out a “joint statement” on Nov. 27 that was signed by Transport Minister Marc Garneau and Mexican Economy Minister Graciela Márquez Colín — as well as representatives from California, Japan, South Korea and several other countries. California is also looking to ban sales of cars powered by gasoline or diesel by 2035.

The council said in its statement that it has a responsibility to accelerate EV adoption, including “ensuring the life cycle (from production to scrapping) of zero-emission vehicles is sustainable and inclusive.”

Notably missing from the signatories was a national representative from the United States. Adams said the fact that the U.S. is not a participant could be what drove Canada to participate in the first place — “looking to seek common positioning and goals with other jurisdictions that have the same aspirations.”

‘Made in America’ and Canada

Biden’s climate plan calls for the acceleration of EV deployment, the deployment of over 500,000 public charging stations by 2030 and an electric vehicle tax credit to incentivize purchasing of “made in America” vehicles “to the greatest extent possible.”

The North American auto supply chain is highly integrated — diplomats are fond of pointing out how auto parts cross the border many times before a finished product emerges.

The integrated nature was on full display this year as the COVID-19 pandemic led to shutdowns and other restrictions that disrupted the supply chain, according to Statistics Canada.

Angelo DiCaro, director of research at Unifor — the union representing over 40,000 members in the auto business, from assembly lines to manufacturing and dealerships — told the House of Commons environment committee in November that there needed to be a “coherent auto sector development strategy” to capitalize on the momentum from the Ford and Chrysler assembly plant transitions.

An effective strategy must involve “careful supply chain mapping to identify gaps and localize investment targets,” he noted. “It must include content rules for fleet purchases and vehicle afterlife requirements, linking disassembly and recycling to job creation.”

And everything needs to be joined with “progressive trade policy,” said DiCaro, “including measures that disincentivize imports of greenhouse gas-intensive products and that attach strict environmental and labour conditions on goods entering the Canadian market.”