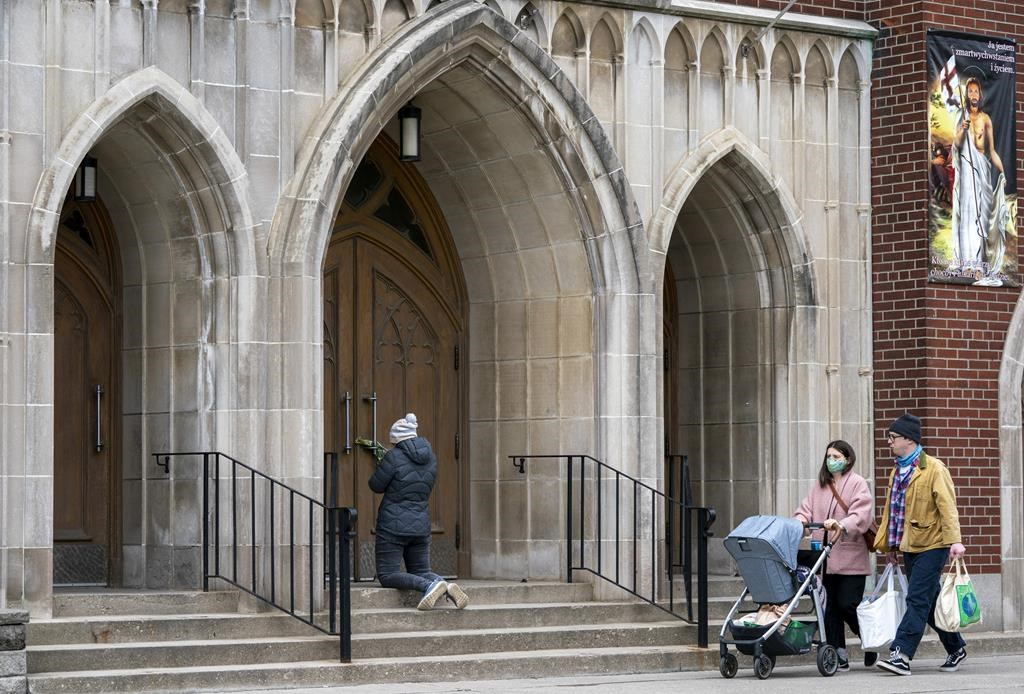 A woman prays on the steps outside St. Casimir Church in Toronto on Friday, May 1, 2020. File photo by The Canadian Press/Frank Gunn
Previous story
Next story

It is a question Rev. Harrison Ayre finds himself asking and being asked often as the COVID-19 pandemic has left nearly two million dead worldwide; 80 million sickened; families torn apart by death, disease and border closures; economies devastated; and an uncertain year looming ahead.

As a Catholic priest in Nanaimo, B.C., he's among thousands of religious leaders who have worked this year to help their congregations make sense of the pandemic in spiritual terms.

Religions have historically seen disease as divine judgment or punishment: the Old Testament contains a story of plagues against Egyptians for refusing to free the Jews, while one Islamic response to the "Black Death" of the 14th century was to call those who lost their lives martyrs for God.

Judgment is not always a bad thing, Ayre said.

"It is a challenge to return to the heart of things," he said.

"It's not a judgment unto condemnation. It's a judgment to bring us back to fall in love with (God)."

How to do that during a pandemic is both existential and practical.

Physical distancing restrictions have forced faith groups to entirely close their doors or dramatically restrict access to their sanctuaries.

This fall, a coalition of Christian research organizations surveyed 1,269 churches and ministries and found 80 per cent were offering online services.

But that doesn't work for all faiths, said Prof. Sabina Magliocco, who leads the religion program at the University of British Columbia.

Where is #God? The #COVID19 #pandemic has been a test of faith for believers.

For Indigenous faith practice, gathering extended kin for singing, dancing and acts of hospitality has been sharply curtailed by COVID-19 restrictions, she said, and just can't be replicated online.

Also, some don't have access to the technology — often, the same people whose kids have trouble getting online for school: those who live in rural communities with poor internet connectivity and people who can't afford the devices.

The spiritual uplift that comes from attending services in person isn't just about participating in rites and rituals, but also the intangibles, Magliocco said.

The energy of attending Friday sermon at mosque, chanting and dancing with extended family, or just the sights and smells triggered by walking in the door of a house of worship are all elements of connection in their own right.

"There aren't those outside clues, hints that put your mind in that religious place that connect you to community, that connects you to your ancestors — all of that is gone," said Magliocco.

Then there are theological issues.

For observant Jews, using electronics is forbidden on religious days.

Some found workarounds; during the Jewish high holy days in September, congregations began livestreaming from their synagogues before the holidays began and just left the cameras running.

For Catholics, the fundamental rites known as the sacraments must be done in person. For a time, Ayre heard confession in a parking lot, where parishioners would drive in and roll their windows down a crack to unburden their souls.

For Muslims, the pandemic has meant a renewed emphasis on certain requirements, like ritual purification before prayer, five times a day, said Imam Mohamed Refaat, the president of the Canadian Council of Imams.

Within the Qur’an, there are also teachings from the Prophet Muhammad that directly relate to staying away from places known to be infected with the plague.

While Muslims can and do pray at home, Refaat said the loss of community gatherings and the end of annual trips to the holiest site of Islam, at Mecca in Saudi Arabia, are painful.

For him, the lesson is to value what has been given by God: the ability to talk and travel and do good in the world.

When those blessings are taken away, it is a reminder of their worth, he said.

"When we get ourselves back to normal, then we will recognize that those blessings should be maintained," he said.

"And we should be thankful to our Lord for giving us all these blessings."

What it will take to get back to normal at minimum is a vaccine against the virus that causes COVID-19, most faith groups say.

Convincing their followers to take it will be the next challenge.

Mainstream religious leaders have issued proclamations in support of the vaccine; the first people to get it in Montreal were residents and staff at a Jewish nursing home where dozens have died.

Opposition by religious leaders to vaccines in the past has been based on a number of factors, including what kind of human cells are used in testing and where they are from, and a belief that the divine, and not science, will protect the faithful.

Those voices are already challenging this vaccine, and earlier this month, the role religious leaders can play to quiet them was part of a call between Prime Minister Justin Trudeau and faith leaders.

But the real source of tension on the call wasn't the coming shot in the arm.

It was the shot to the heart religious groups received by being told they didn't qualify as "essential services" during the pandemic, and in turn were subject to tighter restrictions than gyms or bars.

Refaat said while religious groups, health officials and politicians have been talking for months about the balance between protecting people's right to worship and public health, what's missing is an acknowledgment of the central role communal religious life plays.

"The weekly sermon people attend, that gathering of people together, you're charging your battery for the rest of the week. And that charging is big for people of faith," he said,

"It is so essential for them."

Various religious groups in the U.S. have taken governments to court for restricting access to faith gatherings.

The process is only just beginning to play out in Canada; arguments in one case involving a Toronto church claiming COVID-19 restrictions violate charter rights are expected sometime in 2021.

The pandemic has exposed two challenges for the faithful, said Andrew Bennett, the director of the Cardus religious freedom institute and an ordained deacon: What do they need to actually live a religious life? And how much of that requires physically going to church or mosque or synagogue?

The answers may determine what Canada's post-pandemic religious landscape looks like, he said.

"These are challenges that faith communities are going to need to address."