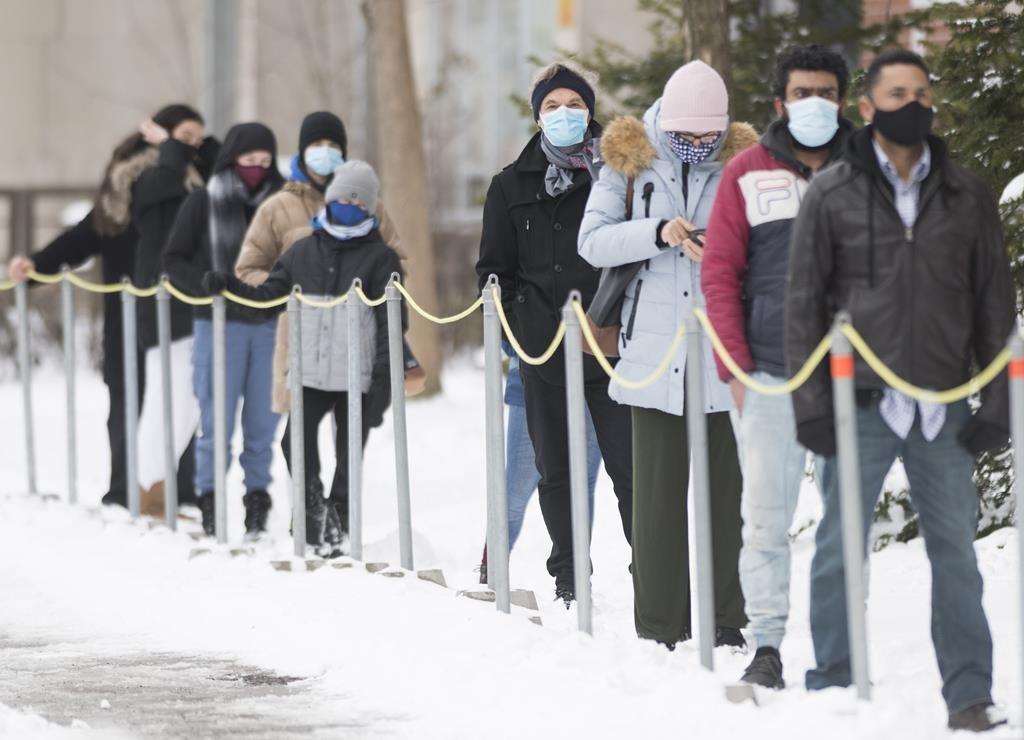 People wear face masks as they wait to be tested for COVID-19 at a clinic in Montreal, on Sunday, Jan. 3, 2021. File photo by The Canadian Press/Graham Hughes
Previous story
Next story

Surges in COVID-19 cases and hospitalizations across several provinces prompted warnings on Monday from public health experts, who said stricter measures and adherence to guidelines are needed in the days and weeks ahead.

Ontario reported 3,270 new cases of COVID-19 and 29 more deaths attributed to the novel coronavirus on Monday, while officials in Quebec reported 2,546 new infections and 32 more deaths.

One expert in Quebec said the province should impose a curfew to ensure people are in their homes at a certain hour — a move that was recently imposed in France. "The government bet on a partial lockdown to reduce the number of cases. It didn't work," Roxane Borges Da Silva, a professor at Universite de Montreal's school of public health, said in an interview Monday.

She said the stricter measures could also include the closure of the manufacturing sector, which accounts for many COVID-19 outbreaks. "We don't have room to manoeuvre. We have no choice but to put in place strict measures that will really work. We can't afford to do more trial and error," Borges Da Silva said.

Quebec and Ontario imposed partial lockdown rules over the holiday period in an effort to get the pandemic under control and ease pressure on their strained health-care networks. But health-care workers and public health experts continue to raise concerns over rates of infections and hospitalizations in both provinces.

Dr. Nadia Alam, a family doctor in Georgetown, Ont., northwest of Toronto, and past president of the Ontario Medical Association, said many people are feeling "pandemic fatigue."

Alam said many Ontarians are following public health directives, but some, she said, do not have the social support they need to adhere to the regulations. Others, she said, are bucking the rules because they do not take the pandemic seriously.

The result is "a crisis in health care" and the exhaustion of health-care workers, particularly in long-term care homes and hospitals in Ontario, Alam said in an interview. "We're stretched so thin. It's a bit of a nightmare. The vaccine gave us all hope — and it is giving us hope — but right now are very difficult times."

Surges in #COVID19 cases and hospitalizations across several provinces prompted warnings on Jan. 4, 2021, from public health experts, who said stricter measures and adherence to guidelines are needed in the days and weeks ahead. #CdnPoli #COVIDCanada

Health authorities in Saskatchewan reported 286 new cases of COVID-19 on Monday and two more deaths attributed to the novel coronavirus. The province said 180 people were in hospital, including 35 receiving intensive care.

Meanwhile, Canadian politicians at the federal and provincial levels are facing criticism for taking trips abroad despite advice to avoid non-essential travel. Frustrations have been especially high in Alberta, where at least six members of the province’s United Conservative government travelled outside the country during the holiday period.

On Monday afternoon, Premier Jason Kenney said he had accepted the resignation of the province's municipal affairs minister and asked his chief of staff to step down. Four other party members also lost their committee and other parliamentary responsibilities.

"By travelling abroad over the holidays, these individuals demonstrated extremely poor judgment," Kenney said in a Facebook post.

Dr. Alika Lafontaine, an anesthesiologist in Grande Prairie, Alta., and past president of the Indigenous Physicians Association of Canada, said it was "disheartening" to see politicians ignore travel advice. "I'm actually quite concerned that Albertans will take that as a signal that maybe the pandemic isn't … as bad as it really is," Lafontaine said in an interview Monday.

Alberta's chief medical officer of health, Dr. Deena Hinshaw, said Sunday an estimated 400 new COVID-19 cases had been identified in the province on Jan. 2. Hospitalizations and intensive care admissions were stable, she said in a tweet.

Lafontaine said, however, that ICU admissions are not decreasing fast enough, adding that he feared the health-care system as a whole — and regional hospitals like where he works, in particular — could be overwhelmed. "At the stage that we're at right now with hospitalizations, I think our system is on the verge of being overwhelmed if it does get worse," he said.

That's why public health guidelines need to be followed closely, Lafontaine said, adding that politicians should be setting an example. "We all have to treat this pandemic as the health crisis that it actually is, and that starts at the top."

That was echoed by Dr. Donald Vinh, an infectious disease specialist and medical microbiologist at the McGill University Health Centre in Montreal, who said COVID-19 infections will only decrease if everyone follows public health measures.

"Collectively, we need to bend this curve down and we need to do it through intense adherence to public health measures, consistently, everywhere, by everyone," Vinh said.

This report by The Canadian Press was first published Jan. 4, 2020.

— With files from Sarah Smellie in St. John's and Stephanie Taylor in Regina.