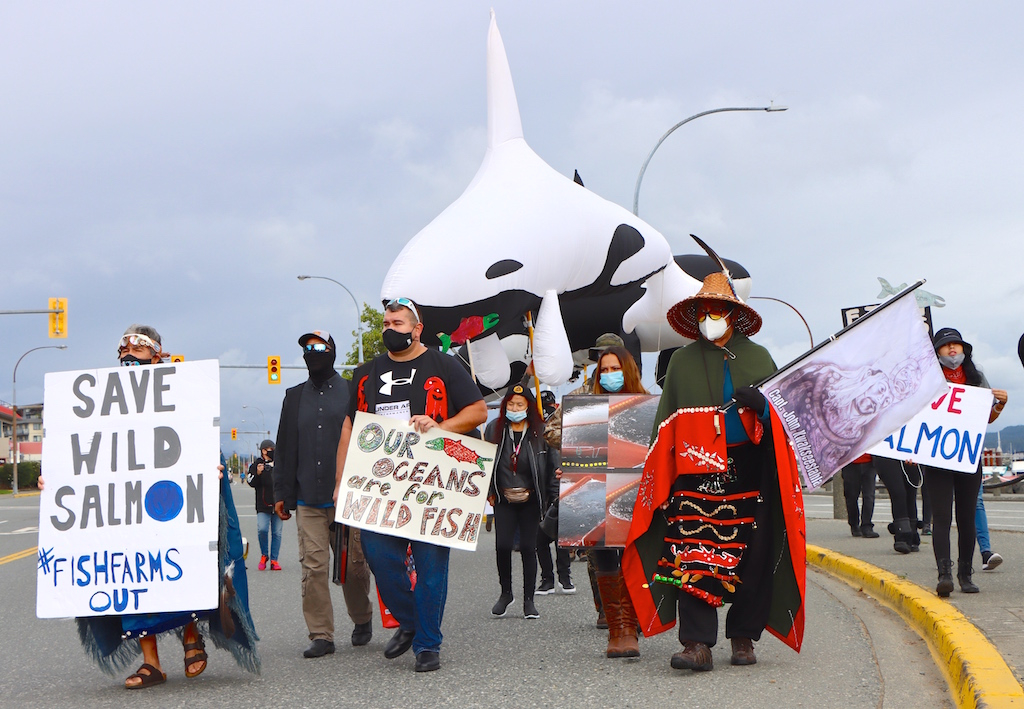 Many fish farm opponents, pictured above at a protest in Campbell River this fall, are celebrating Ottawa’s decision to phase out operations based in the Discovery Islands on the West Coast. Photo by Rochelle Baker
Previous story
Next story

Fish farm opponents on the West Coast are jubilant after Ottawa’s announcement Thursday that operations in the Discovery Islands are being phased out over the next 18 months.

“I was very happy with this decision. And it certainly must have been a difficult one for the minister to make,” Chamberlin said.

“But it’s the correct decision at a very critical time for all salmon in British Columbia.”

The 19 salmon farms in the region, nine of which are already empty, had their licences renewed to June 30, 2022, so operators can grow some three million fish to market size. In the meantime, no new fish can be stocked at the farms.

The decision was largely based on consultations with the Homalco, Klahoose, K’ómoks, Kwiakah, Tla’amin, We Wai Kai and Wei Wai Kum First Nations, whose traditional territories fall within the Discovery Islands, the fisheries minister said.

Homalco Chief Darren Blaney said the decision benefits wild salmon since their stocks are in decline across the coast and there have been historic low runs on the Fraser River.

Getting fish farms out of the path of juvenile sockeye salmon migrating from the Fraser, and young chum and coho leaving his nation’s river systems in Bute Inlet, will improve their chances of survival, Blaney said.

“It’s a good day for wild salmon,” said Bob Chamberlin, chair of the First Nations Wild Salmon Alliance, about Ottawa's decision Thursday to phase out fish farms in Discovery Islands on the B.C. coast over the next 18 months. #wildsalmon

“Now those fish will have a better chance of getting back to the rivers four years later,” he said.

“Overall, I think this is a really positive announcement,” said Proboszcz, who commended First Nations in the region and Chamberlin for their role in making the decision happen.

THEY WON!!!!! #Salmon farms are LEAVING the #FraserRiver #Sockeye migration route!
An unbelievable victory by the leadership of the Nations of the Discovery Islands, @1Bob_Chamberlin and the Fraser River Nations who informed the federal government this fight was just beginning! pic.twitter.com/wpFC6NUgDd

However, Proboszcz sounded a cautionary note about the continuing need to regulate and monitor fish farm operations over the next year and a half.

“We also need to monitor this area during the spring wild salmon out-migration because there will still be some farmed salmon in the area potentially spreading parasites and viruses,” he said.

As well, political pressure needed to be maintained so that, should a federal election occur next year, a new government would honour the decisions made Thursday, Proboszcz added.

The federal government still has to come up with its 2025 plan to transition away from open-net pen fish farms on the Pacific coast, he said.

“So I think we need to exercise caution, but I do think it is a time to celebrate.”