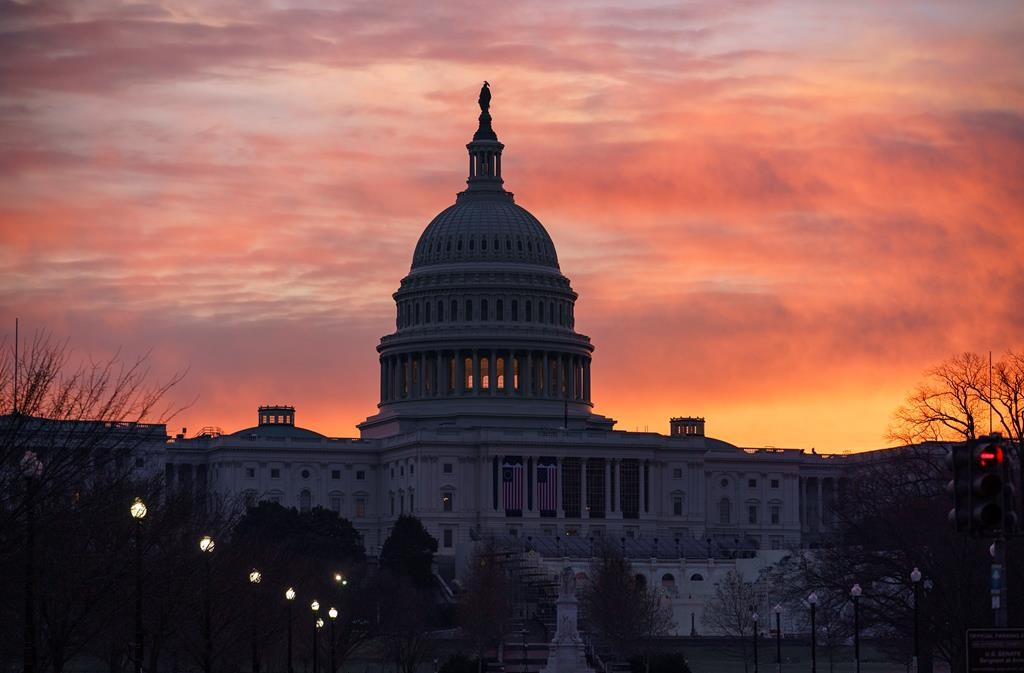 Dawn breaks at the Capitol in Washington, on Monday, Jan. 11, 2021. File photo by The Associated Press/J. Scott Applewhite
Previous story
Next story

With Joe Biden's inauguration just 10 days out, the U.S. capital battened down the hatches Monday as the chilling truth of the Capitol Hill incursion and the dire consequences for Donald Trump both came into sharper focus.

Democrats in the House of Representatives launched a procedural pincer movement against the president: a demand that his vice-president invoke the 25th Amendment, and an article of impeachment in the likely event he doesn't.

That single article, "Incitement of Insurrection," has so much support among House Democrats that Trump is all but certain to end the work week as the first president in American history to be impeached a second time.

In a fateful speech Wednesday to thousands of supporters gathered outside the White House, Trump "wilfully made statements that, in context, encouraged — and foreseeably resulted in — lawless action at the Capitol," it reads.

"Thus incited by President Trump, members of the crowd … unlawfully breached and vandalized the Capitol, injured and killed law enforcement personnel, menaced members of Congress, the vice-president and congressional personnel, and engaged in other violent, deadly, destructive and seditious acts."

It could come up for a vote as early as Wednesday, provided the House's other tactic — pressing Vice-President Mike Pence to mobilize cabinet members to use their constitutional powers to oust Trump — doesn't come to pass.

That resolution, which failed to win unanimous support when it was introduced, comes up for a vote Tuesday. Pence, reportedly dismayed at Trump's response to Wednesday's riot, has offered no public signal of his intentions.

Pence was on Capitol Hill and presiding over the process of certifying Biden's presidential election win when the chaos erupted shortly after the lunch hour Wednesday.

Outside, a motley horde of infuriated Trump supporters, convinced by the president's lies of a grand conspiracy to deny him a second term, overpowered a meagre police presence and forced their way into the building.

Five people died amid the mayhem, including Brian Sicknick, a Capitol police officer who was assaulted in the melee, and Ashli Babbitt, 35, an Air Force veteran who was shot by police as she tried to gain access to the House chamber.

'Incitement of insurrection': U.S. House begins push to get #Trump out of White House. #insurrection #US

Impeachment, which would disqualify Trump from again seeking public office if he were convicted in the Senate, could be the least of the president's problems.

In an interview with MSNBC, D.C. Attorney General Karl Racine said Trump and others involved in Wednesday's White House speeches are under investigation to determine if they should face charges for inciting a riot.

"The president has about nine more days of office and, of course, the investigation is going to go on much beyond those nine days," said Racine, noting that a sitting president can't be charged with a crime.

"It will be another legal question as to whether the president can be prosecuted after his term of office. I think the better weight of authority answers that question affirmatively."

Trump attorney Rudy Giuliani, whose relentless, febrile support for his biggest client has often veered toward the slapstick, was among Wednesday's speakers, calling for "trial by combat."

The New York State Bar Association said it was investigating whether to kick Giuliani off its membership list.

By Monday, the notion of a peaceful protest gone awry had given way to more sinister truths: that many more could have died, that the seat of U.S. democracy very nearly suffered a killing blow and that the danger was far from over.

Trump-friendly far-right social media chatter points to plans for a dramatic show of force Sunday: an "armed march" on Capitol Hill and state capitols across the country, as well as the so-called "Million Militia March" on inauguration day Jan. 20.

The National Guard, which already has about 6,000 soldiers in the capital, said it would bolster its ranks on the ground to at least 10,000 by Saturday, with as many as 15,000 possible by next week.

The National Park Service closed the Washington Monument, where thousands of Trump supporters gathered Wednesday for Trump's speech, for at least the next two weeks. Road closures and other restrictions are also likely.

"Groups involved in the Jan. 6, 2021, riots at the U.S. Capitol continue to threaten to disrupt the 59th presidential inauguration," the service said in a public alert.

Biden, who alongside running mate Kamala Harris will be sworn in during an outdoors ceremony at the Capitol, insisted Monday that he's not worried.

"I'm not afraid of taking the oath outside," he said.

"But I think it's critically important that there be a real, serious focus on holding those folks who engaged in sedition and threatened people's lives, defaced public property and caused great damage, that they be held accountable."

D.C. Mayor Muriel Bowser said the city has asked federal authorities to expand both the time period that they will be on an emergency footing and to expand the existing security perimeter.

"If I'm scared of anything, it's for our democracy," Bowser said. "We have very extreme factions in our country that are armed and dangerous."

"I have talked to officers who have done two tours in Iraq, and say that this was scarier to them than their time in combat," Contee said.

"I think that really just kind of speaks to the level of concern that we have as a city and as a government."

Both the Capitol and the White House are now surrounded by imposing two-metre unscalable fencing, reinforced by concrete barricades — the same fortifications that encircled the White House for much of the summer at the height of last year's Black Lives Matter protests.