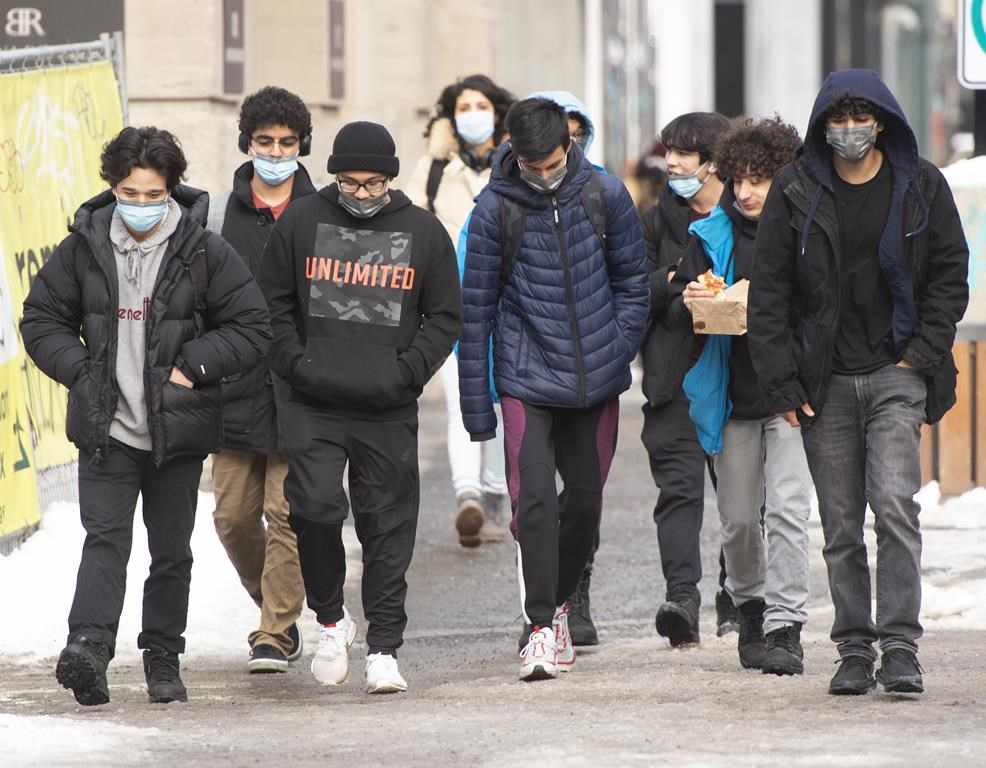 Some provincial authorities saw encouraging signs in the fight against COVID-19 on Monday, even as experts warned that it's too soon to draw conclusions from the data and provinces scrambled to deal with a looming shortage of Pfizer vaccines.

Officials in both Quebec and Manitoba noted that case numbers have dropped slightly in recent days and suggested that their populations' efforts to control the virus could be paying off.

"We’re definitely not out of the woods," he told a news conference as the province reported 118 cases. "We certainly still have a long way to go before we can return to normal."

Roussin said the province is looking at easing some restrictions in the coming days, but that any changes would be gradual.

Quebec reported 1,634 new COVID-19 cases, which included about 200 from the previous day that weren't noted because of a delay. The province had broken the 3,000-case mark in early January and has a seven-day rolling average of more than 1,900 cases a day.

Health Minister Christian Dube noted on Twitter that the Quebec City region in particular had seen a decline in the number of new infections recently, which he saw as a sign that "the sacrifices that we're asking of Quebecers are bearing fruit." However, he asked Quebecers to continue their efforts in order to reduce the number of hospitalizations, which rose Monday after three straight days of decline.

Universite de Montreal public health professor Benoit Masse said it will take another week or two to know whether the downward trend will be sustained and to gauge the impact of the recently imposed curfew. He said the province should know more by Feb. 8, when curfew restrictions are set to lift.

Ontario also reported its lowest number of COVID-19 cases since early January, with 2,578 new infections, but the province completed a little more than 40,000 tests Sunday, compared with more than 60,000 the day before.

She said there is increased transmission in the Interior and Northern health regions because of social gatherings, which are what caused a jump in infections in B.C.'s Lower Mainland a few months ago.

Some provinces see positive signs in #COVID19 fight, but hospitalizations a concern.

Nova Scotia also reported no new cases for the second time this month.

The news was less positive in New Brunswick, where the Edmundston region entered the province's highest pandemic-alert level, ushering in new restrictions on businesses in the region after a record-breaking number of new cases on Sunday. The province reported 26 new cases of COVID-19 on Monday after recording 36 the day before.

Provinces were also reviewing their vaccine programs to contend with a reduced supply of Pfizer-BioNTech doses after the company said last week it was cutting back on promised deliveries over the next month as it works to expand production.

Alberta Premier Jason Kenney said Monday that his province was pausing appointments for people to get their first dose of the COVID-19 vaccine due to the supply shortage.

"Even with a new shipment of Pfizer expected later this week, we won't have enough supply to continue with new first-dose appointments," he said, adding that the province had set aside vaccines for people who were due for their second doses, and those appointments would continue.

Manitoba stopped booking new appointments over the weekend, but health officials announced Monday that those bookings would resume, with room for about 4,000 new appointments this week and next.

Ontario also acknowledged it was working with a supply crunch that would see its next two shipments of Pfizer vaccine reduced by 20 per cent and 80 per cent respectively.

Ontario announced that a new hospital set to open in Vaughan, Ont., would be used to relieve a capacity crunch because of rising COVID-19 admissions. Elliott and Premier Doug Ford said the Cortellucci Vaughan Hospital would add 35 new critical care beds and 150 medical beds to the province's bed capacity.

Hospital capacity has been a concern in many provinces, with doctors in Ontario and Quebec being told to prepare for the possibility of implementing protocols to decide which patients get access to life-saving care in the case of extreme intensive care unit overcrowding.

Nationally, COVID-19 hospitalizations and deaths are still increasing, according to Canada's chief public health officer. Dr. Theresa Tam noted that hospitalizations tend to lag one or more weeks behind a surge in cases.

"These impacts affect everyone, as the health-care workforce and health system bear a heavy strain, important elective medical procedures are delayed or postponed, adding to pre-existing backlogs," she wrote in a statement.

She said an average of 4,705 COVID-19 patients a day were being treated in Canadian hospitals during the last seven days, including an average of 875 in ICUs.

— With files from Steve Lambert, Shawn Jeffords and Sidhartha Banerjee