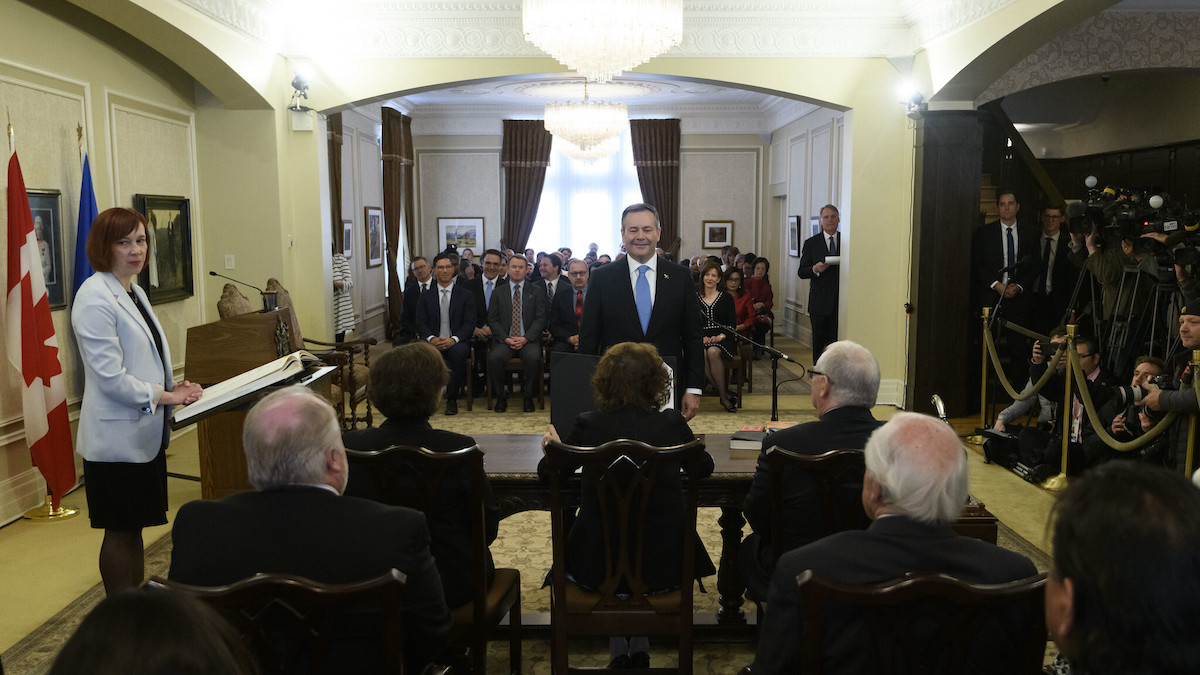 Premier Jason Kenney and cabinet are sworn in at Government House in Edmonton on Tuesday, April 30, 2019. Photo by Chris Schwarz/Alberta Government via Premier of Alberta / Flickr (CC BY-ND 2.0)
Previous story
Next story

When Joe Biden finally takes office on Jan. 20 as America’s 46th president, he’ll be faced with any number of difficult decisions. But the fate of the Keystone XL pipeline, which would carry more than 300 million barrels of Canadian oil to refineries in Texas every year, won’t be one of them.

According to a number of recent reports, cancelling the presidential permit that Donald Trump signed for the project is one of the Biden administration’s first priorities. And while that’s a reflection of the work of progressive activists within the Democratic Party, it’s also a byproduct of the ongoing incompetence coming from the government of Alberta — one that’s already invested more than a billion taxpayer dollars in the project.

In May 2019, Premier Jason Kenney launched what he called a “fight back” strategy — one that took aim at the alleged enemies of his province’s oil and gas industry. But nearly two years in, and at a cost of tens of millions of dollars, all he has to show for it is a bunch of self-inflicted black eyes.

The government’s so-called “war room,” which was supposed to tell the truth about Alberta’s oil industry, has instead embarrassed itself at every available opportunity, from the stolen logo that defined its launch to an ill-advised fight it tried to pick with the New York Times.

But that may all pale in comparison to the work of its inquiry into “the foreign funding of anti-energy campaigns,” whose report (which is both over-budget and overdue) is expected soon. Last week, the inquiry released the documents that will inform its report, and it reads like the bibliography for an undergraduate student’s C- political science paper. Ironically, it even includes a report commissioned by the inquiry from Energy In Depth, a pro-oil organization that was launched by the Independent Petroleum Association of America.

While the idea of an inquiry tasked with evaluating the impact of foreign funding choosing to commission a report from a foreign-funded organization is embarrassing, it gets far worse. Take the report from Barry Cooper, a political science professor at the University of Calgary who once helped funnel hundreds of thousands of dollars from the oil and gas industry through a fund at his university to a climate science-denying group called the Friends of Science. This is the group that infamously put up billboards in 2014 claiming the sun was the real cause of climate change.

Strangest of all was the tinfoil-laden report the inquiry commissioned from Tammy Nemeth, a U.K.-based historian who has written sporadically about energy issues over the last two decades. Among the other pearls of wisdom in her 107-page contribution (one that cost taxpayers more than $27,000) is the notion that climate change and other environmental issues are “being used as a vehicle to further an agenda that has at its core the replacement of the post-enlightenment western industrial capitalist way of life.” That agenda, which she refers to as the “Great Transformation,” is apparently an attempt to replace our capitalist society with “technocratic socialism.”

Nemeth claims this was actually attempted in 2008-09 and argues its agents — including, apparently, the federal government — are seizing on COVID-19 to try it again. Their end goal, she concludes, is “a centralized planned society that limits consumption through a so-called ‘circular economy,’ and is overseen by a technocracy that creates algorithms to ‘neutrally’ direct our existence augmented by Artificial Intelligence that monitors, evaluates, and judges where we go, how we get there, and what we are doing — just like it does in China.”

The inquiry’s “research” is rounded out by books that seem positively sedate by comparison, whether it’s Michael Shellenberger’s Apocalypse Never: Why Environmental Alarmism Hurts Us All or Bjorn Lomborg’s False Alarm: How Climate Change Panic Costs Us Trillions, Hurts the Poor, and Fails to Fix the Climate. But while these books might be popular with oil and gas executives and others who would prefer to slow-walk climate action where and how possible, they find no favour with actual climate scientists or subject-matter experts.

One of those experts is Martin Olszynski, a law professor at the University of Calgary who sought and was granted standing at the inquiry. He was unsparing in his assessment of these source materials. “By and large the commissioned reports are textbook examples of climate change denialism,” he wrote in his official submission. “All of them minimize or outright dismiss the reality and seriousness of climate change, even though none of their authors appear to be trained in climate science. These reports are replete with generalizations, speculation, conjecture, and even conspiracy.”

If President-elect Joe Biden cancels a key permit for the #KeystoneXL pipeline, Alberta will be a laughing stock, @maxfawcett writes. #ableg

The inquiry’s pitiful performance will surely further annoy those whose time it wasted and resources it consumed, but it’s Kenney’s own voters in Alberta who should be most upset by this debacle. His “fight back” strategy was never going to change the course of global markets or magically will pipelines into existence, mind you. But it didn’t have to make Alberta the laughing stock of the western world in the process.

The good, the bad and the ugly in Canada’s 2030 climate plan

Kenny is crying all the way

Kenny is crying all the way to the bank with his friends.

If throwing away a billion

If throwing away a billion dollars makes you a laughing stock in this world, then the Pentagon is running a constant "just for laughs", another billion every 12 hours.

A better comparison is Site C: $2B spent, and $2B will have to be spent again, even if it is cancelled. If not cancelled, another $10B, and it's very unlikely even half of that will ever be paid back, unless all the other electricity in western North America becomes very expensive and Site C can actually charge $80/MWh and get it.

Kenney is thus about one-quarter the laughingstock of BC.