Erin O’Toole says both John A. Macdonald and Louis Riel 'made good and bad choices' 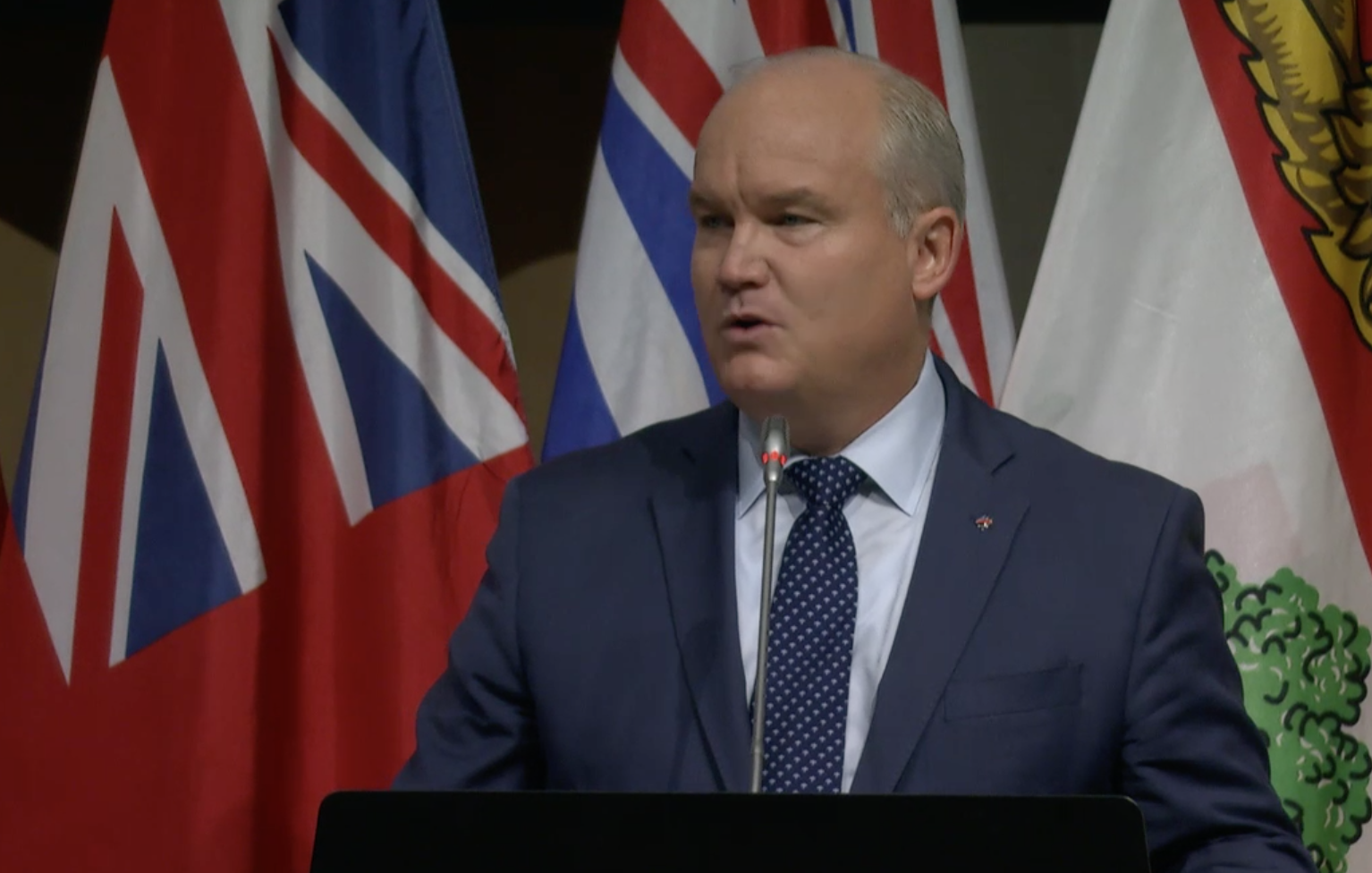 Statues of historical figures with contentious legacies should not be torn down, but should be accompanied by plaques explaining their context, Conservative Party of Canada Leader Erin O’Toole told his caucus Wednesday.

“Perhaps we should do that next to the Trudeau International Airport,” he said, referring to the Montreal airport named after Prime Minister Justin Trudeau’s father.

O’Toole made the comments at the party’s first meeting of MPs and senators since he became leader of the party, which took place in the Sir John A. Macdonald Building in Ottawa. In recent weeks, statues of Macdonald ⁠— Canada’s first prime minister, who introduced residential schools and a suite of other racist policies that killed Indigenous people, including starving them to make way for a westward railroad ⁠— have been targeted by activists protesting Canada’s colonial legacy.

In Victoria, B.C., city council voted last month to remove a statue of Macdonald. And in late August, protesters in Montreal tore down and decapitated a Macdonald statue.

In his remarks, O’Toole noted that Sen. Murray Sinclair, who co-chaired the Truth and Reconciliation Commission, had previously recommended putting context plaques next to statues of controversial historical figures.

O’Toole also compared debates over Macdonald’s legacy to that of Louis Riel, a Métis leader and the founder of Manitoba who later led several rebellions countering the Canadian government's encroachments on Métis land. Macdonald charged Riel with treason in 1885, and Riel was executed. For a long time, Riel was regarded as a traitor, but in recent decades, he has become known as a hero.

“Sir John A. Macdonald and Louis Riel were Canadians who made good and bad choices and the history books have rightfully scrutinized them each accordingly,” O’Toole said.

“They should continue to do so. But theirs is also a story of what happens when Canada is divided. When western alienation takes root and people feel ignored by a distant government in Ottawa who does not try to understand the fears and desires of thousands of people miles away. This is why we must never erase their stories by tearing them down.”

In a phone interview with Canada’s National Observer on Wednesday, Sinclair said controversies over Riel’s legacy, or even that of former prime minister Pierre Elliott Trudeau, are “not even anywhere in the same league” as those about Macdonald and systemic racism. Though Sinclair said he believes O’Toole’s approach to Indigenous rights is more progressive than previous Conservative leaders ⁠— last week, O’Toole promised a “serious approach” to reconciliation ⁠— he added that the proper context needs to be understood.

“There’s no situation where Riel, for example, participated in the same kind of crimes Macdonald participated in,” said Sen. Murray Sinclair, who led the Truth and Reconciliation Commission. #cdnpoli

Missing from O'Toole's remarks was a discussion of the elder Trudeau's record on Indigenous rights, Sinclair added: “None of them come with clean hands.”

Clarifying his past comments on how to handle statues of certain historical figures, Sinclair said he’s not against taking down monuments to people who have committed crimes against humanity, such as genocide.

“There are probably some historical figures we need to question ourselves about continuing to honour,” he said.

However, Sinclair said the issue is much more complicated when talking about someone like Macdonald, who made significant contributions to Canada and did so by harming Indigenous people. In those cases, he said, the historical figure shouldn’t be made to look like a hero, but should be accompanied by context and Indigenous historical figures.

“I don't think we should allow (a Macdonald statue) to stand alone saying, ‘Look, I am the great founder of this nation,’” Sinclair said.

“It should say, ‘I am the person who was the prime minister when this nation was created and expanded, and in order to do that, I had to eliminate all the Indigenous people who were in the way.’ And then see what people think of the statue.”

Sinclair also said he supports work to include more statues that recognize Indigenous heroes and history.

The Prime Minister's Office redirected a request for comment to the office of Heritage Minister Steven Guilbeault.

“If we truly desire an inclusive Canada, those of us who are privileged to sit at decision-making tables must step up, as allies, and do everything they can to make workplaces, communities, and public spaces safer,” Guilbeault's office said.

“That also means recognizing that systemic racism exists within our institutions, and existed throughout our history. Moving forward will require more active listening, concrete actions and better representation.”

So far, O'Toole has not answered questions about whether he believes there is systemic racism in Canada.

These comments by O'Toole

These comments by O'Toole simply confirm that he does not have the grasp of history, nor the capacity for political analysis, both of which are necessary to become Prime Minister.

Sounds like a typical conservative sound bite...........everything comes down to personal choice......both Riel and Macdonald made some good choices and some bad choices? Really?

Let me guess......Riel's bad choice was to oppose the policies of the guy who made the bad choice of starving native people on the prairies, by reneging on his promise to provide beef for the winter after having eliminated the buffalo???

Equating these two men, and their 'choices' sounds reminiscent of T-rumps comment that there were very good people on both sides, after white nationalists killed a peaceful protester in Charlotteville. History doesn't boil down to this pablum: good choices and bad choices for pities sake.

We starved the indigenous people of the plains, and when the Metis tried to resist, we killed them too. Time to stop whitewashing white imperialism.....it was and is a system........inside of which, choice becomes a bit of a joke.

Hmpff. Absolute parallel to Trump on KKK supporters and Civil Rights march anniversary observers. Except it also adds an element of "Ever it was thus." And presumably, evermore shall be ...?

Let's hope O'Toole continues with this kind of drivel. It will ensure him a choice place on the pile of unelected Conservative (and PC) Party leaders.