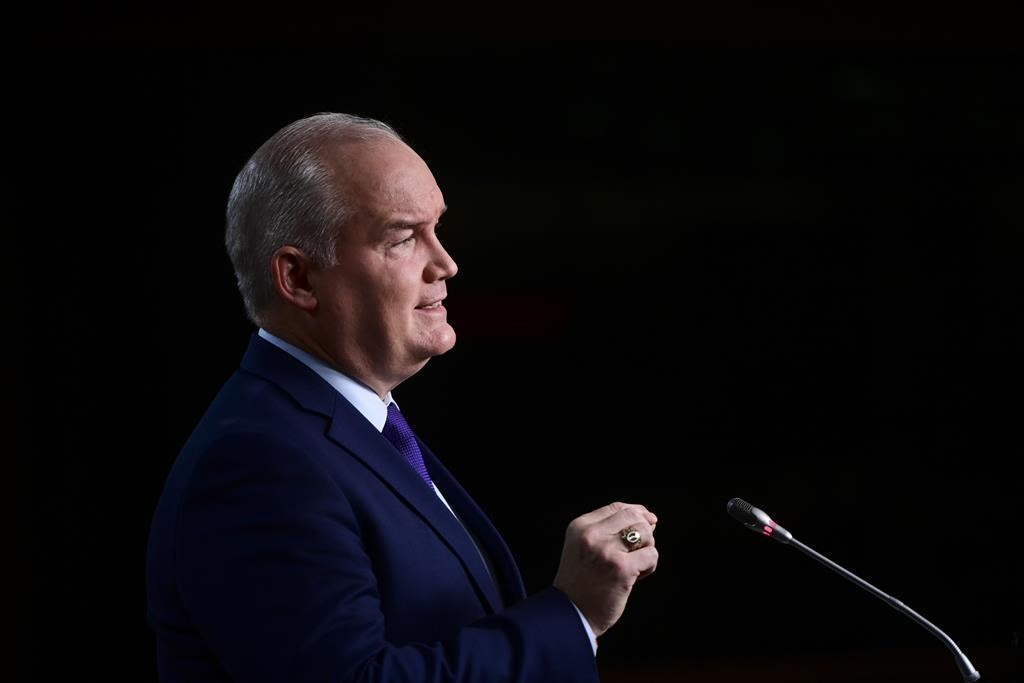 Federal Conservative Leader Erin O'Toole pushed back against attempts to link his party to Trump-style politics on Sunday, saying there is "no place for the far right" in the Tories while accusing the Liberals of divisive dirty tricks.

In a statement Sunday, O'Toole asserted his own views on such issues as abortion, gay rights and reconciliation with Indigenous people in Canada while insisting that his party is not beholden to right-wing extremists and hatemongers.

"The Conservatives are a moderate, pragmatic, mainstream party — as old as Confederation — that sits squarely in the centre of Canadian politics," O'Toole said.

"My singular focus is to get Canada's economy back on track as quickly as possible to create jobs and secure a strong future for all Canadians. There is no place for the far right in our party."

The unusual statement follows the riot on Capitol Hill, which U.S. President Donald Trump has been accused of inciting and which has since been held up as proof of the dangers posed by right-wing extremists to Western democracy.

It also comes on the heels of a Liberal Party fundraising letter sent to members last week that accused the Conservatives under O'Toole of "continuing a worrisome pattern of divisive politics and catering to the extreme right."

As one example, it cited the motto used by O'Toole's leadership campaign: "Take back Canada."

It also referenced a photo that has been circulating of Conservative deputy leader Candice Bergen wearing a hat with Trump's slogan, "Make America Great Again," and a since-deleted Tory website alleging the Liberals want to rig the next election.

O'Toole on Sunday condemned the Capitol Hill attack as "horrifying," and sought to distance himself and the Tories from Trumpism by touting his party's support for free and fair elections, the peaceful transfer of power and accountable government.

To that end, he lashed out at the Liberals, referencing Prime Minister Justin Trudeau's decision to prorogue Parliament last summer as hurting accountability, before turning the tables on the governing party and accusing them of using U.S.-style politics.

"If the Liberals want to label me as 'far right,' they are welcome to try," O'Toole said. "Canadians are smart and they will see this as an attempt to mislead people and import some of the fear and division we have witnessed in the United States."

Former Conservative strategist Tim Powers, who is now chairman of Summa Strategies, believes O'Toole's team saw a "gathering storm" and felt the need to act to prevent the Liberals from painting the Conservatives as beholden to Trumpism.

Such action was especially important ahead of what could be an extremely divisive week down in the U.S., where there are fears that Trump supporters and far-right actors will respond to Joe Biden's inauguration as president with violence.

Powers suggested it is also the latest act in O'Toole's effort to introduce himself to Canadians and redefine the Conservatives ahead of the next federal election, both of which have been made more difficult by COVID-19.

And when Conservatives in caucus make statements or otherwise act counter to his stated positions, Powers said O'Toole will need to "crush them and take them out" to prove his convictions.

Shuvaloy Majumdar, who served as a policy director in Stephen Harper's government, welcomed O'Toole's statement while also speaking of the threat that events in the U.S. could pose to the Tories in Canada — particularly if the Liberals try to link them.

O'Toole was accused during last year's Conservative leadership race of courting social conservatives who oppose abortion, among other issues. That raises questions about the degree to which he may anger the party's base by taking more progressive positions.

But Majumdar suggested many of the populist elements left the Tories for Maxime Bernier's People's Party of Canada and that O'Toole is seeking to appeal to more voters by taking a broader view on social issues while sticking to the party's core economic positions.

This report by The Canadian Press was first published Jan. 17, 2021.