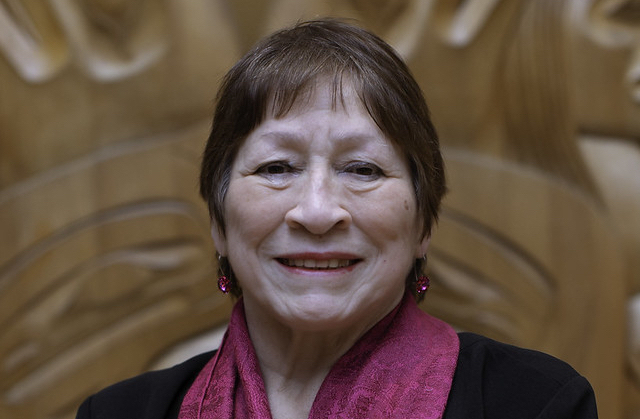 “We have the vision, we need the resources,” Blondin-Andrew said in this year's first Conversations event with Canada’s National Observer founder and editor-in-chief Linda Solomon Wood on Thursday evening. “We have a head start. We have the fundamental traditional knowledge, the relationship.”

Blondin-Andrew was the first Indigenous woman elected to the House of Commons and to serve in federal cabinet. She now works with the Indigenous Leadership Initiative (ILI) to develop Indigenous governance and stewardship of the land via programs that train Guardians and educate youth on land use planning. She explained at the event on Zoom that the initiative builds on traditions that have been around for generations, and which account for significant strides in conservation and climate policy.

[Ethel Blondin-Andrew of the Indigenous Leadership Initiative in conversation with Linda Solomon Wood on Jan. 21, 2021.]

Blondin-Andrew noted that 80 per cent of the world’s remaining biodiversity exists on Indigenous-managed land, which she said is no accident: Knowledge and stewardship practices passed down for generations have cultivated healthy, sustainable environments while extraction capitalism ravages the rest of the world. But much of this work is done on threadbare budgets, with few institutional resources. With climate change experts estimating we’re on a far-worse track than previously thought, and with one million species on the verge of extinction, successful Indigenous land management isn’t a suggestion. It’s an imperative.

What ILI and other Indigenous land leadership initiatives need, Blondin-Andrew said, is simple: Support for capacity-building.

“We have the fundamental traditional knowledge, we don’t have to build that,” she said. “We can share it with (the rest of Canada). But prime minister, we need that money.”

The Northwest Territories Dene have watched as out-of-town mining companies turn huge profits from their resources while contamination from the mines hurts local communities. Blondin-Andrew says they have long since earned some repayment. “The Canadian economy is predicated on natural resource extraction. We need not feel guilty if we get from the Canadian government because in Sahtu, we have given.”

For Blondin-Andrew, the urgency is both practical and personal. As far back as 1973, she has witnessed erosion issues while working in Tuktoyaktuk. Now, Canada’s northern territories are staring down the barrel of extreme weather events, but lack much of the infrastructure available in southern Canada to deal with the fallout. Roads, buildings, and shorelines across the Northwest Territories and its neighbours are devastated by retreating permafrost, and unpredictable winter weather means ice roads — critical for delivery of goods to northern communities — aren’t as reliable as they used to be. Animal migration routes have been disturbed by changing habitats and weather, disrupting food supplies in northern communities.

Last year’s caribou hunt was further complicated by COVID-19 restrictions, which necessitated more trips out onto the land to harvest meat. It’s a practice Blondin-Andrew has participated in since 1989, and it’s also how she met her husband. Now, via ILI, she passes that knowledge and techniques on to a new generation of youth. Last summer, said Blondin-Andrew, youth learned to make drums and mukluks from caribou hides while watching how to clean and dry moose meat.

These are critical components of self-determination and food sovereignty, both of which are threatened by the climate crisis and corporate encroachment. Teaching these skills to youth, who aren’t yet cynical or overwhelmed by the world’s ailments, is key. “We live in a world where a lot of very challenging things have happened,” said Blondin-Andrew. “But they have their whole future ahead of them, and they’re really good leaders. This is their present, as well as their future. If you give them the proper tools, they are just like magic.”

The only barrier to building these skills is cost. Even chartering a flight for a group of youth in the Northwest Territories can run as high as $25,000, said Blondin-Andrew. With more money, conservation programs can expand and intensify.

These efforts reflect tradition, but in the context of destructive extraction practices, they also exemplify innovation. Blondin-Andrew bristled at the assumption that Indigenous communities in Canada aren’t inventive. “They don’t understand how contemporary we are,” she said. “People always say, ‘Oh, it’s so cold up there.’ Well, we’re going through the same experiences on climate change as anywhere else in Canada.”

To succeed in mitigating the climate crisis, Blondin-Andrew said that technology alone won’t save Canadians. “Our greatest resource for dealing with climate change is our Indigenous knowledge, our Indigenous people.”

To survive, Indigenous police forces need 'black belts in how to be lean'

Meet the B.C. prof who's now a UNESCO Chair on Biocultural Diversity and Education

“Our greatest resource for

“Our greatest resource for dealing with climate change is our Indigenous knowledge, our Indigenous people.” While I hope this is true, it is a bit over the top and violates the effort to treat indigenous and western science with equal respect.