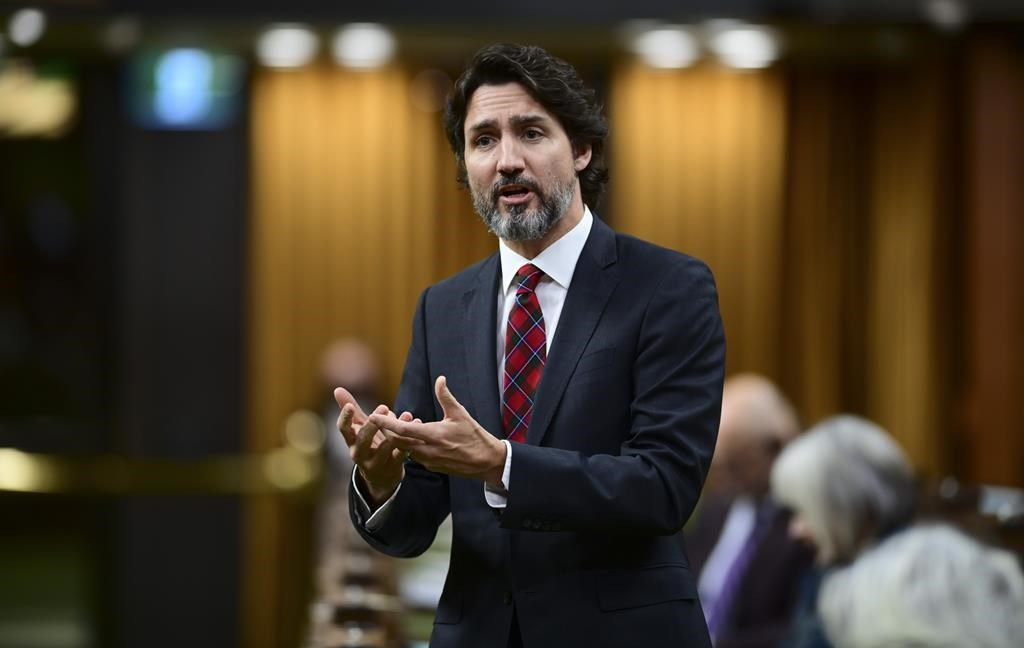 Prime Minister Justin Trudeau responds to a question during question period in the House of Commons on Parliament Hill in Ottawa on December 9, 2020. File photo by The Canadian Press/Sean Kilpatrick
Previous story
Next story

Members of Parliament return to the House of Commons on Monday following a month-long break that was anything but restful to again face the ramification of the COVID-19 pandemic as well as the threat of a possible election.

One of the first orders of business will be for MPs to decide how Parliament will continue to function during the COVID-19 pandemic, including whether to let parliamentarians continue attending remotely and whether to adopt a new voting app for those who do.

Those decisions come amid a much-changed situation as Ontario and Quebec remain under lockdown and stay-at-home orders following record-setting surges in new cases through much of the past month.

Government House Leader Pablo Rodriguez’s office on Sunday said the Liberals had held “constructive” discussions with the other parties, and there were signs that the measure would be adopted without much fuss.

Yet an agreement on the functioning of Parliament is likely to be the exception rather than the rule as opposition parties have indicated they plan to go hard at the government on a number of fronts — starting with its handling of the pandemic.

The Liberals are expected to table new legislation this week aimed at preventing people who have travelled outside the country on non-essential business from being able to access up to $1,000 in federal sick-leave benefits to pay for their 14-day quarantine after returning.

Yet delays in the rollout of COVID-19 vaccines are expected to dominate the agenda, with opposition parties indicating they plan to press the Liberals for answers on why Canada is facing delays in the delivery and distribution of shots — and what Ottawa is doing about it.

That includes the news last week that Canada would receive only a fraction of the Pfizer-BioNTech vaccinations originally promised over the next few weeks, though Prime Minister Justin Trudeau has said Pfizer has promised to deliver 4 million doses by the end of March.

Opposition parties have blamed the government for mishandling the rush to approve and buy vaccines, saying the Liberals have left Canada far behind other countries in terms of inoculating its citizens.

Both NDP House Leader Peter Julian and Conservative foreign affairs critic Michael Chong left the door open to parliamentary committee hearings into the government’s handling of the vaccination campaign — including what it is doing to get shots into arms faster.

“Why are other countries ahead?” Julian said. “That's the question that the government will have to respond to. And we believe that the government needs to very clearly spell out their plan to accelerate the vaccine distribution across the country.”

The government has said it is doing all it can to secure as many shots as possible, which includes signing contracts with multiple pharmaceutical companies to secure millions of doses over the past few months.

“I spend ... every day working to ensure that we have earlier and earlier doses in this country for Canadians given the importance of this vaccination effort,” Public Procurement Minister Anita Anand told the CBC last week.

The Conservatives are also expected to continue pushing the government to approve rapid tests for COVID-19 and increase federal assistance for small businesses, Chong added, noting that many are in danger of closing permanently during the second wave.

“Our singular focus is on the pandemic because that’s what Canadians expect of us,” Chong said.

The Bloc Quebecois has also called for more answers on vaccines while pushing for more support for seniors, while Julian indicated that the NDP will be pressing for the government to extend assistance to families and business past March while cracking down on profiteers.

Yet looming in the background will be the ever-present threat of a snap election. While Trudeau has insisted the Liberals don’t want to send Canadians to the polls, opposition parties have alleged that is exactly what the government hopes to happen.

Parliamentarians are also returning only days after Julie Payette resigned as governor general, which has raised questions about how she will be replaced — and how Trudeau selected her for the vice-regal job in the first place.

The Liberals are also expected to face fresh accusations of abandoning Western Canada for not raising more of a ruckus over U.S. President Joe Biden’s decision upon taking office last week to pull the plug on the Keystone XL pipeline.

Yet the Liberals aren’t the only ones jumping back into the fire as they return to Ottawa for the resumption of Parliament, as the Conservatives will be looking to turn the page on Derek Sloan’s ouster last week.

The decision to kick the former Conservative leadership candidate from caucus for accepting a donation from white supremacist Paul Fromm capped a week in which Tory Leader Erin O’Toole sought to distance his party from far-right elements.

That followed Liberal efforts to associate the Conservatives with the type of right-wing extremists who stormed Capitol Hill in Washington, D.C., earlier this month at the urging of outgoing president Donald Trump.

In an interview, O’Toole dismissed the idea that kicking Sloan from caucus has pitted him against one of the party's most powerful wings, social conservatives, whose support O'Toole courted during the leadership race last year in part by backing Sloan at the time.

This report by The Canadian Press was first published Jan. 24, 2021.

—With files from Stephanie Levitz.