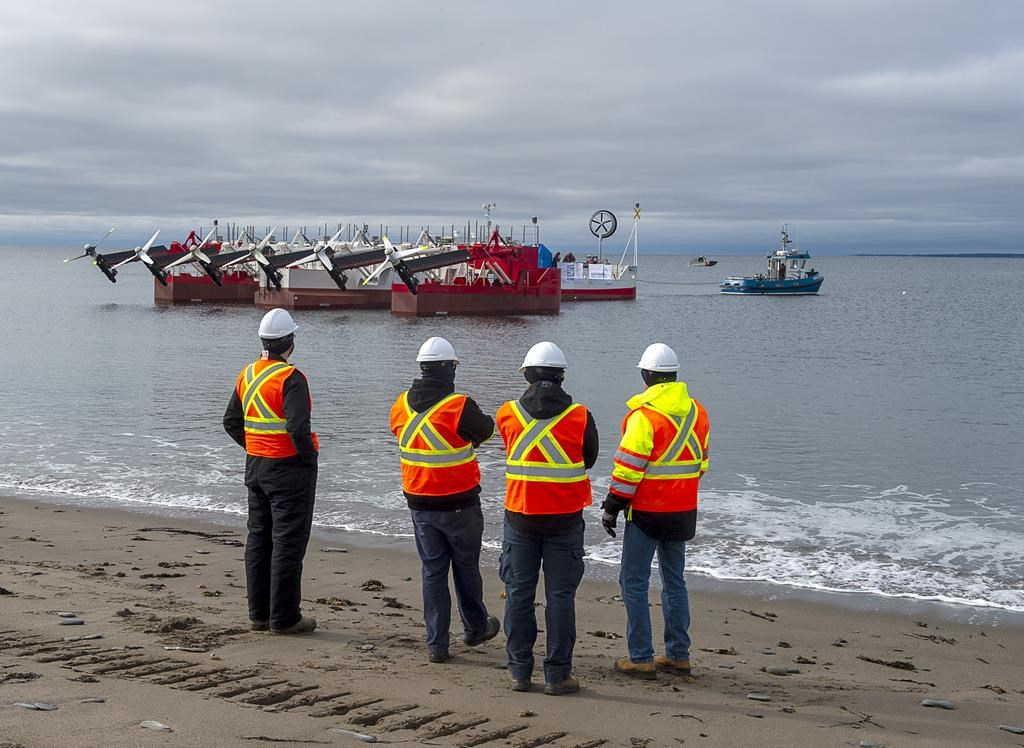 METEGHAN, N.S. — A large floating platform with six underwater turbines was launched Monday near the mouth of the Bay of Fundy, marking the latest high-tech bid to generate electricity by harnessing the bay's powerful tides.

Sustainable Marine Energy Canada started testing a smaller but similar catamaran-style platform near Nova Scotia's Brier Island in 2018. The bigger, second-generation platform is expected to undergo testing this winter and spring in the same area, known as Grand Passage.

It will be towed later this year to the bay's Minas Passage, near Cape Sharp, N.S., where it will be permanently installed in a test area that experiences the world's highest tides. The company describes the 420-kilowatt PLAT-I 6.40 platform as Canada's first floating tidal energy array. It is expected to produce 50 per cent more power than its predecessor.

The turbines look like inverted windmills and are designed to flip up for maintenance like a boat's outboard motor. The platform includes a turret that will allow it to align itself with the tidal flow. It was built by A.F. Theriault and Son Ltd. in Meteghan, N.S., the site of Monday's launch.

Sustainable Marine, whose Canadian office is located in Dartmouth, N.S., says its Pempa'q In-stream Tidal Energy Project will eventually include two other platforms, which will produce a total of nine megawatts of electricity — enough energy to supply 3,000 homes. Pempa'q is the Mi'kmaq word for "rise of the tide."

The federal government contributed $28.5 million to the project in November. Sustainable Marine's parent company is based in Edinburgh, Scotland. Its major shareholders include the Canadian government, Schottel GmbH of Germany and Scottish Enterprise, based in Glasgow.

"This tidal technology is the result of a tremendous international effort combining world-class scientific and engineering expertise from our German, Scottish and Canadian teams," Jason Hayman, CEO of Sustainable Marine Canada, said in a statement released Monday. "(It) is the culmination of a decade of research and development."

The Bay of Fundy has been the site for several tidal turbine demonstration projects over the years. In 2009, an in-stream prototype turbine that sat on the bottom of the Minas Passage was torn apart by the bay's powerful currents, which can move at 18 kilometres per hour.

In November 2016, a larger turbine built by Cape Sharp Tidal was hooked up to Nova Scotia's electric grid — a historic first — but the turbine was later removed for inspections and servicing in June 2017.

In July 2018, Cape Sharp Tidal successfully connected a massive, two megawatt in-stream tidal turbine to the grid. But the venture collapsed a day later when one of its owners, Dublin-based OpenHydro, was forced into bankruptcy proceedings.

A large floating platform with six underwater turbines was launched Monday near the mouth of the Bay of Fundy, marking the latest high-tech bid to generate electricity by harnessing the bay's powerful tides. #tidalpower #renewableenergy

In November 2018, court documents revealed the turbine had been damaged beyond repair only two months after it had been deployed on July 24, 2018. The inoperable turbine is still sitting on the floor of the bay.

— By Michael MacDonald in Halifax

Could tidal power be the missing piece to the green energy puzzle?