Could tidal power be the missing piece to the green energy puzzle? 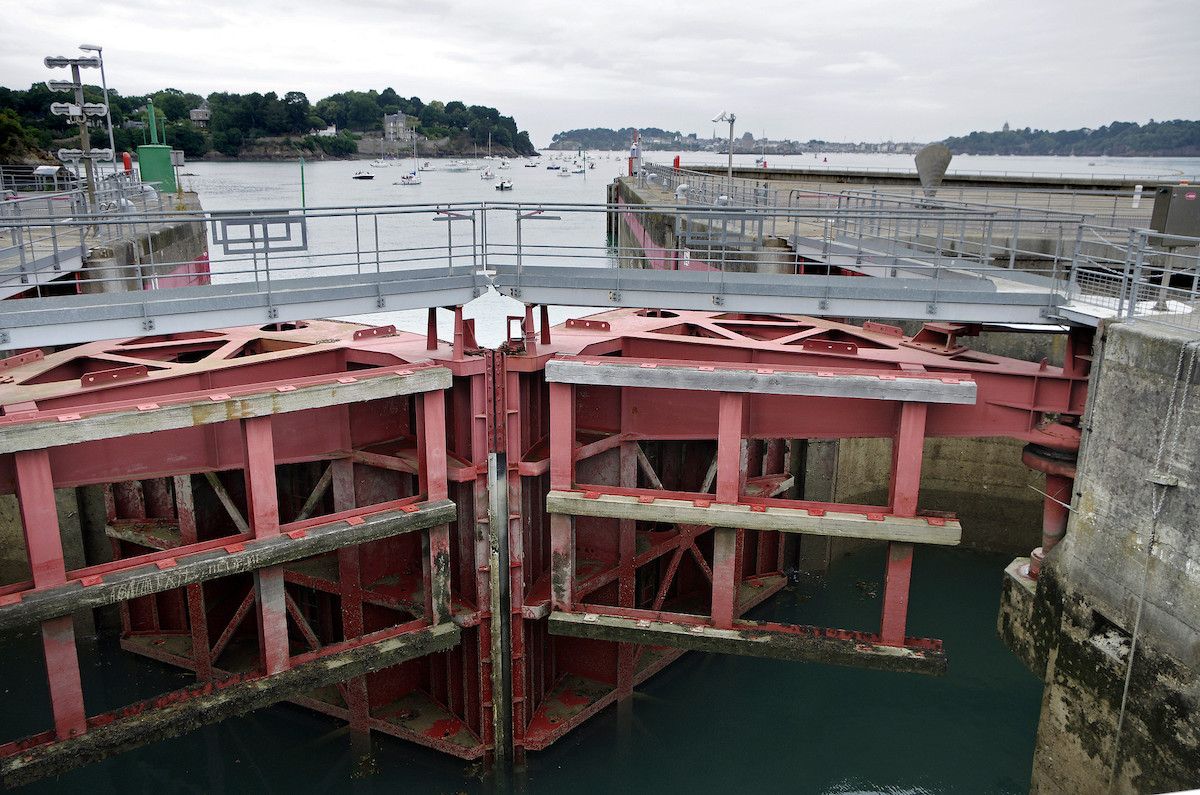 The Rance dam and tidal power plant in France on June 24, 2017. Photo by Daniel Jolivet/Flickr (CC BY 2.0)
Previous story
Next story

This article was originally published by The Huffington Post and appears here as part of Canada's National Observer's collaboration with Climate Desk.

NEW YORK ― On a foggy October afternoon, a strange vessel chugged slowly through the East River’s mist toward Roosevelt Island.

It looked almost like it was upside down: three 16-foot rotors, attached on a triangular metal base, sat motionless atop the deck of the rusted barge. They resembled propellers, but weren’t there to give the boat thrust. Instead, they’d be sent overboard, craned gingerly into the depths of the tidal flat that stretches from just east of Manhattan to the western shore of Queens.

All you can see from the surface is a set of six bobbing white buoys, but about 30 feet down the turbines are harvesting the kinetic energy of tides to produce electricity.

Verdant Energy’s East River project will generate just enough electricity to power 500 homes in the nation’s largest city, but it marks one of the first serious attempts in the United States to jump-start what could be a multibillion-dollar industry of tidal energy. More than a dozen states, including New York, have passed laws mandating zero-carbon electricity as a way to slow global warming.

In a dense metropolis like New York City, there’s little space to glaze entire fields with solar panels or erect towering forests of wind turbines. And with the city’s last nuclear power plant set to close next year, it’s unclear how it will meet that goal with a meager mishmash of rooftop panels, battery storage and as-yet-unbuilt offshore wind turbines.

That problem isn’t unique to New York, and it’s propelling a new wave of interest in an age-old concept of tidal energy. The National Renewable Energy Laboratory estimates that shifting tides and crashing waves could produce one-third of the United States’ electricity needs and roughly 10 per cent of the European Union’s.

Costly supply chains and competition from other renewables and fossil fuels have frustrated the industry’s development for years, leaving behind a wake of bankrupt startups and fruitless experiments. Still, its advocates hope that growing interest and support from the incoming Biden administration could change that ― and New York’s experiment is just the start.

A shift in the tides

Standing on the eastern shore of Roosevelt Island, a quiet sliver of land in the middle of the East River, John Banigan ― a soft-spoken former investment banker with neatly combed blond hair and a natural fit for boat shoes and a polo shirt ― seemed antsy. His glasses kept fogging with the breath rising from his face mask. But it was the fog on the water that had disrupted the Verdant chief executive’s carefully laid plans.

Solar and wind are energy powerhouses until the sky is dark or the air is still. An ancient source of energy — the tides — could soon offer a predictable alternative. #tidalenergy #greenenergy

That afternoon, the barge was supposed to arrive before 3 p.m., allowing a small armada of tugboats and cranes to hoist the turbines into the water and place them in a precise spot Verdant surveyed and measured for years leading up to this moment.

The foggy weather delayed the effort by hours. But this project required patience. The company ― which Banigan said has raised $46 million, half from Canadian, Irish and U.S. government grants, and half from private investors ― had already spent more than two decades designing turbines and assessing viable locations.

Now, at last, Banigan believes tidal power is poised for a breakthrough as countries scrambling to reduce climate-changing emissions look to generate an exponentially larger share of their electricity from zero-emissions sources. Tidal energy, he warned, doesn’t work everywhere. But until batteries become much smaller, cheaper and more efficient than they are today, producing power from the tides offers a dependable source of electricity to augment solar panels and wind turbines.

“You can’t predict when the sun’s going to shine and the wind’s going to blow,” Banigan said. “There are slack tides, but they’re predictable.”

Behind him, the four candy-cane smokestacks of the oil- and gas-burning Ravenswood Generating Station, one of New York’s dirtiest power plants, loomed as a visual reminder of what’s at stake in finding the right mix of clean alternatives to meet the city’s electricity needs.

In many ways, this nascent sector harks back to some of humanity’s earliest technologies. People have harnessed kinetic energy from the water as far back as the sixth century, when Irish monks rigged mills that used the flows from coastal inlets to grind grain. The United States built the world’s first hydroelectric dam in Appleton, Wis., in 1882, and dams remain the globe’s top source of renewable power.

But it wasn’t until 1966 that the energy from high and low tides started generating electricity. That year, French authorities in the province of Brittany erected the Rance Tidal Power Station. The 2,461-foot barrage of 24 turbines, stretched across an estuary of the Rance River, was the first tidal energy project in the world.

Today it remains the second-largest ever constructed, which may say as much about the relative compactness of tidal projects as it does about how few have been deployed.

Over the past decade, global investment in solar and wind energy has routinely topped $200 billion per year, according to data from the energy research firm BloombergNEF. But marine energy investment all but evaporated after brief peaks in 2007 and in 2011, when South Korea completed the Sihwa Lake Tidal Power Station, the world’s largest tidal array, roughly four decades after the project was first proposed.

But 2019 signalled a new shift, when the tidal power startup SIMEC Atlantis Energy generated enough electricity from a project off the northern coast of Scotland to power more than 2,200 homes. Unlike the projects in France and South Korea, which are part of a singular, dam-like structure that mimics the design of traditional hydroelectric plants, the Scottish project was designed as an array of underwater turbines, somewhat resembling a wind farm.

That July, SIMEC Atlantis broke a record for what the company identified as “the longest period of uninterrupted generation from a multi-megawatt tidal turbine array ever achieved.” Last August, the company told the Securities and Exchange Commission that it was exporting more than 30 gigawatt hours of electricity to the grid.

But in that same filing, the firm reported a 47 per cent increase in annual losses.

Costs remain high, and that looks unlikely to change until the tidal industry settles on a preferred equipment design. Arrays of rotors like those off Scotland or in the East River seem promising, and mimic the look and feel of windmills. But the size and shape of turbines, and how and whether to anchor them to the seafloor or float them on vessels, remain open questions.

The Biden administration has signalled its plans to increase federal research and support for clean energy technologies. But it’s unclear where marine energy might fall on that list of priorities.

Even more uncertain is the price batteries would need to reach to wipe out any demand for a costly but predictable new generating method. Batteries cost $1,100 per kilowatt-hour in 2010, and fell 87 per cent to $156 in 2019, according to BloombergNEF data released last year. By 2023, the consultancy forecast the average price to hit about $100 per kilowatt-hour.

Investment in the metals needed to make batteries, including cobalt and nickel, lag far behind growing battery demand, estimates from the energy research firm Wood Mackenzie indicate, suggesting there could be a bottleneck in the supply chain. But if battery prices continue to fall before tidal companies can garner enough public support and build an efficient supply chain, it could smother the industry.

“The benefit of predictable energy from tidal power becomes less powerful if solar-plus-battery or wind-plus-battery can provide the same predictability at a lower price,” McLean said. “That’s the challenge tidal energy faces: It’s got to get its costs down fast enough that it can continue to generate interest from policy-makers.”

The marine energy sector might draw more interest once technology to convert waves into power becomes viable. Unlike tidal resources, which are mainly concentrated in the northern hemisphere or near small islands, waves could be harvested on virtually any ocean coasts.

“It’s promising because wave energy opportunity is even larger than the tidal opportunity by roughly an order of magnitude, especially on the U.S. West Coast,” said Levi Kilcher, the head of the National Renewable Energy Laboratory’s ocean energy resource research. “It’s really a large ocean and a lot of energy there, from the West Coast to the Alaskan Coast.”

But in the last few years alone, roughly 90 designs for wave technology have been tested, from buoys that sit atop oceans to devices that sit on the seafloor and produce power as waves squish an attached bag.

“The technology is lagging behind tidal,” said Andrea Copping, a researcher at the Pacific Northwest National Laboratory. “It’s very hard to do, so it’s just not as advanced.”

By the end of next year, Verdant plans to remove the test turbines in the East River and begin work on commercial models twice the size of those rotors. Banigan said the company would like to set up a manufacturing site somewhere in New York, possibly in the city, where advocates are pushing to repurpose industrial waterfront property in Brooklyn and the Bronx for clean energy manufacturing, or upstate, which would put Verdant closer to the Canadian market.

But the first commercial projects the company has in the pipeline will be in northwest Wales, Banigan said.

However, Copping said the future of the industry looks brightest in East Asia.

“Between the Philippines and Indonesia, there are probably thousands and thousands of good sites and demand nearby if you run a cable from a tidal generator half a kilometer to shore,” she said. “Meanwhile Singapore is trying to set themselves up to be the supplier for all this technology in Asia. They really believe in it.”

Banigan agrees. Northern Europe, he said, is Verdant’s first stop. But in the mid-2020s, he expects the market in East Asia to bloom. By 2050, he predicted the tidal industry could generate $70 billion a year.

“We’re at something of a tipping point,” said Banigan, a former investment banker who joined the company after meeting a founder at a business event in Shanghai in 2011. “We see tremendous opportunity ahead.”