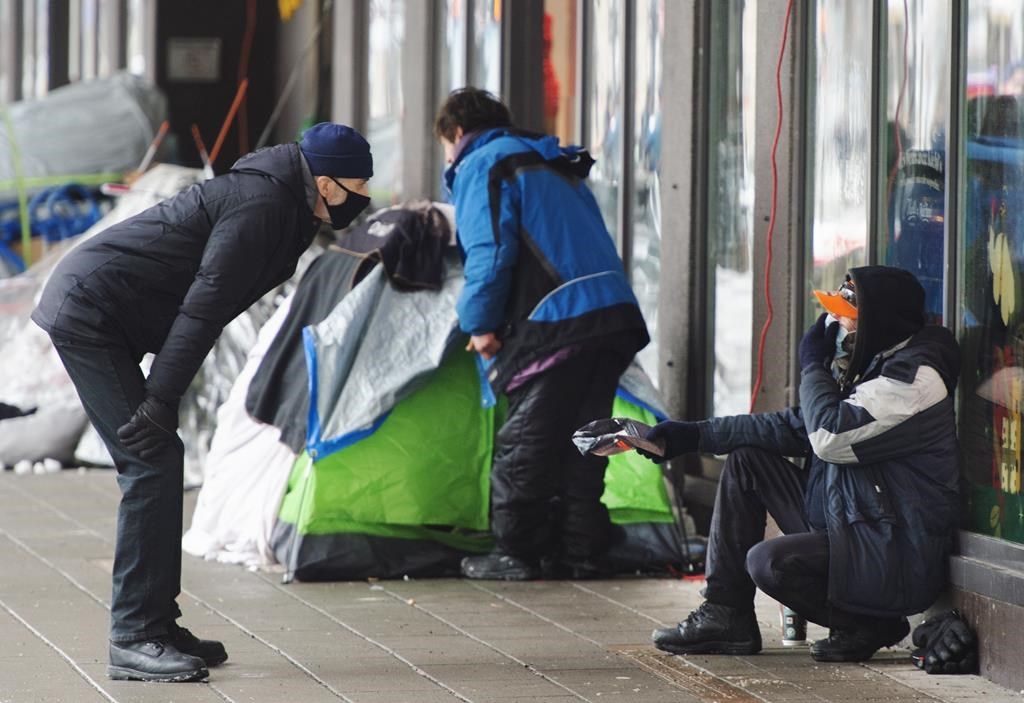 A man chats with a homeless person at a small tent city on Ste-Catherine Street on Jan. 27, 2021, in downtown Montreal. File photo by The Canadian Press/Ryan Remiorz
Previous story
Next story

Advocates say homeless people should get priority to COVID-19 vaccines given how at risk they are to the virus and how much more likely they are to get severely ill if infected.

"We as a society set the moral tone by who we provide supports for and who we prioritize," says a position statement released Wednesday by two national groups who work with street populations.

"It’s imperative that we include the most vulnerable who can benefit most from the protection afforded by COVID vaccination."

While vaccinations for the homeless population have begun in Montreal, Toronto and Vancouver, the groups are calling for an urgent, consistent Canada-wide effort.

Tim Richter, who heads the Canadian Alliance to End Homelessness, said congregate shelter settings and poorer overall health have been concerns since the beginning of the pandemic.

"On top of all of that, they can't follow the public health guidelines that are known to protect people. They can't go home and isolate, and hygiene is difficult, and access to health care is difficult," he said.

"The second wave of the pandemic is having a really serious and damaging impact on people experiencing homelessness and people working in the sector."

"One of the big things that we do worry about with this population group is that they're at higher risk of having bad outcomes from COVID because of underlying comorbidities."

Ghosh said many have stopped using services such as mental health and addiction supports, or even avoided shelters because they're afraid of catching COVID-19.

He acknowledged it may be tough to make sure homeless people show up for two vaccination appointments scheduled weeks apart.

"Developing a relationship of trust is key," he said. "It can't necessarily be public health, per se, who comes in and provides the shots, but rather nurses, physicians, providers who work with this group on a regular everyday basis — faces that the population is familiar with."

Shelter workers also need protection, the groups say. Richter said staffing has been an issue as employees experience burnout and fear of contracting the virus and spreading it to their families.

"It's happening in the shadows where people aren't watching or paying attention. We're raising the alarm to make sure that public health authorities are paying attention to the issue."