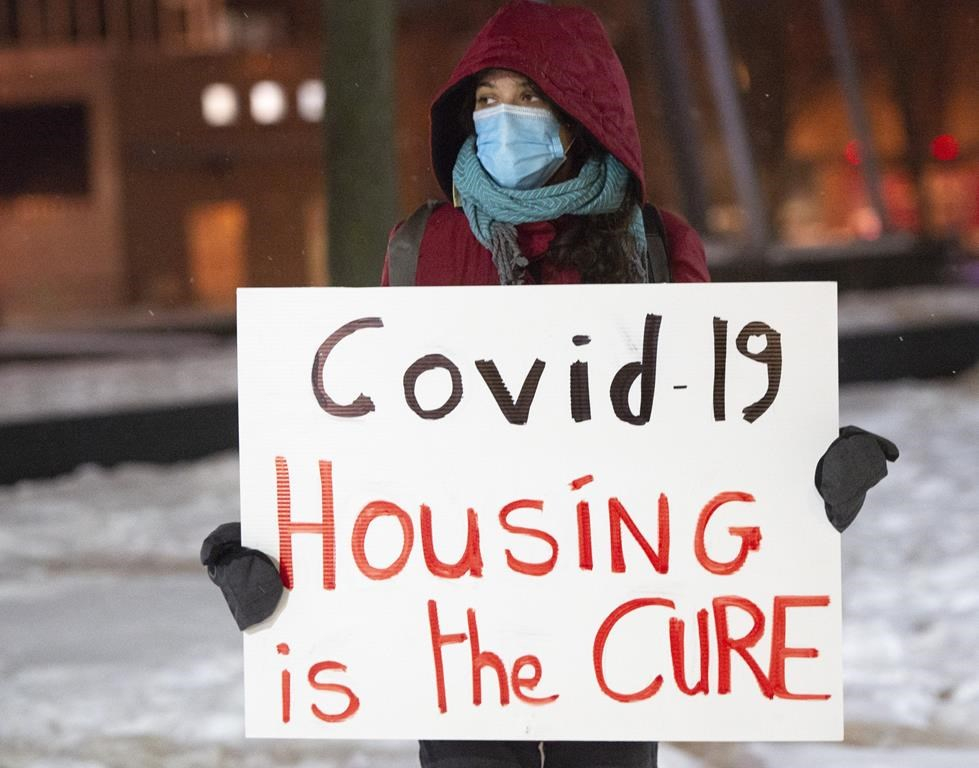 Advocates for the homeless hold a protest against the COVID-19 curfew on Monday, January 11, 2021 in Montreal. File photo by The Canadian Press/Ryan Remiorz
Previous story
Next story

The Quebec government said Wednesday it will not challenge a temporary court order granted Tuesday that exempts the homeless from a provincewide curfew imposed to limit the spread of COVID-19.

Junior health minister Lionel Carmant said in a tweet that the government will modify its curfew decree to ensure those without shelter will not be subject to the measure.

"We are aware of the ruling last night and do not intend to challenge it," he wrote. "Since the start of the curfew, our desire has been for people experiencing homelessness to be guided to the right resources and not to judicialize them."

Community workers and politicians at all levels of government had called on Premier Francois Legault to exempt the homeless from the curfew after a man was found dead this month in a portable toilet not far from a Montreal homeless shelter he frequented.

Legault had refused, saying police were showing discretion in dealing with the homeless and suggesting some people might pretend to be homeless in order to get around the 8 p.m. to 5 a.m. curfew.

But in response to a request filed Friday by a legal clinic representing the homeless, Quebec Superior Court Justice Chantal Masse ruled that although the curfew was in the public interest, its application imperilled the lives, safety and health of people experiencing homelessness.

The judge noted that the Crown did not challenge evidence presented in court showing tickets — which carry fines up to $6,000 — had already been given to homeless people for allegedly breaking the curfew.

The lawyers requesting the suspension had argued that applying the health order to people experiencing homelessness is "useless, arbitrary, disproportionate and cruel."

"It causes serious and irreparable prejudices that are not justified in the context of a free and democratic society," read the request signed by law firm Trudel Johnston and Lesperance.

The lead plaintiff, identified as S.A., is described in the court document as a 38-year-old man who has been diagnosed with alcoholism and schizophrenia. The filing says that S.A. received two $1,550 tickets for violating the curfew, which he cannot respect due to his homelessness and which he has no hope of paying.

The #Quebec government forced to exempt #homeless people from a provincewide #curfew imposed to limit the spread of #COVID19. #polqc

S.A had been asked to leave two shelters in the past two weeks because he had allegedly broken the rules, and he had been banned from three others allegedly because of his alcohol consumption, the filing says. It adds that the man feared catching COVID-19 in a shelter.

The lawyers representing the homeless legal clinic said the problems faced by S.A. are similar to those faced by other homeless people, who they said are often vulnerable and suffer from mental illness or substance abuse issues.

The lawyers noted that even when shelter beds are theoretically available, they are often reserved for certain categories of people, adding that few shelters will accept people who are intoxicated.

People with alcohol dependencies are faced with the "cruel choice" of either risking getting kicked out of shelters for drinking, or going outside to consume alcohol and risking a ticket for violating curfew — a situation that is "incompatible with the notion of human dignity," the filing said.

The court document also cited an intervention worker who said the curfew was leading some homeless people to hide from police at night, putting their safety at risk and making it harder to help them.

In the ruling, Masse said that while the curfew rules were undoubtedly adopted in the public interest given the COVID-19 pandemic, the "balance of inconveniences" favoured suspending the order for homeless people because of the serious questions raised regarding their health and safety.

The judge suspended the rule until the matter can be debated on its merits in court; however, Carmant indicated Tuesday that the government would not fight the ruling and would instead exempt the homeless from the health order.

Montreal Mayor Valerie Plante applauded the court decision, stating on Twitter that it will "facilitate the lives of people in situations of homelessness and the intervention workers in the field who support them."

Sam Watts, CEO of homeless service centre Welcome Hall Mission, said the organization has always maintained that "a curfew doesn't really apply to somebody who doesn't have a home to go to."

He said, however, that people shouldn't be encouraged to sleep on the street, adding that he hoped more resources will be directed toward helping people find permanent housing.

"The solution to the challenge of homelessness in 2021 is not a whole series of emergency measures, nor is it allowing people to stay on the street," he said in a phone interview. "The solution is to provide people with permanent supportive housing."