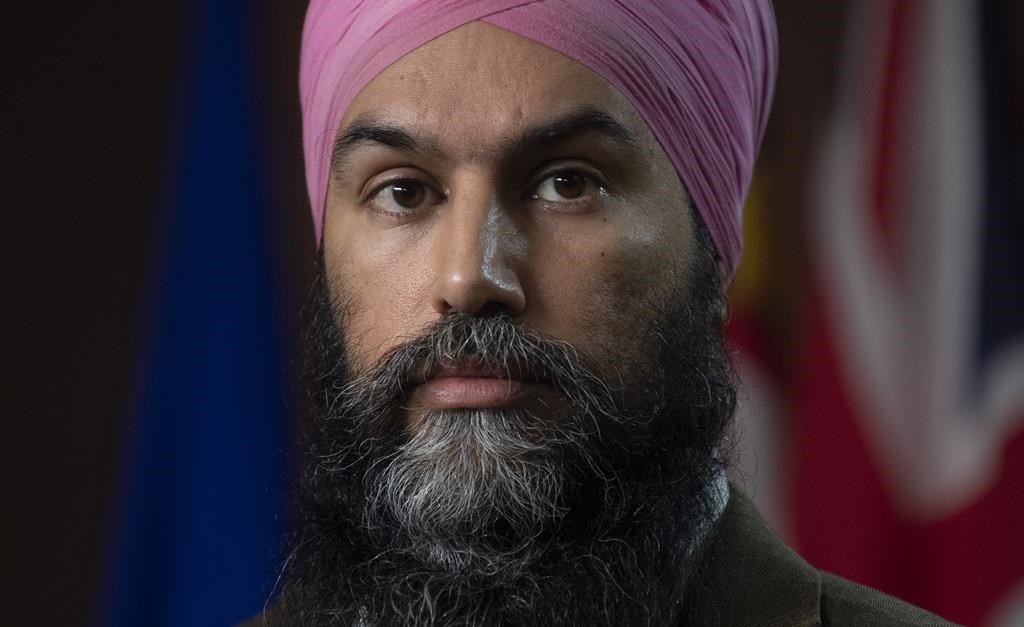 NDP Leader Jagmeet Singh is seen during a news conference on Parliament Hill in Ottawa, on Wednesday, February 3, 2021. File photo by The Canadian Press/Adrian Wyld
Previous story
Next story

The NDP is calling for the elimination of for-profit long-term care by 2030 in a multibillion-dollar plan presented as a potential election promise.

The proposal is the latest move in anticipation of a possible election campaign as parties vet candidates and rev up fundraising.

In a release Friday, Singh accuses the minority Liberal government of underfunding health care and protecting the profits of large companies and shareholders.

"Justin Trudeau made a promise to long-term care workers, residents, and their families to better fund long-term care and seniors care before he was prime minister. He broke his promise," Singh said.

The NDP's pre-emptive platform plank would see a national task force charged with crafting a plan to transition all for-profit care to a not-for-profit model in less than 10 years.

It would also follow through on New Democrats' calls to immediately transform Revera from a for-profit long-term care chain owned by a Crown pension fund into a publicly managed entity.

The company runs more than 500 seniors' residences in Canada, the United States and the United Kingdom. It is owned by the Public Sector Pension Investment Board, which bought it out in 2007.

Several studies over the past six months have found that for-profit care homes were likelier to see more extensive COVID-19 outbreaks and more deaths, exposing cracks in care models across the country.

Trudeau has reiterated that he respects provincial jurisdiction while seeking to protect seniors' rights through billions of dollars in extra support funds transferred to the provinces over the past year.

The #NDP is calling for the elimination of for-profit long-term care by 2030 in a multibillion-dollar plan presented as a potential #election promise. #CDNPoli

Ottawa asked the Canadian Red Cross to send workers into some care homes in Ontario facing outbreaks last fall, after sending in the military to help out in homes in Quebec and Ontario in the spring.

Health Canada has referred questions about ending Revera's for-profit model to the provinces, given their constitutional jurisdiction over health care.

Singh's pledge on long-term care builds on past demands to remove the profit element from the health-care system, and fits into a broader progressive push by the NDP since he took the party helm in 2017.

Singh has continued to call for a tax on the "ultra-rich," criticize how wage subsidies found their way into shareholder bank accounts and chip away at the Liberals for sluggish progress on national pharmacare and child-care programs.

He has also made a renewed push for voters under 35, advocating for cancelled interest payments on federal student loans, now part of the government’s fiscal update.

Under the new NDP proposal, funding for provinces and territories would be tied to principles of accessibility and public administration in the Canada Health Act, legislation that currently does not cover long-term care.

Nursing homes, unlike hospitals, are excluded from provincial and territorial public health systems, which critics say leads to under-training of workers, substandard facilities and — particularly in some for-profit homes — overcrowding.

More than a quarter of Canada's 2,039 long-term care homes are for-profit, according to the Canadian Institute for Health Information.

Recent outbreaks at several homes have set off alarm bells after the first wave saw more than 80 per cent of COVID-19 deaths occur in long-term care facilities.

As of Thursday, 66 of the 127 residents of the private Roberta Place care home in Barrie, Ont., who were infected with a highly contagious COVID-19 variant have died, according to a spokesperson.