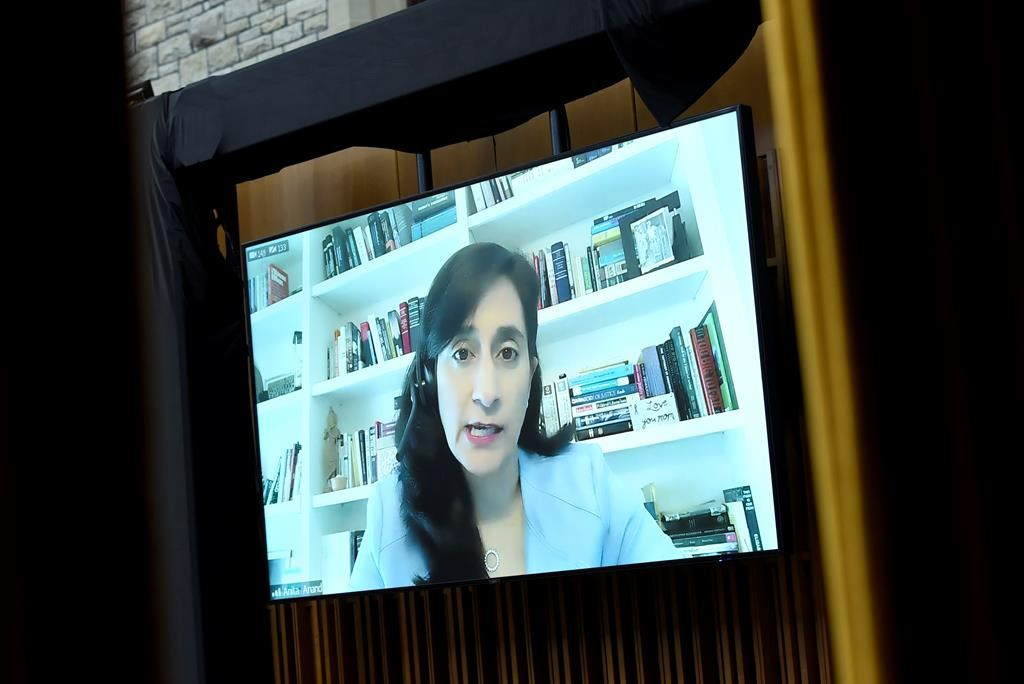 Minister of Public Services and Procurement Anita Anand is seen via videoconference as she speaks during question period in the House of Commons on Parliament Hill in Ottawa on Feb. 1, 2021. File photo by The Canadian Press/Justin Tang
Previous story
Next story

Every COVID-19 vaccine maker Canada signed a contract with last summer was asked if they could make the doses in Canada and all of them concluded they could not, Procurement Minister Anita Anand said Thursday.

Anand told the House of Commons industry committee that her department "proactively and repeatedly approached leading vaccine manufacturers" about the matter.

"We took this issue up with suppliers at every turn at the negotiating table to discern whether they would come to the table with this possibility of domestic biomanufacturing," Anand said.

"The manufacturers reviewed the identified assets here in Canada and concluded that biomanufacturing capacity in this country, at the time of contract, which was last August and September, was too limited to justify the investment of capital and expertise to start manufacturing in Canada."

Many of the COVID-19 vaccine makers sought partners to help produce their product. Moderna signed a 10-year exclusivity agreement with Swiss manufacturer Lonza to make its vaccine. AstraZeneca sought deals with multiple countries to produce its vaccine last summer and fall, including China, Brazil, Mexico, Australia, India and South Korea.

NDP MP Don Davies questioned why Canada isn't among them, and Anand said "I raised this issue personally with AstraZeneca last August."

A spokesman for AstraZeneca confirmed Anand's statements related to its vaccine, known as AZD1222.

"During the course of our discussions with the Canadian government, we reviewed in-country manufacturing capability and available capacity against the technical requirements for AZD1222," said Carlo Mastrangelo, AstraZeneca's director of corporate communications and sustainability.

"After discussion with the government and our technical experts, we agreed that the fastest and most effective option to ensure timely Canadian supply of AZD1222 was to leverage an existing supply chain that was already established and beginning the qualification process."

Prime Minister Justin Trudeau announced earlier this week Canada has a new contract with Maryland-based Novavax to eventually make doses of its vaccine at a new National Research Council facility going up in Montreal.

Every vaccine maker was asked to make their doses in Canada and all said no: Anand #CDNPoli #Covid19vaccine

Novavax CEO Stanley Erck said in a statement his company sees the deal with Canada as "an important step forward in our quest to deliver an urgently needed safe and effective vaccine.”

"The memorandum of understanding also includes a broader intention for the government of Canada and Novavax to work together to increase the company’s Canadian presence," he said.

But the new NRC building won't be finished until the summer and the new doses are not likely to start being pumped out until late fall at the earliest, long after Canada expects to import enough doses to vaccinate the entire population.

Vaccine manufacturing will be newly available at the Vaccine and Infectious Disease Organization at the University of Saskatchewan next year, and at Precision Nanosystems in British Columbia in 2023. But none of that helps Canada make doses of COVID-19 vaccines today, and the delays to Canada's shipments continue.

Delays getting Lonza's second and third production line up and running in Switzerland is blamed for Moderna's smaller deliveries this month. Moderna was to deliver 230,000 doses to Canada this week, but 180,000 arrived Thursday morning instead.

A spokeswoman for the company says it will still deliver two million doses total by the end of March. The company has delivered about half a million thus far, leaving 1.5 million for the only two shipments planned after this week before that deadline.

But Maj.-Gen. Dany Fortin, the military commander managing logistics of vaccine deliveries for the Public Health Agency of Canada, said Thursday Canada doesn't expect to get the 249,600 doses it was initially allocated for the Feb. 22 shipment either.

That comes after a month of smaller shipments from Pfizer-BioNTech, which was supposed to deliver more than 1.1 million doses between Jan. 18 and Feb. 14, and instead is delivering fewer than 340,000.

Provincial governments are expressing their exasperation with the vaccine supply shortages and the lack of clear information from Ottawa about what is coming and when.

"Unfortunately, we continue to get neither."

He said he would push Trudeau to do better during the weekly first ministers' phone call later Thursday.

After that call, a federal official said Trudeau assured premiers that despite the uncertainty over the supply of vaccines from week to week, Pfizer and Moderna continue to promise that Canada will receive six million doses by the end of March, as they contracted to do.

He also told premiers that the federal government is sharing all information it gets from the companies about the vaccine supply as soon as it receives it and is holding nothing back, according to the official, who wasn't authorized to speak publicly about the call.

Canada's reliance on foreign production of vaccines came to the forefront in the last week when Europe — where all of Canada's current vaccines are made — imposed export controls to protect their own supplies. Europe has assured Canada it won't affect Canada's shipments and Anand said so far that is true.

Canada's shipments from Pfizer and Moderna this week were allowed to go out, and Anand said next week's Pfizer shipment has been approved as well.

Canada is also going to get fewer than 500,000 doses of AstraZeneca's vaccine this winter, after believing just two days ago it could be more than twice that. Those doses are coming from the global vaccine initiative known as the COVAX Facility but can't be released until the World Health Organization approves AstraZeneca's vaccine.

Dr. Seth Berkley, the CEO of Gavi, The Vaccine Alliance, which is one of the COVAX's coordinators, said some doses are now not coming until the summer because of a delay getting that approval from WHO.

Canada should get about 475,000 doses before the end of March, and another 1.4 million by the end of June, pending approval of the AstraZeneca vaccine by WHO and Health Canada. Both are expected imminently.

Canada has also ordered 20 million doses from AstraZeneca directly, but Fortin was tight-lipped about when any of those doses will arrive.

"We are planning a number of contingencies," he said.