Salmon runs in B.C. are depleting — but some have the potential to come back, report shows 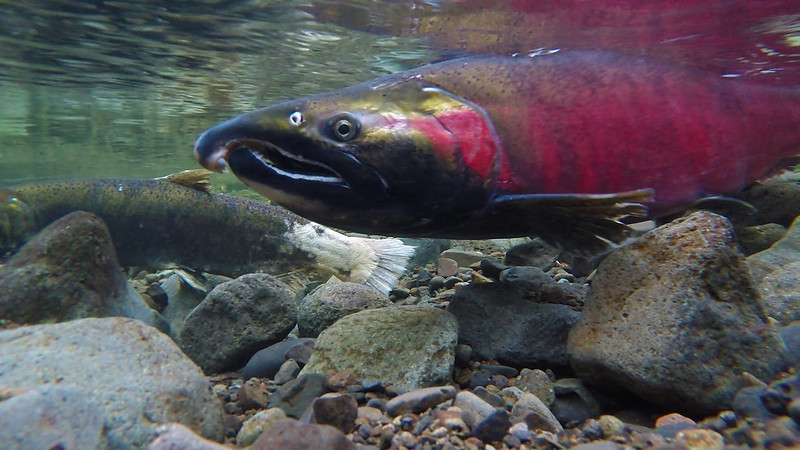 Pink, chum and coho populations could all increase, the study found, if given the opportunity. Photo courtesy of NPS Climate Change Response/Flickr
Previous story
Next story

Salmon runs across the province are tumbling, but a new report says some could bounce back — with some major changes.

The report, released by the Salmon Coast Field station, a field research base and charity near Echo Bay, analyzed more than 150 salmon populations in the Broughton Archipelago and inlets on northeast Vancouver Island and the central coast. They assessed fish in 92 river systems for abundance and 24 for resilience, which is the salmon's ability to come back from low numbers.

Pink, chum and coho populations could all increase, the study found, if given the opportunity. Chinook and sockeye salmon runs were also studied, but enough data wasn’t available to assess their resilience.

“(For) example, a population might be at very low abundance, but if every fish is producing four or five surviving offspring that ... return to the river, then you expect that in the absence of other factors ... that population will grow over time,” said Emma Atkinson, the report’s lead author and a PhD student doing research in the area.

Atkinson says some challenges facing salmon health — like climate change — can’t be controlled at a local level, but there are other actions that would help the fish thrive.

Fish farms — shown to have a negative impact on wild salmon populations — and fishing practices that can't differentiate between different runs make it difficult to know if you’re fishing the right population, she said.

“Right now, the region is in the middle of largely transitioning away from fish farms ... that's an example of a stressor that we're easing off on,” she said.

In terms of how long it would take the populations to rebuild, Atkinson said the report doesn’t go that far, but it could be used to further understand potential recovery paths.

“The framework that we used, you could use it to simulate forward. Kind of the same way they do for climate models, you could totally do that with salmon populations,” she said. “Simulate forward different conditions and look at the probability.”

Midori Nicolson, fisheries manager for the four tribes of the Musgamagw Dzawada’enuxw Nation, where the research station is located, as well as a councillor and member of the Dzawada'enuxw First Nation, said she’s happy to see the data brought to light — but the road to recovery remains long.

“The framework that we used, you could use it to simulate forward. Kind of the same way they do for climate models, you could totally do that with salmon populations,” says @eatkinso, the report’s lead author. #BCsalmon

“Resilience ... requires a lot of effort,” she said.

It’s not just fish farms causing harm to the populations, she said. Other sectors like industrial logging and commercial fishing are also having an impact.

“The challenging piece for us is that there is a chance for rebound scientifically of the systems, but it also means addressing what some of those stressors are,” she said. “Our fight to remove aquaculture was directly related to that ... the pieces that can be addressed, we should address and government should address (them.)”

“Rebuilding plans are required for depleted populations under the new federal Fisheries Act,” said Hill. “The report shows where we need to get going on that.”

“There’s so many canaries dead in the coal mine now, and things just still keep going ahead,” she said.

“And it's very, very challenging for us to try and plan into the future and watch these things happen.”