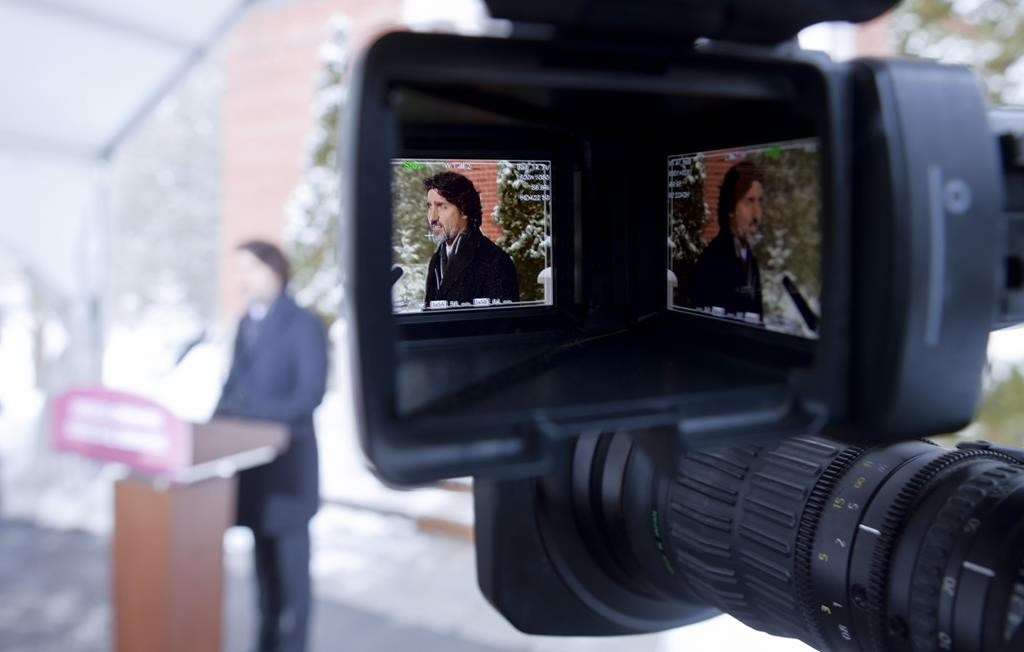 Two images of Prime Minister Justin Trudeau are seen in the viewfinder of a TV camera as he holds a news conference at Rideau Cottage in Ottawa on Friday, Feb. 5, 2021. File photo by The Canadian Press/Sean Kilpatrick
Previous story
Next story

The prime minister on Friday sought to quell angst over delays in vaccine delivery while British Columbia extended restrictions on gatherings to stem the spread of new, more transmissible variants of the COVID-19 virus.

Justin Trudeau said his government knew all along that short-term delays in vaccine shipments would be possible and planned accordingly.

"That's why there's a lot of anxiety and a lot of noise going on right now."

Shipments of the Pfizer-BioNTech vaccine, one of two approved in Canada, have slowed as a plant in Belgium is retooled to eventually churn out more doses. Canada is getting about one-fifth of previously planned shipments this week and next.

This week's shipment of the Moderna vaccine had 50,000 doses less than previously expected due to production delays in Switzerland. The company has signalled the next shipment in three weeks will also not be as big as initially planned.

But Trudeau said Canada is "very much on track" to receive a total of six million doses of vaccine by the end of March, as planned.

He reiterated that all Canadians who want to receive a vaccine will be able to do so by September.

"I speak almost every week with the CEOs of these vaccine companies and they have assured me that they will meet ... their contractual obligations," Trudeau said.

He sidestepped a question on whether vaccine manufacturers would be penalized if they failed to follow through on their commitments.

Ontario is to begin gradually reopening its economy next week, starting with regions that have fewer COVID-19 cases.

A senior government source told The Canadian Press that Premier Doug Ford is expected to announce on Monday that the government won't extend a state of emergency.

The source said regions will transition back to the government's colour-coded restrictions system over the next three weeks.

Toronto, Peel Region and York Region will be the last to transition back into the framework on the week of Feb. 22, but the source said any sudden increase in cases could cause the government to change its plans.

Also Friday, Trudeau said the Liberal government has approved a request for help from the Pauingassi First Nation in northern Manitoba. He said the military was to arrive by Saturday at the latest and stay until Wednesday.

Soldiers are to provide logistical support, transport goods and medical supplies, and do wellness checks.

Restrictions on gatherings that were to have expired at midnight have been extended indefinitely.

"We need to buy some time to understand if the positive things we are seeing are going to allow us to take away from the restrictions we have in place now," Henry said. "And we don't yet know that."

Alberta, which has a reopening plan tied largely to hospitalization numbers, is set to loosen public health orders for school sports, fitness centres and bars and restaurants on Monday. There were 475 people in hospital with COVID-19 on Friday and 10 new cases of variants were reported.

In Ottawa, Dr. Theresa Tam said active COVID-19 cases across Canada are 30 per cent lower than two weeks ago and deaths and hospitalizations are also trending down.

But she noted active cases are still double what they were at the peak of the pandemic's first wave last spring and new variants are cause for concern.

"As each day brings us more headway against COVID-19, let's hold fast to the measures we know are working," she said. "The past weeks of our collective sacrifices made a difference."

"Like many events and celebrations during COVID-19, we need to limit in-person contacts to our immediate household and, by connecting with others virtually, we can still enjoy the Super Bowl, but without the super-spreader."

Ontario reported 45 new deaths from COVID-19 on Friday and 1,670 additional infections, 125 of which weren't previously recorded.