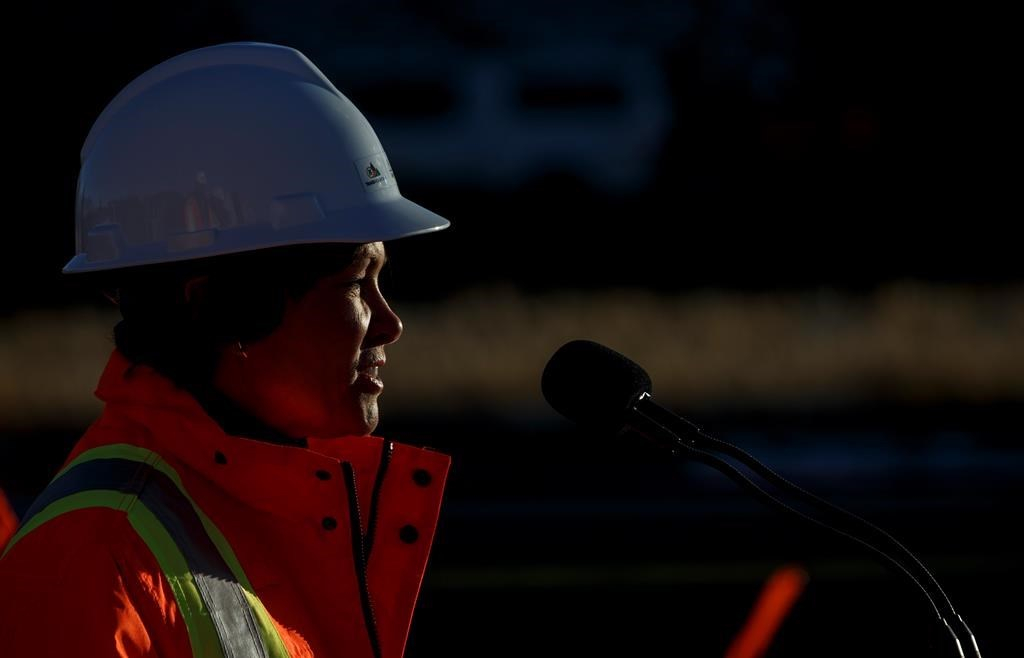 Sonya Savage, Alberta minister of energy, speaks during an event to mark the start of right-of-way construction for the Trans Mountain Expansion Project, in Acheson, Alta., Tuesday, Dec. 3, 2019. THE CANADIAN PRESS/Jason Franson
Previous story
Next story

EDMONTON — Public protest has persuaded the Alberta government to U-turn on a major section of its economic road map and reinstate a policy that has kept open-pit coal mines out of the Rocky Mountains for almost 45 years.

"We admit we didn't get this one right," Energy Minister Sonya Savage said Monday. "Albertans sure let us know that."

Savage announced that the United Conservative government will reinstate a policy on coal mining in the Rockies and their eastern slopes that was developed after years of public consultation by the Progressive Conservatives under Peter Lougheed in 1976.

That policy blocked surface coal mines in about 1.4 million hectares of much-loved wilderness that is home to endangered species and the headwaters of rivers depended on by many in southern Alberta. The policy was suddenly and quietly revoked last May, without public consultation, which stirred a slow undercurrent of protest that eventually built into a tidal wave.

As recently as last week, Premier Jason Kenney called the policy a "dead letter" and suggested that urbanites who didn't support rural jobs in coal mining were in part responsible for fuelling the controversy.

Savage said the province's energy regulator has been instructed not to permit mountaintop removal mines nor to issue any new exploration permits. No new leases are to be sold, although six companies with existing exploration permits will be allowed to complete their work.

Savage also promised to listen to public concerns before drafting a new policy on coal mining.

She said details on consultation are to be released in the coming weeks.

The decision was welcomed by Craig Snodgrass, mayor of High River, a town that had recently written a protest letter to the government over cancelling the policy.

"Albertans have spoken loud and clear and we have heard them," Energy Minister Sonya Savage said Monday after public protest persuaded the Alberta government to reinstate the province's 1976 coal policy. #ableg

But drilling and road-building continues under already-issued permits, he pointed out.

"There's damage that has occurred. We also had the ask of stopping all exploration."

Snodgrass said the message to the coal industry is plain.

"The minister has made this very clear about where this is headed," he said. "I'd be pretty nervous if I was a ... coal investor."

"They run this province like a backwater," said Notley, who suggested the UCP is undermining Alberta's credibility. "Sophisticated international investors are going to find other places to go.

The Coal Association of Canada, saying it wanted to study the announcement, declined to comment.

Notley emphasized that details on how consultation will go ahead will be crucial. "There must be new and current science. It must be shared publicly. There must be meaningful engagement with Indigenous people.

"And there must be multiple opportunities for the public and general stakeholders to be able to review the plan and the evidence and continue to engage."

But she said she fears the government still plans to go ahead with some kind of coal development in the Rockies.

"They should be holding public consultation first, and hearing if Albertans want coal or not on this landscape, before they start saying things like, 'We are committed to responsible coal development in the future.'

"There should not be any assumptions ... (about) new coal mines anywhere."

Opposition to the plan grew gradually until entertainers, including Alberta country singers Corb Lund and Paul Brandt, came out against it last month. Within days, petitions against the mines had grown to more than 100,000 signatures.

Other celebrities would follow, including singer Jann Arden and actor Amber Marshall, who stars in the TV series Heartland, its scenic backdrop partly filmed in the very landscape in question.

Small-town councils in the province's southwest almost all opposed the dramatic expansion of the industry, especially since they were not consulted. Ranchers feared coal mining's impact on their grazing lands and First Nations worried about effects on their traditional way of life.

At least eight communities had passed motions asking the province to back down.

Many worried the industry could contaminate the headwaters of rivers that all of southern Alberta depends on. Others pointed out the mines would encroach on habitat for endangered species from grizzly bears to cutthroat trout.

Morrison noted that the return of the coal policy is the second defeat for the government's environmental policies. December's announcement that no parks or recreation areas would be closed was also widely seen as a climbdown following vigorous public opposition.

"It's opened people's eyes to the insufficient protections for some of the most-loved areas in the province. People are now engaged in these issues and will continue to stay engaged."