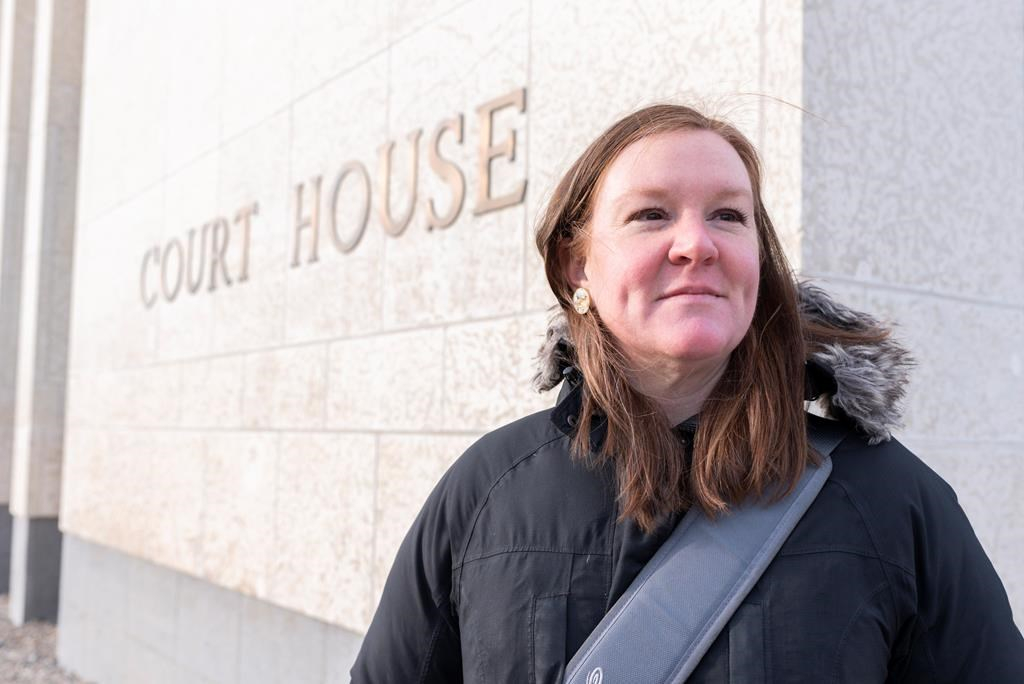 Emily Eaton, a professor in the department of geography and environmental science at the University of Regina, poses for a photo before entering the Court of Queen's Bench in Regina on Feb. 26, 2020. File photo by The Canadian Press/Michael Bell
Previous story
Next story

A judge has ruled that the University of Regina must provide information to one of its professors about who is funding research into the oil and gas industry.

"Ultimately, requiring that funding identity information be disclosed is in keeping with promoting transparency, openness and accountability in public institutions, such as the university," Justice Meghan McCreary wrote in her decision released Tuesday.

Emily Eaton, who teaches in the university's geography and environmental studies department, is researching the influence of the fossil fuel industry on education in Saskatchewan.

Under freedom-of-information legislation, she requested that the school disclose who is funding research related to oil and gas, coal, carbon capture and climate change, as well as which departments receive the money.

Eaton was denied her request and turned to the courts.

The university used a "discretionary class exemption" in the province's freedom-of-information laws that allowed it refuse to provide details of the academic research.

But McCreary ruled that the types of records Eaton requested did not fall within the exemption.

"This is because disclosing the amount of funding does not reveal the particulars of the research — the questions, methodology, results and conclusions of the research, itself," the judge wrote.

She said she agrees with the university that "there may be harms in disclosing funding identity information," but that it did not provide enough evidence that it would be the case in this situation.

"The university is entitled to consider whether disclosing funding identity information for any specific research may result in harm prohibited by other provisions of (the act)," she said.

A judge has ruled that the University of Regina must provide information to one of its professors about who is funding research into the oil and gas industry. #skpoli #UofRegina #OilAndGasIndustry

"However, I reiterate that the effect of my decision is that the university cannot rely on (this section of the act) as a blanket exemption to refuse to provide funding identity information."

She added that if the university does not find proper reasoning, "the research files in question must be disclosed."

"If this information is publicly available it provides community members with information that may be relevant to the context of the academic research, thereby providing the public with the ability to consider, analyze and debate the funding choices made by a public institution."

Eaton applauded McCreary's decision on Twitter, calling it a "positive precedent" for transparency of fossil fuel funding in university research.

Some big news! Represented by Dan LeBlanc, I won my court case against the @UofRegina for failing to disclose the source of oil and gas research funding! Should set a positive precedent for transparency of fossil fuel funding in uni research. Many thx to my supporters #skpoli pic.twitter.com/QBkAbt2MYj

In a statement late Tuesday, the University of Regina said the decision provides clarity on the application of the freedom-of-information exemption it used in the case, "which had not previously been considered by the court."

"Rather than allowing the university to complete its review for relevant records and awaiting the university’s formal response (and release of information), Dr. Eaton sought to challenge the application of this particular exemption provision," the emailed statement said.

The university noted that it was always willing to provide some of the information to Eaton and she is also free to directly request that each of her colleagues provide it.

"The university’s position has always been based on protecting our researchers and ensuring research integrity as required. Often, university researchers are conducting work that is unique, sensitive, controversial, confidential and potentially proprietary in nature," the statement said.

"Releasing information related to some research activities could put research at risk, and undermine competitiveness both for the university and its researchers."

— By Daniela Germano in Edmonton

When I looked at the

When I looked at the university's response down at the bottom of the article, it seemed so familiar. God, universities are so self-righteous even when they've been caught with their pants down. Don't get me wrong, I like working in a university, but damn, when it comes to acting like they're on the high moral ground and whoever just beat them soundly in a court case is a naughty child they're even worse than big corporations.