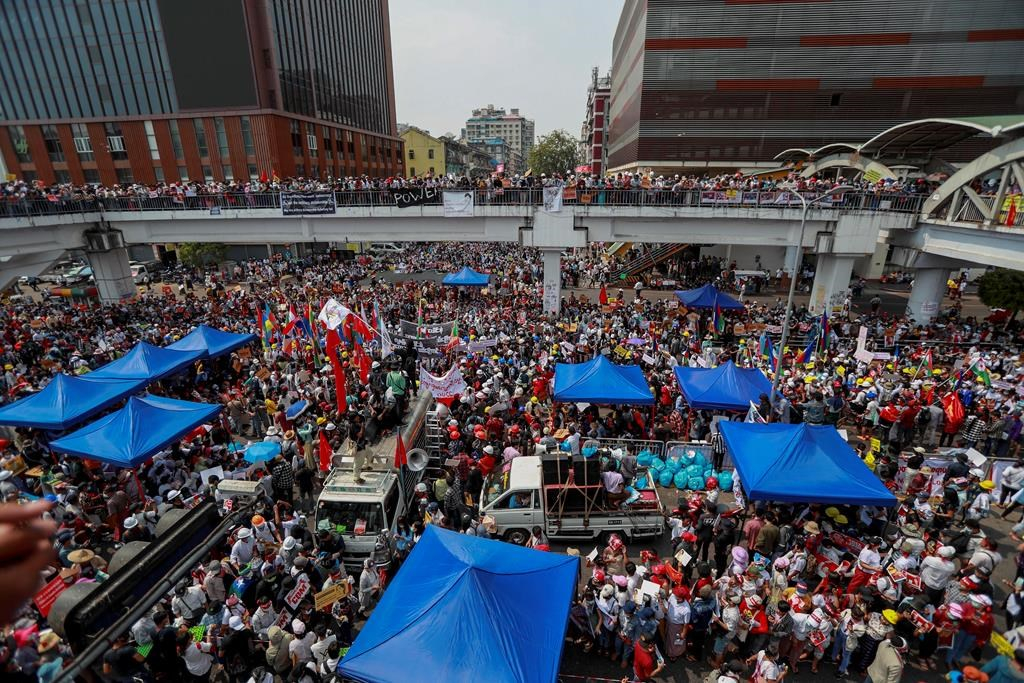 Demonstrators of different ethnic groups gather during a protest against the military coup in Yangon, Myanmar on Thursday, Feb. 18, 2021. Photo by The Canadian Press/AP
Previous story
Next story

OTTAWA — Canada and Britain have joined forces once again, this time to impose new sanctions on Myanmar after its military toppled its elected government in a coup.

Canada has imposed sanctions on nine members of the Myanmar military under the Special Economic Measures Act, which allows the government to essentially freeze their assets.

A trade embargo on arms and related material and related technical and financial assistance is also in force.

Britain also said it was announcing sanctions against three government officials for their violations of human rights during the crackdown.

Since then, the military has clamped down on protesters by using violence to break up demonstrations and blocking internet access.

"Canada stands with the people of Myanmar in their quest for democracy and human rights," Foreign Affairs Minister Marc Garneau said in a statement.

The new sanctions add to an effort Canada began in December 2007 when it imposed sanctions against individuals and entities "to respond to the gravity of the human-rights and humanitarian situation in Myanmar, which continues to threaten peace and security in the entire region," Global Affairs Canada said in a statement.

Thursday's announcement brought to 54 the number of people sanctioned by Canada.

"We work alongside our international partners who call for the restoration of the democratically elected government, and we echo their calls for the Myanmar military to release those who have been unjustly detained in the military takeover," Garneau said.

Britain's Foreign Minister Dominic Raab also condemned the coup and said, "We, alongside our international allies will hold the Myanmar military to account for their violations of human rights and pursue justice for the Myanmar people."

The sanctions are the latest in a series of joint actions between Canada and the United Kingdom on international security issues.

They have also levelled sanctions against the autocratic leaders of Belarus and called for a ceasefire in the fighting between Azerbaijan and Armenia.

"The U.K. is proud to stand alongside our Canadian partners in standing up for human rights and justice while indicating that there will be consequences to these violations," said a spokesman for the British High Commission to Canada.