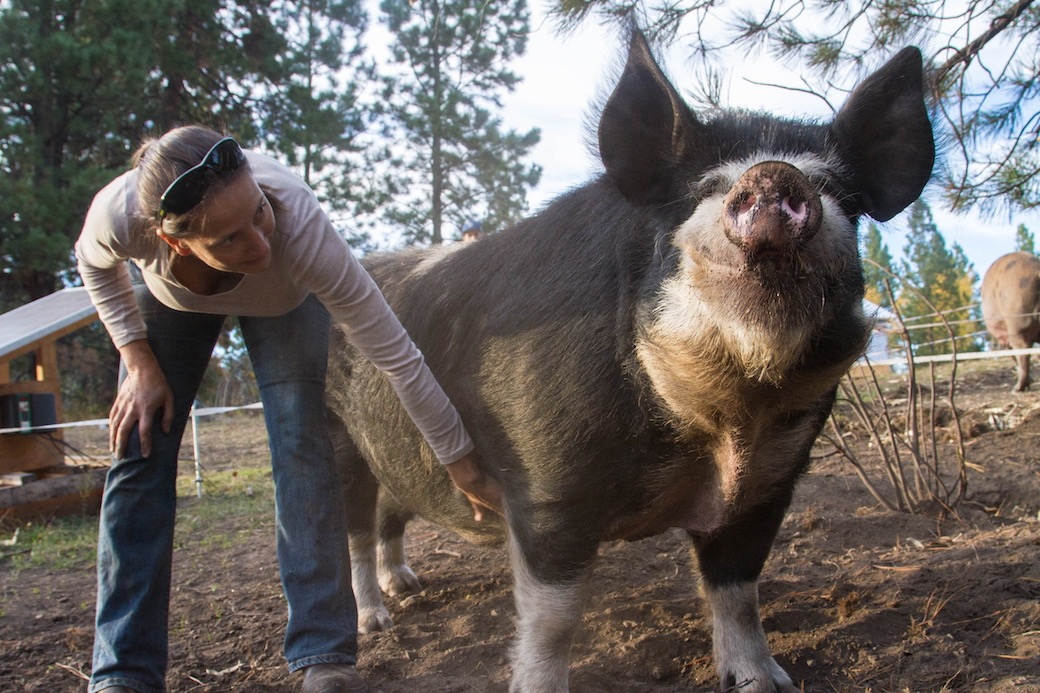 Julia Smith, a rancher and president of the Small-Scale Meat Producers Association, hasn't been able to book a date to slaughter her pigs before December. Photo by Tori Ball
Previous story
Next story

Julia Smith has a problem. Despite litters of fast-growing piglets and surging demand for her pork, she can’t find an abattoir that can slaughter them before December.

Demand for local meat has surged during the pandemic, leaving the province’s abattoirs booked months in advance and many small-scale producers struggling.

“I cannot book kill dates,” said the Merritt-based rancher and president of the Small-Scale Meat Producers Association, who has had to sell most of her piglets. They would have reached market size well before the winter and feeding dozens of pigs beyond the ideal age for slaughter isn’t financially sustainable, she explained. Selling them is the only option.

Last fall, B.C.'s Ministry of Agriculture released an intentions paper outlining proposed changes to the province’s abattoir laws to make local meat more available. No major changes have been announced since, leaving Smith out of luck.

At the time, Smith and other advocates pushed the province to expand small, rural abattoir eligibility criteria, increasing the province’s slaughter capacity. That hasn’t happened, but a recent announcement that the province will require “D” and “E” licence-holders to take a mandatory training program has Smith cautiously optimistic more change is coming.

B.C. currently has four types of abattoirs licences: “A” and “B” licence-holders are larger and can sell meat province-wide, while “D” and “E” licence-holders can slaughter on-farm and only sell to within the farm’s regional district.

The system was developed after the 2003 BSE (bovine spongiform encephalopathy) crisis pushed many regional abattoirs out of business, leaving many rural farmers unable to get their animals slaughtered. “D” and “E” licences were designed to help them slaughter and sell their meat more easily.

Skilled labour shortages and competition from Canada’s three main meat-packing facilities — they collectively process about 90 per cent of the country’s beef — have also hamstrung “A” and “B” class abattoirs, said Nova Woodbury, executive director of the BC Association of Abattoirs, in a September interview. When COVID-19 hit, these already busy abattoirs were quickly packed, she said, leaving ranchers like Smith with few options.

“I don’t particularly want to slaughter my own animals,” said Smith. “But I don’t see any alternative if I want to stay in business.”

That’s why she hopes the province’s announcement last week is part of more expansive and substantive regulatory changes.

“I don’t particularly want to slaughter my own animals,” said Julia Smith, president of the Small-Scale Meat Producers Association. “But I don’t see any alternative if I want to stay in business.”

“We’re big fans of anything that’s going to help us do (on-farm slaughter) better, but it’s moot if we don’t have the regulatory environment that allows us to actually scale our businesses to an economically viable level. We’re really hoping that this is happening in advance of announcements of some other changes that will actually bridge that gap,” she said.

Last December, the Ministry of Agriculture took oversight duties of “D” and “E” licence-holders back from the Ministry of Health, while earlier this month, the province announced plans to make a registry of land housing livestock mandatory. She hopes those changes are precursors to a more extensive overhaul.

“We recognize slaughter capacity is a long-standing issue,” the Ministry of Agriculture, Food, and Fisheries said in a statement. “(We) appreciate the feedback we received on our intentions paper for rural slaughter modernization, and we are currently working on next steps.”

The training program update announced last week is a part of that effort. The online course will focus on improved food safety, hygiene, facility and equipment design and sanitation, animal welfare, meat storage, and record-keeping requirements. It will also lay out standard operating procedures for farmers slaughtering their own animals, and licensees will be subject to on-farm inspections.

“It is good to hear that people performing on-farm slaughter have the opportunity to learn proper animal handling at slaughter and safe food practices during slaughter,” said Woodbury. The abattoir association has been critical of the “D” and “E” licences, arguing they undercut their business and undermine food safety.

Smith and other proponents of the licences say those concerns are overblown. When done properly and with oversight, on-farm slaughter is safe and an important tool in supporting local producers and securing rural food security.

“What we need is more licences and more opportunity, because currently, I don’t see any way a producer would want to invest in (slaughtering) infrastructure and spend … time training for a glorified hobby,” she said.

“We don’t see the point of increased training and increased regulation if we also don’t increase the opportunities for producers.”