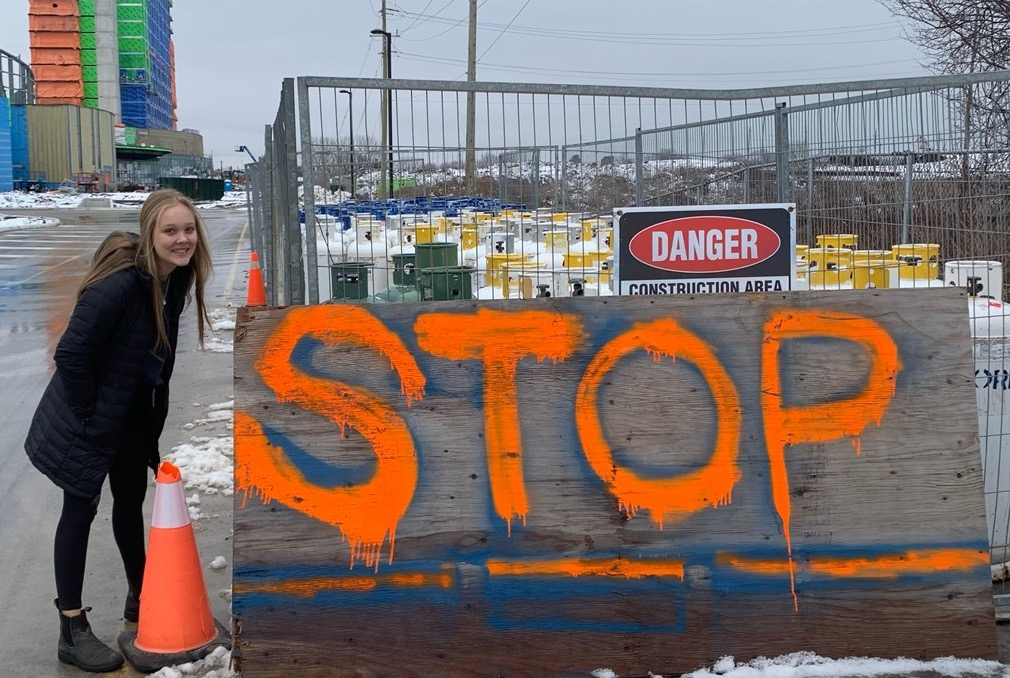 University student Ally Zaheer (pictured) and a former high school colleague are getting creative in a bid to stop wetland destruction in Pickering. Photo supplied by Ally Zaheer
Previous story
Next story

The hiking boots and winter boots, sneakers and sandals are piling up in the hundreds in Ally Zaheer’s family home in Pickering.

They’ve been dropped off on her porch by nearby Durham Region residents and others from Markham and across Toronto responding to a call to voice opposition to the fast-tracked destruction of ecologically significant wetlands nearby.

On Friday, the shoes will be placed outside city hall in Pickering, where the mayor and council have pushed to build a warehouse, part of a nearby casino development called Durham Live, over one of the last pieces of wetlands in the Greater Toronto Area.

“The City of Pickering is putting Pickering on the map as a leader for wetland destruction rather than a leader for sustainability,” said Zaheer, who in December joined the pandemic-proof protest push started by her former high school environment council co-member Devin Mathura.

The pair got the idea from a Guelph Fridays 4 Future climate strike that substituted a typical street action with a shoe strike last year, and will donate the shoes to nearby shelters once pandemic restrictions ease.

The municipality’s effort has been aided and abetted by the provincial government, just one among more than a dozen development projects in environmentally sensitive locations the Ford government has recently approved by overriding existing regulations and stripping power from local conservation authorities.

In some of the cases, including the Pickering one, the developers behind the projects have donated to the Progressive Conservatives and local politicians, a National Observer investigation has revealed.

The moves from a government that claims to be thinking about the everyday taxpayer are likely to be counterproductive in the long run, said Zaheer, who is now studying environmental engineering at the University of Guelph.

“From a taxpayer's perspective, with a wetland destroyed, that's going to be a lot of money needed to be put in for flood prevention as that new paved area has nowhere to run off into,” she said.

Sitting just inside Pickering’s boundary with the neighbouring town of Ajax (whose mayor is opposed), the wetland connects to the broader Duffins Creek watershed as it drains into Lake Ontario. Duffins Creek is in relatively good condition, but the watershed is under pressure as urban boundaries expand, the Toronto and Region Conservation Authority (TRCA) says.

“From a taxpayer's perspective, with a wetland destroyed, that's going to be a lot of money needed to be put in for flood prevention as that new paved area has nowhere to run off into,” says Ally Zaheer.

“The fact that there is a wetland in a very urbanized area is incredible,” Zaheer said. “It plays a large role in our watershed, it’s flood prevention, it's a habitat for migratory species as well as native flora and fauna.”


Zaheer and Mathura, who is studying environment, resources and sustainability at the University of Waterloo, met in December with local politicians, including Peter Bethlenfalvy, MPP for Pickering-Uxbridge and the government’s finance minister, to express their views.

They are now trying to up the pressure, with the shoe strike on Friday and by drafting an open letter they plan to send to Dave Ryan, the mayor of Pickering, as well as Premier Doug Ford, Bethlenfalvy and Steve Clark, the province’s municipal affairs minister.

“We are heartbroken that we have to write this letter,” they write. “We are speaking on behalf of the disappointed, confused, anxious and scared youth across Ontario.”

“Your lack of concern for our future has been demonstrated through your drive to destroy our environment, which you justify as an economic boost,” they say, noting that this particular zoning order sets a precedent for other developers to follow.

“Greed is the only explanation for the destruction of this wetland,” they add. “You are abusing your power and shutting out our voices!"