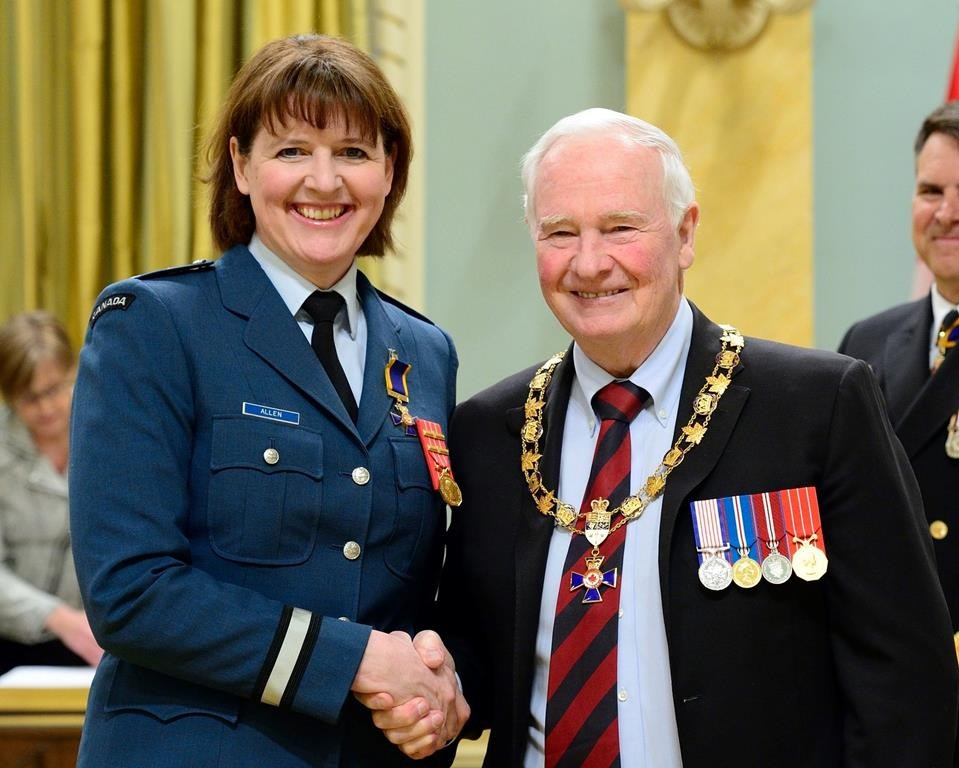 Frances Allen, then a brigadier-general, is inducted as an officer of the Order of Military Merit by Governor General David Johnston on March 6, 2017 in a handout photo. Handout photo by Facebook-Royal Canadian Air Force/Sgt. Johanie Mahieu
Previous story
Next story

Federal leaders were united Tuesday in welcoming Lt.-Gen. Frances Allen as Canada’s first female deputy military commander, but remained at odds over the Liberal government’s response to allegations of misconduct in the Canadian Armed Forces.

Prime Minister Justin Trudeau described Allen as a “strong woman” during a news conference, and said her appointment as vice-chief of the defence continued the Liberal government’s efforts to name women to senior positions across government.

Trudeau acknowledged that the reporting and accountability measures already in place for the military are not sufficient.

“We will continue to move forward on measures to ensure that we are not only giving those supports to people who come forward,” he said, “but also ensuring that we're putting in place independent mechanisms to put an end to these troubling allegations and this behaviour once and for all.”

Conservative Leader Erin O’Toole and NDP counterpart Jagmeet Singh praised the appointment of Allen, whose most recent position was as Canada’s top military official at NATO headquarters in Brussels.

“I have had the great privilege of serving with some outstanding women leaders during my time in the Canadian Armed Forces,” said O’Toole, who spent more than a decade in uniform.

“And we need more women and more under-represented groups at the command table at the table in Ottawa making the decisions for this important institution.”

Yet even as they lauded Allen’s appointment, O’Toole and Singh continued to stress the importance of continued action against sexual misconduct in the military while taking shots at the Liberal government’s handling of such incidents at the top.

“It has an incredible impact in terms of inspiring people and inspiring future generations, making people feel like they belong," Singh said of Allen's appointment.

“But the toxic culture won’t be fixed by one appointment. And the problem is that what happened recently cannot be ignored, the impact that has had on women in the military.”

Singh was alluding to recent allegations of misconduct against defence chief Admiral Art McDonald and his predecessor, Gen. Jonathan Vance, both of whom are being investigated by military police.

The details of the allegations against McDonald have not been revealed.

Global News has reported allegations that Vance had an ongoing relationship with a subordinate and sent a lewd email to a much more junior soldier in 2012, before he became defence chief.

Vance has not responded to The Canadian Press’s requests for comment and the allegations against him and McDonald have not been independently verified. But Global says he has denied any wrongdoing.

O'Toole was a cabinet minister in the Conservative government that appointed Vance as chief of defence staff in 2015, but said Tuesday he wasn't involved in that decision.

The allegations against Vance and McDonald have not only resulted in significant turmoil at the top of the military’s hierarchy, but also sparked a political battle over how much the Liberal government knew or didn't about them.

It has also prompted mounting calls from opposition parties and others for the Liberals to set up a truly independent body to investigate incidents of sexual misconduct in the military.

"And so far, I've seen the Liberals more worried about avoiding responsibility than showing that our Canadian Armed Forces needs to be an institution that is that is preserved and respected."

The Canadian Forces National Investigation Service is also independent, but some experts expressed concern about its ability to investigate sex crimes in the military even before the allegations against Vance and McDonald were raised.

Asked about the government's plans, Defence Minister Harjit Sajjan’s spokesman Todd Lane would only say that “everything is on the table.”

The seventh vice-chief of the defence staff in less than five years, Allen takes over from Lt.-Gen. Mike Rouleau, who only moved into the position last July and will now become a senior adviser to the defence chief on future capabilities.

Rouleau was also passed over for acting chief of the defence staff last month after McDonald temporarily stepped aside.

Lt.-Gen. Wayne Eyre, who announced Allen’s promotion as part of a longer list of promotions and retirements across the military on Tuesday morning, is currently acting defence chief.

All three were in the running to succeed Vance as defence chief, before McDonald was tapped.

The vice-chief is responsible for much of the day-to-day financial oversight and management of the Canadian Armed Forces, which includes leading efforts to change the military’s culture when it comes to sexual misconduct.

Defence analyst David Perry of the Canadian Global Affairs Institute noted Allen was deputy to a previous vice-chief of the defence staff, which he hoped would bring some stability to the office after years of turmoil.

That started with vice-admiral Mark Norman’s suspension in January 2017 after less than a year in the job, which led to a string of acting and permanent vice-chiefs.

“The VCDS position is really critical,” Perry said. “The degree of turnover we've had in the last few years has just been crippling.”

—With files from Christopher Reynolds