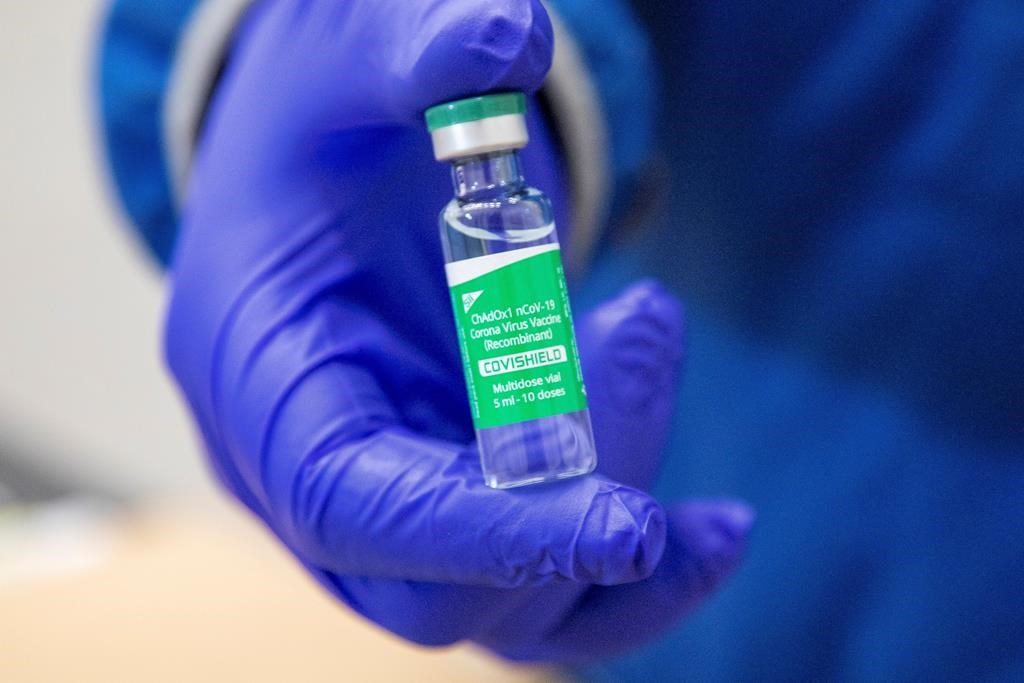 A vial of some of the first 500,000 of the two million AstraZeneca COVID-19 vaccine secured by Canada. Photo by:The Canadian Press/Carlos Osorio
Previous story
Next story

OTTAWA — Canadian health authorities are keeping a watchful eye on European investigations of the Oxford-AstraZeneca vaccine after reports of blood clots following inoculations, but say there is no evidence they were caused by the vaccine.

At least nine European countries hit pause on their use of AstraZeneca's doses — some entirely, and others only on specific batches — pending further investigation of blood clots, though none suggested there is a link between the clots and getting the vaccine.

Canada's first 500,000 doses of AstraZeneca are being put to use just this week, and officials in several provinces said Thursday they don't intend to stop the rollout.

“At this time, we have no information to suggest that this vaccine poses more risks than any other," said Dr. Horacio Arruda, director of public health in Quebec.

Carlo Mastrangelo, the head of corporate affairs, communications and sustainability at AstraZeneca Canada, said the company has completed a new safety review of 10 million patients who received the vaccine. He said it uncovered "no evidence of an increased risk of pulmonary embolism or deep vein thrombosis in any defined age group, gender, batch or in any particular country" with its COVID-19 vaccine.

"In fact, the observed number of these types of events are significantly lower in those vaccinated than what would be expected among the general population," said Mastrangelo.

Dr. Zain Chagla, an infectious disease doctor at St. Joseph's Hospital in Hamilton, said he has been inundated with calls from family doctors who are supposed to start inoculating patients this weekend, wondering if there was reason to be concerned.

Chagla said he will give the vaccine to patients this weekend as planned, because he trusts that Health Canada, which is constantly monitoring safety reports, would step in if there was any concern.

"Health Canada, they are working 24-7," he said. "Their role is if there's anything that goes on, you know that they essentially put a halt to it."

Health authorities in Denmark, which halted AstraZeneca vaccinations Thursday after an undisclosed number of blood clots were reported, and one patient died, said they stopped using the vaccine to be extra cautious, not because there was an expected connection.

The European Medicines Agency is probing the issue itself but says 30 blood clots in more than five million patients who received the vaccine is not out of step with the normal rate of blood clots in the general population.

Chagla said the normal incidence of blood clots is about one in 1,000 patients over the course of a year. When vaccinating millions of people, it is not unusual to see some of them develop blood clots.

The question is whether they could have had the clot without the vaccine. Chagla said these kind of investigations are totally normal in the rollout of any new pharmaceutical.

"This is what I think the European Union is going through," he said. "Now they're trying to say, 'Hey, is this an issue with the vaccine or are these people that we're just going to have blood clots regardless?' And you know, if it was the same thing as being struck by lightning, we would very easily say, 'Well, OK, the vaccine has nothing to do with people being struck by lightning.'"

Chagla said if a link is found, it may also be specific to one batch of the vaccine, which also has to be examined. Canada's doses, he noted, are currently coming from the Serum Institute of India, while Europe is getting its doses from facilities there.

Alberta's chief medical officer of health, Dr. Deena Hinshaw, said on Twitter that the blood clots are "extremely rare events in an area that is using a lot of this vaccine."

"There is currently no indication that vaccination has caused these events and the actions these countries have taken is out of an abundance of caution," she said. "We will continue watching closely and monitoring every dose of the vaccine in Alberta."

"We are continuing with our AstraZeneca inoculations and we know that several million doses have already been administered around the world with no adverse effects," she said.

This latest setback for AstraZeneca's vaccine came just after concerns about its efficacy in seniors started to wane. Several European nations reversed earlier decisions not to give it to people over 65 because there weren't enough seniors in the clinical trials.

Canada's National Advisory Committee on Immunization recommended seniors be prioritized for the mRNA vaccines from Pfizer-BioNTech and Moderna, which had more evidence of how they work on seniors.

The chair of the committee, Dr. Caroline Quach, told The Canadian Press the board met Wednesday to discuss newer evidence of how the AstraZeneca vaccine worked for seniors in "real-world" use, and expects an updated statement on the vaccine in Canada "in the next few days."

— With files from Sidhartha Banerjee in Montreal and Shawn Jeffords in Toronto.