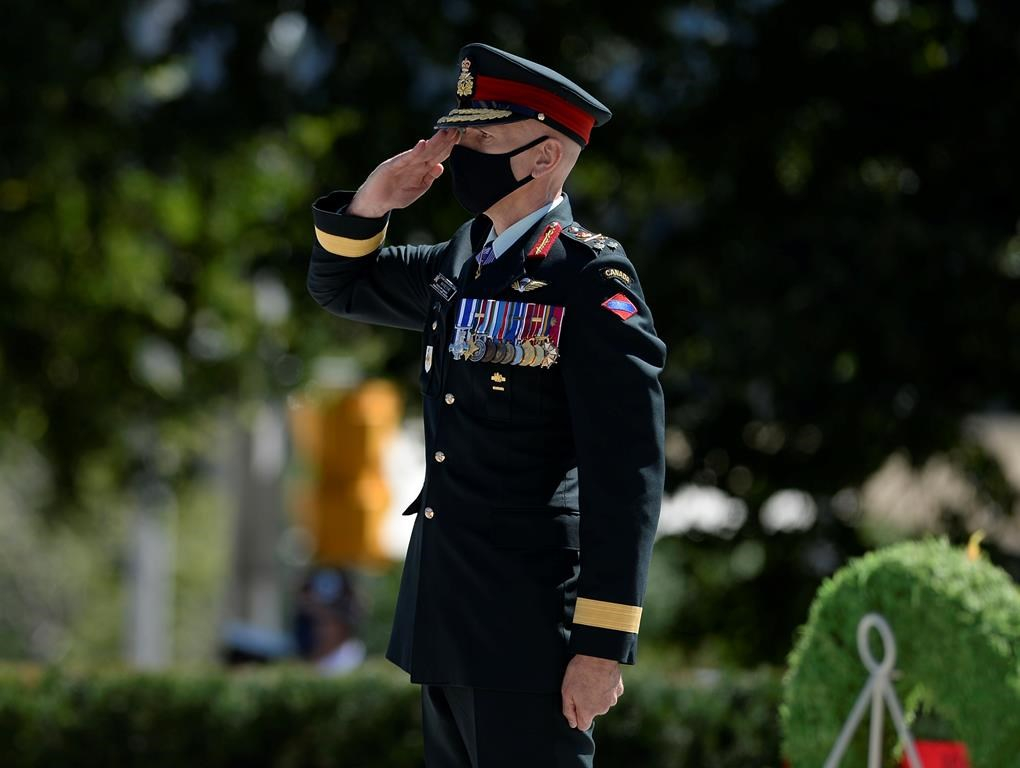 Lt.-Gen Wayne Eyre salutes after laying a wreath during a ceremony marking the 75th anniversary of V-J Day and the end of the Second World War, at the National War Memorial in Ottawa, on Aug. 15, 2020. File photo by The Canadian Press/Justin Tang
Previous story
Next story

The acting chief of the defence staff says the Canadian Armed Forces, grappling with allegations of misconduct at high levels, has no place for abusive and discriminatory behaviour.

Witnessing hateful acts and doing nothing means being complicit in these misdeeds, Lt.-Gen. Wayne Eyre told a defence conference Thursday.

And he stressed that strong leadership will be crucial to fostering genuine change.

Eyre took over as defence chief last month when Admiral Art McDonald stepped aside while unspecified misconduct allegations against him are investigated.

In addition, Gen. Jonathan Vance, McDonald's predecessor, is being investigated over allegations of sexual misconduct reported by Global News following his retirement.

Vance has denied any wrongdoing and McDonald has not commented.

Eyre said the accusations have been met inside the Forces with shock, disappointment, betrayal, sadness and a desire for real change.

"These last few weeks have been distressing for everyone in the defence community, military and civilian, serving and retired, and our family members alike," Eyre said.

"Amid the storm we keep our eyes on the horizon. But we know we must change."

It is becoming increasingly more evident that elements of the military culture are exclusionary and harmful, Eyre said.

The acting chief of the defence staff says the Canadian Armed Forces, grappling with allegations of #misconduct at high levels, has no place for abusive and discriminatory behaviour. #CAF

"They contribute to an environment that in some corners is permissive of racism, discrimination, harassment and sexual misconduct. These issues are systemic. We cannot accept our own people being harmed from within."

Eyre's pointed comments followed a panel discussion at the conference about how best to bring lasting cultural change to the Canadian Armed Forces, more than five years after the launch of Operation Honour to address sexual misconduct.

"We've seen slow but appreciable progress in Operation Honour, but we've got a lot of work to do," said Rear-Admiral Rebecca Patterson of the Canadian Forces Health Services. "I'm under no illusions there. And it's far from complete."

Eyre said the military has strived to increase understanding and awareness of the values for which it stands.

Anyone should be able to come forward with full confidence they will be heard and supported, and that appropriate action will be taken, Eyre added.

"I don't pretend to have all the answers or even a few of them. But I am determined to listen and learn and to work to regain CAF members' trust in leadership."

It will be critical to have leadership that understands the difference between the use and the abuse of power, and that is accountable for nurturing and sustaining change, he said.

"And this takes action starting from the top."